The state of Victoria has embarked on its most costly rail project, the 90km Suburban Rail Loop in Melbourne. But with costs spiralling, the wisdom of proceeding with what could be Australia’s largest rail project is being called into question, as Tony Duboudin reports. 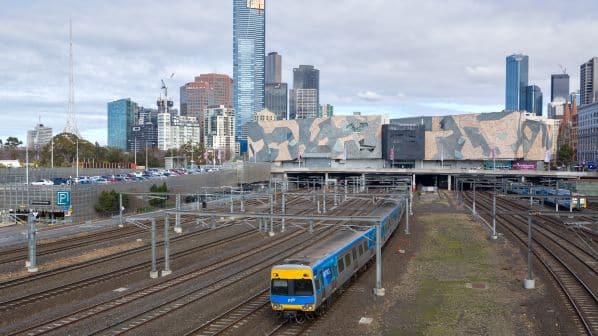 The rail loop will enable passengers to travel between suburbs and access suburban centres without having to travel into the city centre to change trains. Photo: David Gubler

DESCRIBED as a once in a generation project, Melbourne’s Suburban Rail Loop (SRL) will run for 90km from Werribee in the southwest suburbs to Cheltenham in the southeast. Its driverless trains will link the spider’s web of suburban lines serving the Victorian state capital and enable passengers to travel between suburbs and access suburban centres without having to go into the city centre to change trains. It will also create three major transport hubs at Clayton, Broadmeadows and Sunshine.

With the population of Melbourne predicted to grow to nine million by 2056, the SRL is considered necessary for a city of this size. This is despite Melbourne’s low population density of 479.6 persons/km² when compared with cities such as London where it is 4697 persons/km².

SRL will run both on the surface and underground, and the first section of the project, SRL East, has 26km of twin-bore tunnels between Cheltenham and Box Hill with six new underground stations. Tunnelling is scheduled to start in 2026. Three consortia have been shortlisted for the tunnelling work which will be divided into two contracts. The first contract to build twin tunnels between Cheltenham and Glen Waverley will be awarded next year. The second is for tunnelling between Glen Waverley and Box Hill.

The first two planned stages of the project, SRL East and SRL North, will be 60km long in total with 13 stations between Cheltenham and Melbourne Airport. Work on SRL East started in June 2022 for which the Victorian state government has allocated $A 11bn ($US 6.9bn). Work includes underground stations, maintenance facilities, substations, the acquisition of rolling stock and the development of surrounding precincts. The Australian federal government has confirmed its allocation of $A 2.2bn to the project, promised at the time of the federal election in May.

SRL East is expected to be completed by 2035, while it is forecast to take over 25 years to build the railway in its entirety. The project is certainly something that has been missing from Melbourne’s rail network but it has divided opinion, receiving particular criticism for its massive cost.

When the project was first announced in 2018, the Labor state government put the cost of SRL in the range of $A 30bn to $A 50bn, a figure that immediately sparked concerns. These were exacerbated by a report from the Victorian Parliament’s Budget Office published earlier this year, which said the cost of the SRL East and SRL North will exceed $A 125bn, more than double the original estimate. The report also said that the cost of operation for the first 50 years on the first two stages would add a further $A 75bn, bringing the total SRL budget to $A 200bn.

The Covid-19 pandemic is blamed for the spiralling cost, specifically the shortage of skilled engineers and other labour resulting from Australia effectively shutting its doors for two years, which brought a steady influx of skilled migrants to a virtual halt. However, the shortage of rail engineers and other workers pre-dates the pandemic and has been an industry concern for several years. One rail veteran joked that there was not one reasonably proficient rail engineer in Britain who had not received an offer to work in Australia.

The Victorian government has also been criticised for not submitting the project for appraisal by Infrastructure Australia, an independent authority that reports to the federal government. In the lead-up to the state election in Victoria on November 26, opposition leader, Mr Matthew Guy, promised to scrap the SRL project and divert the funding into the state’s ailing healthcare system if he won. He also urged the government not to enter into any contracts for the project, but his concerns were ignored.

From within the rail sector itself, the Australasian Railway Association (ARA) says that scrapping SRL could shake industry confidence in Victoria’s infrastructure programme and lead to poorer outcomes for public transport users. ARA CEO, Ms Caroline Wilkie, argues that building SRL would create a long-term pipeline of work, generate thousands of local jobs and help train the next generation of skilled workers in Victoria.

“The rail industry needs certainty to attract and retain skilled workers to support the successful delivery of transformational projects like the Suburban Rail Loop,” Wilkie says. “Having a clear pipeline of upcoming projects is vital, particularly with the significant number of major infrastructure projects underway or planned across the country.”

The Grattan Institute, a think tank based in Melbourne, has warned the state government over the huge cost of SRL, given that Victoria’s debt will rise to more than $A 167bn within four years, according to budget papers. “This project has been controversial from the get-go,” Ms Marion Terrill, transport and cities programme at the Grattan Institute, told the Australian Financial Review. “It was dreamt up in a very secretive way with no consultation with Infrastructure Australia.”

“The two biggest risk factors for cost overruns are premature announcements and large project size, with the Suburban Rail Loop an extreme case of both. We also have a mountain of debt, so this is a great way of getting further into debt when it is particularly expensive to build.”

According to the Grattan Institute, the SRL project is riddled with risk. Its research shows that larger projects have more risk. It says that projects with a cost when first announced of over
$A 1bn experience cost overruns almost half of the time, and the average cost increase is 30%. And if the project is announced close to an election, the average cost overrun is 23% higher than for similar projects announced at other times.

The wisdom of proceeding with SRL has also been questioned by the Rail Futures Institute, an independent advocacy group whose membership includes experienced rail professionals, engineers and economists. “We too question the validity of SRL’s business case demand estimates, cost and timing, and whether its net benefits are still positive in a post Covid-19 world, noting that it is yet to be objectively examined by Infrastructure Australia,” Rail Futures president, Mr John Hearsch, told IRJ.

“Victoria cannot afford the concurrent cost of more than one major public transport project of that scale and it would be tragic if another project is shown to be transformative with substantially wider benefits and needed far more urgently than SRL.”

Rail Futures has been developing the details of such a project for some time, a proposal with a working title of Melbourne’s East-West Rail. This combines a first stage of the long-proposed Melbourne Metro 2 with the best features of the Victorian government’s stalled Western Rail Plan, announced by the premier before the 2018 state election. East-West Rail aims to redress the disparity in the provision of public transport between Melbourne’s burgeoning outer western district and its eastern and southern suburbs.

“The rail industry needs certainty to attract and retain skilled workers to support the successful delivery of transformational projects like the Suburban Rail Loop.”

Hearsch says that Rail Futures was not advocating to scrap SRL, but wants the Victorian government to be aware that there is an alternative. Cost is one of the project’s major problems, but having examined the preliminary designs, Rail Futures believes that SRL’s interchanges with the existing rail network are in most cases unsatisfactory. It says that despite the government saying that changing between SRL and other lines will be easy, at three of the new stations passengers will have to come up to street level and then go down again to change trains. Local mayors also want a rethink of this aspect of the project.

In addition, Rail Futures believes that while the cost of building a project such as SRL was high in Victoria, the way the government did its costing was partly to blame. “They put on very significant loadings for risk and overheads which we think are excessive,” Hearsch says, these loadings representing around 30% of SRL’s construction cost. Rail Futures described the government’s ridership estimates for SRL as “very optimistic,” before Covid-19, and these look even more optimistic in the light of the changing work patterns that followed the pandemic.

The Grattan Institute is in agreement. “Now we’re facing a time of high uncertainty, we simply don’t know which of our new patterns of work and travel will become permanent, and it’s a brave person who would say all the projects conceived pre-Covid are the right ones for a changed world,” Terrill says. She points out that the government of New South Wales is slowing down the delivery of its major projects, recognising that there was just too much going on and the tight market for civil engineering and construction contracts was pushing up prices.

While SRL has grabbed the spotlight, the Victorian government has been successfully delivering two other major rail projects in Melbourne: the Metro Tunnel and the removal of 85 dangerous or congested level crossings. The Metro Tunnel is currently under construction and includes new twin 9km tunnels between the inner suburbs of South Kensington and South Yarra, serving five new underground stations.

The government says that the Metro Tunnel will create sufficient capacity on the suburban rail network to carry over 500,000 additional passengers a week during peak periods. It will achieve this by increasing the number of trains operating on the busy Cranbourne, Pakenham and Sunbury lines which will use the new tunnel, helping to ease pressure on the existing underground City Loop.

The approved budget for the Metro Tunnel stood at $A 12.58bn in May. Tunnelling work has been completed, and construction is underway on the five new stations as well as testing of the new High-Capacity Signalling system. The Metro Tunnel is currently due to open in 2025, a year ahead of schedule.

Elsewhere in greater Melbourne, 66 level crossings out of 85 have been removed by building new road bridges over and underpasses beneath the railway, with several stations rebuilt as a result. The project has been widely supported as something that should have been undertaken decades ago, as some level crossing gates were open to road traffic for less than 30 minutes in peak hours, creating serious congestion. The programme has been financed in part with the proceeds of granting a 50-year lease on the Port of Melbourne, which raised $A 9.7bn for the Victorian government. Some of the money also went towards regional infrastructure projects.

AN eight-member consortium including public and private partners has won a contract to provide detailed planning and delivery of a major package of works for the Melbourne Airport Rail project.

As part of the works, the alliance will deliver major improvements including:

When completed in 2029, the Melbourne Airport Rail project will provide passengers with a 30-minute journey time between the airport and Melbourne city centre and support seamless connections to both the regional and metropolitan rail networks.

The project includes building new dedicated tracks along the existing Albion - Jacana freight corridor between Sunshine and Airport West. A new station at Keilor East will be built to provide a public transport option for the growing communities in the area.

The line will divert from the freight corridor, crossing the Western Ring Road (M80) and head towards the airport following Airport Drive, before arriving at the new Melbourne Airport station.