After experiencing an economic crisis in recent years, Brazil’s economy was slowly beginning to recover at the start of 2020 - that is, until the Covid-19 pandemic hit, causing Gross Domestic Product (GDP) to drop by around 4.5% in 2020. 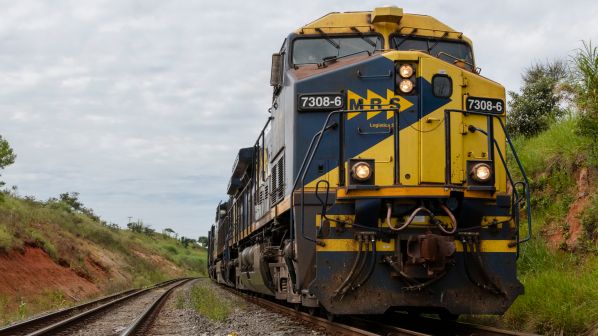 The renewal of freight concessions has seen billions allocated to Brazil’s freight network, but a severe drop in passenger numbers has resulted in the country’s transit operators entering 2021 in a very difficult situation. Photo: Shutterstock/Ariadne Barroso

WHILE social distancing measures and changes to travel patterns throughout the year impacted urban passenger rail, with falling demand resulting in a steep drop in revenue, the outlook for rail freight is promising, with private investment expected to lead to a significant increase in market share.

“According to the government, there will be investment of more than Reais 30bn ($US 5.8bn) in the sector in the next five years through an early renewal programme [of rail freight concessions],” says Mr Fernando Paes, executive director of the National Association of Railway Carriers (ANTF).

Paes says this funding will lead to a considerable increase in capacity as well operational improvements. “There are plans to invest in the expansion of yards and facilities, remodelling of lines, the acquisition of rolling stock and the development and implementation of new railway technologies and a significant number of works to eliminate urban conflicts,” he says.

This could lead to an increase in rail freight’s market share from 15-20% today to more than 30%.

The first of five concession renewals was signed by Brazil’s National Land Transport Agency (ANTT) and Rumo in May, extending Rumo’s concession for the 1989km Paulista network from 2028 until 2050, with an option to end the contract early in 2028. Under the agreement, Rumo will more than double annual capacity on the main grain export corridor in Brazil from 35 million tonnes to 75 million tonnes, with investment of Reais 5.78bn and grants of Reais 2.2bn.

The renewal of Vale’s Carajás Railway (EFC) and Vitoria-Minas Railway (EFVM) concessions were also signed in December. The renewal of the EFVM concession includes investment in the construction of the Central-West Integration Railway (Fico), a 383km line connecting the North-South Railway in Mara Rosa, Goiás, with Água Boa, Mato Grosso. The line will provide a direct route from one of the largest soya producing regions in Brazil towards the country’s major ports and is expected to carry 13 million tonnes of freight by 2025.

In order to fund this, the two concession renewals are worth Reais 17bn, along with Reais 1.75bn in grants.

Renewal of the MRS Logístics concession is currently at an advanced stage and includes investment of Reais 7.5bn to double capacity from 56 million to 107 million tonnes. The concession has been approved by the Investment Partnership Programme (PPI), although it is still awaiting a defined logistics plan.

VLI Logística’s Central Atlantic Railway (FCA) concession, which serves the southeast and midwest regions, is also expected to result in billions of Reais in investment but is still waiting for a business plan.

The renewal of Rumo’s Malha Sul concession is due to take place between 2021 and 2022, and should generate investments worth an estimated Reais 10.3bn.

“In addition to the contract renewal programme, in 2019 we signed the concession for the central section of the North-South Railway (FNS) with Rumo, which allocated more than Reais 2bn in investments,” Paes says. “Of the expected demand of 12.9 million tonnes by 2025, 6.3 million tonnes will be solid agricultural bulk freight.”

The federal government has also announced that, using a cross-investment instrument, it will allocate part of the grant resources to support other rail projects, including greenfield schemes such as the Midwest Integration Railway (Fico), or projects already underway, such as the purchase of rails for the West-East Integration Railway (Fiol), which is part of Vale’s concession renewal.

“Cross-investment will allow significant investments to be made in the railway network even in the context of the fiscal crisis of the last few years and now the pandemic,” Paes says.

The Federal Court of Accounts (TCU) has released the concession process for Fiol, which will link Ilhéus with Caetité in Bahia. This project will be run under a private sector contract and is expected to generate Reais 3.3bn when it takes place in the first quarter of 2021.

TCU is also considering the Ferrogrão concession, a new line that will connect Sinop, Mato Grosso, to Miritituba across the River Tapajós from Itaituba, Pará.

The president of the Brazilian Railway Industry Association (Abifer), Mr Vicente Abate, says that another process under evaluation is the privatisation and expansion of the Paraná West Ferroeste Railway, currently owned by the state of Paraná. “The expectation is that it will be extended to Maracaju (MS), providing a new point of access from the region to the port of Paranaguá, offering a less complicated route than via Malha Sul under a concession with Rumo,” he says.

Paes says plans for the extension of the North Network have been filed with ANTT, with investment estimated at Reais 6bn. Advanced engineering and environmental studies have been completed for the line, which will run from Rondonopolis to Cuiabá and the north of Mato Grosso.

“ANTF’s associates today have a robust portfolio of projects that, together, will promote in the coming months the beginning of a significant expansion of their transport capacity,” he says. “It is worth noting that the railways have diversified the portfolio of products transported, with an increasing emphasis on multi-modal consumer products.” For example, the transport of coffee for export resumed during the pandemic many years after it stopped.

“Cross-investment will allow significant investments to be made in the railway network even in the context of the fiscal crisis of the last few years and now the pandemic.”

Another change that could increase investment is Bill PLS 261, in the Federal Senate. The bill would provide an alternative to the concession system, using a simpler model of public service assignments predominantly to private companies. Abate says the model will eliminate the need to bid for concessions and could result in longer term contracts.

The improving performance of the rail freight sector is expected to give a much-needed boost for Brazil’s beleaguered railway equipment manufacturers.

“In 2019, when we manufactured 1006 wagons, it was rock bottom, as we went back to the same volumes as 10 years ago,” says Abate. “Last year, we already had a recovery, despite the volumes being affected by the pandemic. We expected to produce about 2000 wagons, but approximately 1600 were manufactured. We expect 2021 to be a year of recovery.”

However, Abate does not foresee a recovery in the passenger rail equipment market until 2022.

Mr Joubert Flores, president of Brazil’s National Association of Passenger Rail Operators (ANPTrilhos), says 2020 was a very difficult year for the passenger sector. In the second quarter, the most critical in Brazil, demand fell by almost 75%, with a peak drop of 84%. The problem is exacerbated in Brazil, because unlike other places in the world, loss-making services are not always subsidised. In Rio de Janeiro, there is practically no subsidy. “So, when you lose about 75% of the passengers, you also lose 75% of the revenue,” Flores points out. “How can you maintain the operation like this?”

Although the number of passengers has already increased, there is still concern. “Recovery will not be quick, as there are other issues besides Covid-19,” Flores says. “Public transport in Brazil is largely for people who use it for work, but today we have 14 million unemployed. In addition, between 20 and 30% of professional activities are being carried out virtually now, without commuting. Even those who need to travel prefer another means of transport. In 2021, therefore, things will return gradually.

“So far, the sector has accumulated a loss of approximately Reais 7bn. There is help from the government, which, although important, will have a small value, since a large part will go to bus companies.”

Despite the pandemic, construction of the monorail in Salvador continued, along with the restart of work on the Line 17-Gold monorail and the extension of metro Line 4-Yellow to Vila Sônia in São Paulo, while work on Line 6-Orange of the São Paulo Metro should resume.

Bids were invited in early December for a 30-year concession with an estimated value of Reais 3bn to operate lines 8-Diamond and 9-Emerald of São Paulo Metropolitan Trains Company (CPTM). Bids will be opened on March 2 2021.

However, some projects, such as the construction of the Line 4 branch to Gávea and studies for the planned Line 3 in Rio de Janeiro, have stopped due to a lack of funding. “Before the Olympic Games, Metrô Rio transported 900,000 people [per day],” Flores says. “With five new stations, it was estimated to reach around 1.1 million people. However, before the pandemic, it continued to carry 900,000 passengers.”

The difficult situation in the passenger sector is impacting the rail supply industry. According to Abate, passenger coach production averaged 344 cars per year in the past decade. However, this dropped to 99 cars in 2019. Last year, production reached 131 cars, a good part of which was for export, but so far there are no orders for 2021.