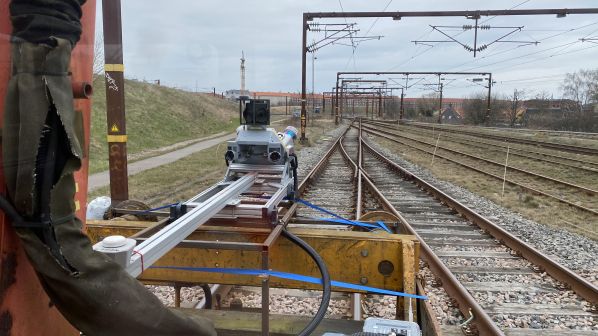 The mobile mapping system is mounted to the front of a rail vehicle.

THE Odense - Nyborg line in Denmark is a vital rail link between Copenhagen and Jutland as well as the corridor linking Sweden with Germany. With rail traffic growing year on year, the need to prevent the corridor becoming a bottleneck pushed Danish infrastructure manager Banedanmark to work on an upgrade. The goal was to not only increase capacity but also allow for higher line speeds.

For this purpose, the rail section needed to be surveyed in order to get an up-to-date digital view to serve as a basis for upgrade and expansion designs. This task was carried out six years before, but with the project postponed due to budget issues, the information gathered was no longer valid meaning a repeat survey was required.

The survey work encompassed the mapping of a 70km stretch of railway, including a particularly busy 35km double-track section. An additional and important specification was for a 1cm accuracy on all observed points. This came on top of another challenge: the fact that rail traffic could not be hindered. The 1cm specification meant that all points needed to be registered to a previous survey in order to detect change and assess the conditions for engineering.

For Mr Anders Nygaard Møller, business manager for engineering surveying at LE34, a surveying firm based in Ballerup, Denmark, the assignment’s demands posed a challenge. “I was not sure we could meet these requirements to survey 70km of one of the world’s most vital rail corridors without shutting down rail traffic, while keeping the survey crew out of harm’s way, and delivering the 1cm precision,” Møller says. “We needed to examine the entire route and identify any changes, plus add more detail in some areas.”

The infrastructure upgrade work involved replacing existing track in most sections and laying new track in others. In addition, many bridges and crossings needed to be redesigned. This meant all 3D models of the terrain and structural features along the route needed to be updated.

“We learned that finding the right driving speed is a matter of balance - going slowly enough to achieve the desired density, and fast enough to minimise the time between control points.”

Using traditional surveying methods, the task would take weeks to complete and would likely lead to service interruptions. This meant that Møller had to think beyond the usual tactics. The firm already had some experience with mobile mapping: the technique of surveying from a moving vehicle with integrated scanning and imaging technology to collect point cloud data, combined with rich imaging. Mobile mapping systems are equipped to gather these points at high speeds, in this case in order not to disrupt the train schedule.

Speed wasn’t the only challenge - it was the combination of speed and the sub-centimetre accuracy. In a tendering process, the team had gained some experience with asset mapping for the national railway. LE34 lost that particular bid to a firm that used mobile mapping, albeit with a low-precision system. Even though mobile mapping had been a proven technology for years, in the minds of many it could only reach a 2-5cm accuracy level. LE34 therefore needed a system that would deliver data to engineering precisions.

In order to get to a system that would perform at a sub-centimetre precision, the LE34 team chose its new Trimble MX9 mobile mapping system as the basis. This features a combination of dual high rate and precision scanner heads, a 30Mp spherical camera, 5Mp fore and aft cameras, and a combined gyro-GPS positioning module. The GNSS and inertial data from MX9’s GNSS receiver and inertial measurement unit are processed together in Applanix POSPac software. The system can maintain high precision between control marks, but accuracy can degrade if there are lengthy GNSS outages or the control points are far apart.

“The original survey took several months, but in the course of the survey we had established dense control over the entire 70km rail section,” Møller says. “And the control data from the old survey was still good.” With both the right corresponding technology for survey control in place and strict procedures for both surveying and processing defined, testing was next.

“There was a smaller project in Copenhagen on which we had already tried out our MX9,” Møller says. “We learned that finding the right driving speed is a matter of balance - going slowly enough to achieve the desired density, and fast enough to minimise the time between control points.”

For the Odense - Nyborg line test, LE34 mounted the MX9 on a rail maintenance vehicle. Møller wanted to test out different methods, with different control densities to ensure they could deliver reliable and repeatable sub-cm results. Their tests showed that a speed of 45-50km/h was optimal for the project. LE34 then tested different ways to process the inertial data combined with post-processed kinematic (PPK) GNSS by adjusting various parameters in the office software.

It paid off. “We were very happy to see our results coming in at 7mm,” Møller says. “We met the specs for the rail project and we saved a lot of time. All-in-all it took two of our surveyors one week to set everything up. It then took only a few days to verify the control. We performed the work safely while the train schedule was in full operation. And it only took four hours to scan the entire stretch of railway.”

The application of the MX9 technology meant that LE34 further developed its capability for providing customers data access in their desired format. The system accommodates multiple post-processing options and standard data outputs.

“Sometimes we do extraction in the Trimble Business Centre,” Møller says. “But for other clients we can customise output to go to Bentley products, TerraSolid or others.”

In this instance LE34’s dedicated software team of 24 developers worked on providing tiled, full resolution, true colour cloud access and navigation for their rail authority client with a web-based tool of their own design. The rail authority was pleased with the end results and services and, based on the success of LE34’s work, it has approved mobile mapping as a standard method for surveying rail infrastructure.

Confident in this solution, LE34 was ready to embark on it’s next rail survey, one encompassing 230km of track.