After years of assistance from France, Morocco’s IFF training centre has begun offering its services to the rest of Africa. David Burroughs talks to IFF general manager Christophe Martin in Rabat about how the centre is stepping out on its own. 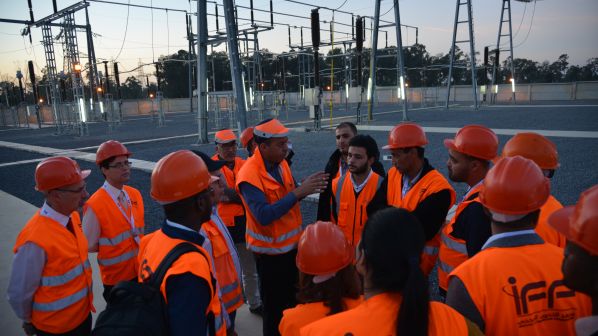 FOR any railway to operate successfully, it requires well trained, competent staff. So, as Morocco began the process to construct its first high-speed line in 2011, French National Railways (SNCF) and Moroccan National Railways (ONCF) signed a preliminary memorandum of understanding (MoU) to create the Railway Training Institute (IFF) in Rabat as one of three main “pillars” to support the development of the railway.

This was followed by the signing of a final MoU in April 2013, leading to the opening of IFF for its first training session on March 30 2015. Since then, the centre has trained around 6000 new employees a year, and in 2018 offered a total of more than 33,900 training days. Of these, 68% were from ONCF and 28% were from SNCF, with the remaining 4% from other railways.
IFF is split 50:50 between ONCF and SNCF, with ONCF represented by Mr Karim Effine Chennouf, who sits as chairman of the management board, and SNCF represented by Mr Christophe Martin, who is IFF general manager.

“One of the goals of IFF was to transfer skills from France to Morocco so it could operate a high speed line by itself,” Martin says. “The whole project was built like this, with a strong partnership between the two companies. IFF was part of the project to train all the employees that will take part in the high speed services - train maintenance, station management and sales - everything.”

“We have the driving simulator and from now on, people from ONCF and IFF have taken on the onus to train the train drivers”

While the main focus was always on passing on France’s knowledge to train Moroccans to operate and maintain the line independently, there has also been an emphasis on transferring instructor skills, so that when the next generation of engineers or sales staff come through, they will likely be taught by an ONCF staff member.

Before the opening of Morocco’s high-speed line in November 2018, six drivers from ONCF were sent to France to learn how to drive the trains. They were also trained as instructors, learning how to teach the next generation of high-speed train drivers.

“We have the driving simulator and from now on, people from ONCF and IFF have taken on the onus to train the train drivers, and we are trying to do this for every skill,” Martin explains.

“Next year, they hope to support a strong contingent from Senegal to attend IFF’s centre in Rabat as they prepare to operate the Dakar TER project. ”

After developing a successful base to train and develop staff in Morocco, IFF is now looking to expand its reach and build on the 4% of trainees from other railways, with staff from Gabon, Senegal and Burkina Faso already involved in the centre.

The partnership with Gabon involves not only training staff, but also helping them to develop their own training centre. IFF recently sent a group to the west African country to teach Gabon’s trainers, assisting them to develop design engineering modules. Gabon has also received a new driving simulator, and IFF taught their instructors how to manage the simulator, conduct exercises and build simulations.

Next year, Martin says they hope to support a strong contingent from Senegal to attend IFF’s centre in Rabat as they prepare to operate the Dakar TER project. The 57km 14-station standard-gauge line from Dakar city centre to the new Blaise Diagne International Airport (AIBD) near Ndiass largely follows the western stretch of the metre-gauge Dakar - Diourbel line, which is being upgraded as part of the project. The training is currently taking place in France, but Martin says this will soon be split between France and Morocco.

“It’s very practical, but it’s also proof that you have the competences here in Africa. It’s probably cheaper for the company, and it’s culturally maybe closer,” Martin says. “They share some history and culture, although Gabon is very different from Morocco, but historically Gabon and Morocco have strong relations.

“I think it’s interesting because the need to increase intra-continental business is a big challenge at the moment, and there is a strong demand from railways in Africa. Many countries are still looking for financial solutions to their needs, but once they have their finance, and once they renew their network, they have a strong need for training in order to maintain and develop their structure, to develop the business, to develop the safety of the network.”

Cultural alignment is an important factor for companies considering using IFF’s services, and a marked point of difference from training staff in Europe. The techniques and skills are the same as those taught in France, but the way they are taught and implemented is different. When they first visit Morocco, the trainers from SNCF usually take a week or two to get used to Moroccan culture, in order to better understand how Moroccans work.

For example, it would be normal in France for an employee to speak to his manager if he thought something wasn’t right, or if there was a better way of doing something. But traditionally in Morocco, “the boss is always right,” and the students are not used to speaking up.

“Theoretically they agree, but I am sure when they go back to the office, it is very difficult for them to put it into action,” Martin says. “But the older generation is leaving, the new generation is coming in as managers, so I think things will change.”

Instead of trying to completely change the culture, the trainers are focused on ensuring that processes and procedures are followed. Martin says ONCF staff know what the gaps in their knowledge are, and are very focused on filling them and improving safety on the network, while also becoming industry leaders.

But it’s not just a one-way transfer of knowledge; Moroccans are also sharing their understanding and experiences with French staff and trainees. “They speak the same language - the railway language,” Martin says. Moroccan regulations are quite close to French rules because of historical connections, which facilitates the process.

Asked about the IFF’s medium to long-term goals, Martin says the centre is aiming to become more independent from both ONCF and SNCF, while also expanding its offer to attract more students and staff from across Africa - especially eastern Africa. But in order to do this, the centre will need to begin offering lessons in English to cater to non-French speaking countries.