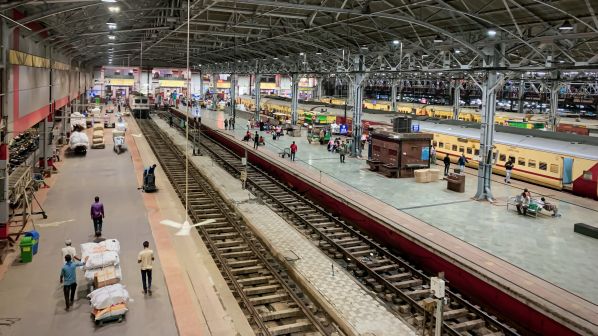 Services on the line are due to begin in December 2023, but it is yet to be seen whether this goal will be met. Photo: Shutterstock/Hitman H

These include how real are fears that the project - India’s first high-speed railway - is likely to miss its December 2023 completion deadline and suffer higher costs. With execution work on the line at a standstill for the last three years, what is the justification to invite tenders to prepare Detailed Project Reports (DPRs) on six other lines? What are the reasons for the variance in figures furnished by NHSRCL and the state governments of Gujarat and Maharashtra regarding land acquisition? How will the project re-start in Maharashtra following the decision by Mr Uddhav Thackeray, the state’s new chief minister, to halt execution work on a scheme he describes as a “white elephant”?

Khare faces other challenges too. In the wake of the coronavirus pandemic, the Indian government has banned all foreign nationals from entering the country, which is likely to adversely impact project implementation. Indeed, 80% of the Rs 1 trillion ($US 14.6bn) needed to fund the project will come from a 20-year Japan International Cooperation Agency (Jica) loan of Rs 880bn with a 1% interest rate and a 15-year moratorium on repayment.

Another problem concerns the ever-widening gap between the Indian rupee and the Japanese yen. When the contract was signed in 2014, the value of the Jica loan component was estimated at Rs 880bn, but the fall in the value of the rupee against the yen is estimated to have increased the cost of the project by Rs 430bn. “The Memorandum of Understanding between the two countries covers depreciation costs, but not currency fluctuations,” Khare admits.

If the rupee does not stabilise, the Indian government could well end up paying substantially more to repay the loan in addition to the interest payments to the Japanese government. “The Delhi Metro had a Jica loan of approximately Rs 10bn in 2002 but ended up paying back Rs 17bn, an increase of 70%, after the end of the 10-year moratorium in 2011-12. A similar situation cannot be ruled out in respect of the loan for the high-speed project,” former Railway Board member, Mr Subodh Jain, warns.

“These are time-consuming and complex issues, but it is difficult to proceed without resolving them first.”

Additionally, the trend of spiralling project costs does not appear to have been halted. From the initial estimate of Rs 970bn, the project cost climbed to Rs 1080bn after the Indian government opted for an almost entirely elevated line, and there have been indications lately that the project cost could rise still further.

“Some changes in project costs are likely because of certain alignment changes and engineering modifications,” Khare says. “For example, instead of the earlier plan to use drilling and blasting for tunnelling, it has been decided to use 13.2m-diameter tunnel boring machines to bore tunnels beneath Thane Creek near Mumbai where there is a flamingo sanctuary. Design changes have also been made to the construction of Vadodara’s high-speed station because the height of the station and overhead wires in the original plan would have interfered with the guidelines of the Airport Restrictions Zone.”

Project costs are also likely to escalate because of the growing demand from farmers for a bigger compensation package in exchange for surrendering land for the project. Farmers in Maharashtra and Gujarat have refused to part with their farmland for the project.

NHSRCL has faced growing criticism regarding the slow progress in executing the project. Early last year, the corporation floated nine civil work tenders out of the total of 14, but the opening date of the financial bids was continuously pushed back from November last year to January and then March this year. Now, the latest projections are that the bids will not be opened until November. “Unless the monetary issues are sorted out between India and Japan, it will not be possible for NHSRCL to open and award the tenders,” an official earlier associated with NHSRCL says.

“Some changes in project costs are likely because of certain alignment changes and engineering modifications.”

Unofficial estimates are that the Japanese component of the project has nearly doubled and that NHSRCL has been under pressure to revise its financial estimates. Khare, however, maintains that the exercise to formulate the project estimates will be undertaken after the bids are opened. Regarding the decision to push back the tender opening date, he said that this had been done on account of the corporation’s other preoccupations.

In addition, an agreement on moving utilities to build the high-speed station on a 76 hectare site at Sabarmati in Gujarat has also been reached, while a high-speed training institute has been constructed at Vadodara and will open in December.

“These are time-consuming and complex issues, but it is difficult to proceed without resolving them first,” Khare says.

However, major tasks remain. A joint venture for rolling stock assembly or manufacture has yet to be agreed. “Japanese companies such as Kawasaki and Hitachi have been in talks with Indian public sector undertakings, such as Bharat Heavy Electricals Limited (BHEL) and Bharat Earth Movers Limited (BEML), and an agreement is expected to be firmed up soon,” Khare says.