Ensuring high levels of safety and reliability on intensively used networks demands a proactive approach to infrastructure monitoring and a willingness to explore new measuring technologies. Keith Barrow looks at how Network Rail is gaining valuable insights into the condition of its assets through its fleet of measurement trains. 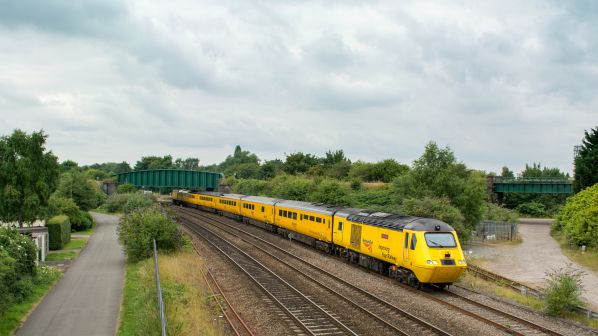 AT 12.23 on October 17 2000, the 12.10 London King’s Cross - Leeds GNER service derailed at Hatfield, killing four people and injuring more than 70. The initial investigation into the derailment traced the cause to a rail break resulting from rolling contact fatigue (RCF).

Unable to specify the risk of a similar incident elsewhere on the network, former infrastructure manager Railtrack imposed more than 1800 temporary speed restrictions and launched an emergency programme of rail renewals worth an estimated £580m. The ensuing disruption to the British economy was estimated at £6m a day and cost train operators millions more in lost revenue.
Railtrack incurred £733m in costs and compensation payouts as a result of Hatfield and the company entered administration in October 2001.

The investigation into the derailment found that Railtrack lacked an overall strategy to manage the maintenance of rail and had failed to focus on the poor quality of maintenance that was the root cause of the rail breakage. During privatisation, the engineering skills and knowledge that had underpinned safe operation of the railway had passed from British Rail to private maintenance and renewal firms. Railtrack’s attention was focussed squarely on the operation of the railway but it lacked the engineering competencies needed to ensure it could fulfil that role safely.

The ‘yellow train’ fleet is operated by NR’s data collection division, which has four core responsibilities:

Most of the main line network is visited by a measurement train at least once every four weeks, generating huge quantities of asset data and helping to support NR’s migration from a find-and-fix maintenance regime to predict-and-prevent.

“Hatfield was a catalyst for a lot of change,” explains Mr Steve Quinby, NR head of delivery, data collection. “A lot of work was done around rail inspection as a result of that and we have far more confidence in the integrity of our assets today.”

The NR measurement fleet is broadly divided into slow, medium and high-speed vehicles. Operating speed is generally determined by the limitations imposed by the instruments used for the measurements or the need for high-output data resolution. Slow-speed trains include the Structural Gauging Train, which is equipped with Balfour Beatty’s LaserFlex laser surveying system, and the fleet of five Ultrasonic Test Units (UTUs). The UTUs are equipped with Sperry rail flaw detection systems, bogie-mounted laser rail profile measuring units supplied by KLD Labs and Ground Penetrating Radar (GPR) to monitor the condition of the formation at a depth of up to 1500mm below the top of the sleeper.

Investment in the UTU fleet has significantly reduced manual site inspection and provides accurate data on the initiation and growth of RCF and as well as other factors determining rail life. Data from the UTUs is linked to other data streams such as track geometry to gain a better understanding of the factors influencing RCF. With better data, NR has been able to optimise its rail grinding strategies and the use of premium-grade rails to reduce the risk of RCF at specific sites.

Investment in the ultrasonic test fleet has resulted in a massive reduction in the number of broken rails, which declined from 952 in the 1999-2000 financial year to just 76 in 2017-18.

The medium-speed fleet operates at up to 145km/h and includes vehicles for overhead line inspection, track recording, radio survey and Plain Line Pattern Recognition (PLPR). Most of these are converted from passenger coaches and operate with locomotives although the fleet includes self-propelled Windhoff Multi-Purpose Vehicles (MPVs), which are equipped with a track geometry measurement system and Balfour Beatty Omnicom video survey equipment. The MPVs are used for inspecting switches and crossings in complex areas such as junctions and stations.

The flagship of NR’s infrastructure monitoring fleet is the New Measurement Train (NMT), which was converted from a 200km/h HST inter-city diesel train, making it easier to schedule measurement runs on busy main lines.

The NMT covers 185,000 route-km a year in 2000 recording shifts, with a regular recording cycle encompassing all of Britain’s main lines. For every 700km of track the NMT captures around 10 terabytes of image data, which is recorded onto 21-terabyte portable hard-drives. These are removed for analysis at the end of a shift. Quinby says NR is looking to increase the volume of data processed onboard the train.

Dubbed the ‘Flying Banana,’ the NMT is formed of two class 43 power cars, two track recording cars, a conference car, a service vehicle and a mess coach, with a team of technicians overseeing the train’s seven inspection systems. The primary measurement systems are located in the so-called production vehicle. The other measuring car is known as the development vehicle and was originally intended for the development of new technologies, but is now equipped with production systems, notably the PLPR system and the Overhead Line Electrification (OHLE) inspection system. A GPS system is used for data location and the train is also equipped with forward-facing cameras, which are mounted below the power car cab windscreens. NR says all data location stamps are accurate to within less than a metre

NR began developing PLPR on the NMT in 2013 and train-borne PLPR has now replaced manual inspections on nearly 14,000km of track with the potential to extend coverage to 24,000km. During Control Period 6 (2019-2024) PLPR inspections will cover an estimated 1.57 million track-km.

The PLPR system monitors rail heads and sides, rail fastenings, sleepers and ballast using an array of seven cameras to generate an image every 8mm, equivalent to 70,000 images per second at 200km/h. PLPR operates alongside LiDAR, which ensures fittings such as rail clips can still be detected if they are obscured by objects such as loose ballast.

The NMT’s unattended track geometry measuring system uses 47 sensors to record data, which is then used to calculate a standard deviation (SD) value for every 200m of track, showing how far the track deviates from the ideal geometry. This gives NR a picture of the general condition of a line’s track geometry, enables trends to be identified and highlights deteriorating sections of track where maintenance actions such as tamping or stoneblowing may be required.

Algorithms are used to scan digital imagery gathered by the NMT for possible anomalies, or as NR terms them candidates. The candidates are examined by inspectors at the data analysis centre in Derby to confirm the presence of a fault and the urgency of any response.

If an irregular feature is detected the image is referred to an inspector. A team of 30 people based at Derby process this data in two shifts. The inspector can view seven corresponding images of the rail where the suspected fault was detected and use this information to decide if an intervention is required. Under Railway Group Standards, the processing team has a maximum of 72 hours to confirm the data and send a fault report to the local track section manager.

If an urgent defect such as a rail fracture is detected, the on-train engineers are notified immediately by an alarm and the train stops, blocking the affected section of track. The line can then be closed to enable rectification of the fault.

On the roof of the train, a non-contact overhead line inspection system from Fraunhofer IPM uses lasers to triangulate the lateral and vertical position of the contact wire. A camera can detect wear in the contact line to within 0.3mm. Like PLPR, the overhead line inspection system operates at up to 200km/h and can even detect contact wire changeovers when running at speed. Run-on-run analysis of OHLE data is carried out by a staff at Milton Keynes, which issues a report to an electrification maintenance team if an intervention is required.

In addition to its day-to-day infrastructure monitoring role, the NMT has supported academic and industry research and development initiatives including the University of Birmingham/ Engineering and Physical Sciences Research Council real train aerodynamics project and the Railway Safety and Standards Board T923 axle-end acceleration measurement project.

Despite the success of the measurement fleet in improving the safety and reliability of critical infrastructure, there is pressure to reduce the number of ‘yellow train’ movements on the network to free up valuable train paths, which are increasingly in demand as traffic continues to rise.

New passenger train fleets including the Crossrail and Thameslink commuter EMUs in London and Intercity Express Trains for the Great Western and East Coast main lines are being equipped with unattended monitoring systems. At the same time, the spread of ‘intelligent infrastructure’ means remote monitoring of assets will become the norm. However, NR says there will be an continuing need for train-borne measurement capability that commercially operated fleets will not be able to provide and some data streams such as ultrasonic testing, structural gauging and PLPR do not lend themselves to service-train data collection.

“The fleet has given real value in terms of enhancing our data collection capability,” says Quinby. “We wouldn’t be able to run all of the passenger and freight trains we have using the network today without the improvements we’ve made in how we measure and maintain the railway over the last 15-20 years.

“We have one of the safest railways in Europe and a high level of confidence in the condition of our assets. Bolting lots of different technologies to a single train allows us to achieve this very efficiently.”