Network Rail has released its delivery plan for Control Period 6, outlining its spending priorities for the £42bn it is due to receive from government over the next five years. David Burroughs looks at how this money will be used, and what it means for the regions. 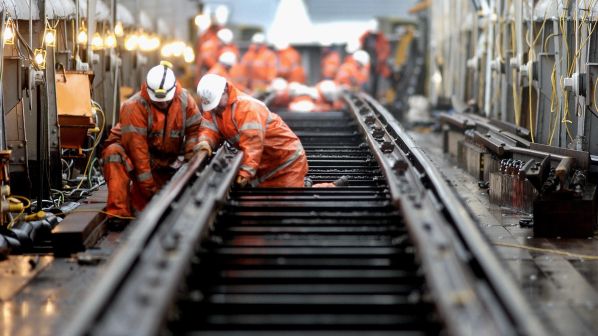 CHANGE is in the air for those tasked with managing and maintaining Britain’s rail infrastructure and operations, as infrastructure manager Network Rail (NR) looks to regain the trust of passengers and other customers.

“Train performance, our promise to passengers, has been in decline for the last seven years,” says NR chief executive, Mr Andrew Haines. “The disastrous start to the new timetable in May 2018 further undermined public trust in our ability to deliver a reliable service. In recent months, it has become clear to everyone in the rail industry that we have to do something very, very different.”

NR’s funding is made available from the British and Scottish governments over five-year periods, known as control periods, with Control Period 6 (CP6) starting on April 1 and running until 2024.

Day-to-day operations will be devolved to the routes, while NR will delegate more central functions including infrastructure projects and elements of system operator, safety technical and engineering, and group Digital Railway programmes to the regions.

NR’s plans focus on improving punctuality and reliability through delivering better assets, timetables and information, and working more closely with operators. For the first time, the regions have been granted individual budgets.

NR says it will introduce the structural changes in four phases, with the first - the development of the routes - due to begin in summer 2019.

“In order to effectively deliver our plans for CP6, and to rebuild trust with those that use the railway, we must change the way we work, both within our own organisation and with the rest of the industry,” Haines says. “We are embedding a customer service culture at every level and from now on we will work together to put passengers first.”

Earlier this year NR accepted the Office of Rail and Road’s (ORR) final determination, which set out what should be delivered with the available funding. The publication of the delivery plans have also gained support from the rail industry.

“With Britain’s railway one of the most congested in Europe, the last five years has been about delivering mega-projects to boost capacity,” says Rail Delivery Group CEO, Mr Paul Plummer. “Now, it’s time to get back to basics with train operators and NR working even more closely together at a local level to ensure the trains run on time.”

The current London North Eastern and East Midlands (LNE & EM) region will be split into the East Coast Route, the North East Route and the East Midlands Route, which together will form a large section of the Eastern Region.

Over the next five years LNE & EM plans to invest £5.45bn to improve services and renew the railway, and will also make step-change improvements that directly benefit passengers by investing £800m.

Major works planned for CP6 include the Transpennine Route Upgrade, which will enable more frequent services on the Liverpool - Manchester - Leeds corridor; East Coast Main Line (ECML) improvements, which include improving the layout of track and signals outside London King’s Cross to deliver faster arrival and departure times, building a ‘dive under’ at Werrington to separate slow-moving freight from inter-city passenger services, and power upgrades between York and Edinburgh; and the Midland Main Line upgrade, which includes completing electrification of the line from Bedford to Kettering, Corby and Market Harborough.

LNE & EM will also focus on recruitment and investment in workforce facilities, with 45% of its workforce becoming eligible for retirement in the next 10 years.

The Anglia Region, due to become the Anglia Route under the Eastern Region, plans to invest £2.2bn between 2019 and 2024, but a significant growth in passenger numbers is expected to pose challenges to the route.

In Suffolk, a new 1.3km passing loop will significantly increase freight capacity from the Port of Felixstowe, and will also improve reliability and make the railway safer by removing and upgrading level crossings.

Semaphore signalling equipment between Norwich, Yarmouth and Lowestoft is due to be upgraded, while a quarter of the track across the route as well as overhead electrification on the London Fenchurch Street - Shoeburyness line and at Stratford in east London will be replaced or refurbished.

Anglia is also stabilising embankments and installing uninterruptable power supplies, and upgrading and closing level crossings. The route plans to invest £350m on the modernisation of signalling in Cambridge and Clacton and on the North London Line.

The London North Western (LNW) region will be split into the LNW North and LNW South routes. Passenger demand is forecast to rise by 12% by 2024 with freight demand set to increase by 18%, but the region is looking to improve on its performance in CP5.

“In CP5 we delivered many railway upgrades in the North West,” says LNW route managing director, Mr Martin Frobisher. “Train performance and project delivery, however, did not always meet passengers’ expectations. We were overly ambitious in our desire to please customers. We have learnt from this.”

The region has been allocated £5.7bn for its core maintenance, renewals and operations programme, while a number of targets have been set including improving safety by 60% on 2017-18 levels.

LNW plans to renew 1120km of track and 60 points, and its works delivery includes a £1.3bn work bank, helping to implement its £2.7bn renewals portfolio. LNW also plans to improve asset reliability to cut service-affecting failures by 1% a year.

However, LNW is set to face a number of challenges during the period, including the construction of High Speed 2 (HS2); accommodating growth at London Euston with two fewer platforms to allow HS2 works; Crewe resignalling and remodelling; earlier morning and later evening services which will reduce the overnight window for engineering access; and greater customer expectations in CP6 to improve on current performance.

The structure for Scotland remains unchanged, while the enhancements planned for completion in CP6 will build on the improvements made in CP5, namely boosting service frequency and capacity.

The period will see the rollout of smart ticketing across the network while NR will also support a targeted growth in rail freight (p28).

The renewal of Carstairs Junction, the largest project in Scotland’s CP6 plan, includes 35 point-end interventions and 10km of plain line track renewal, as well as the renewal and refurbishment of signalling equipment. The renewal of the obsolete Edinburgh train control system is also scheduled for CP6.

At Perth, the region is integrating the renewal of a 57-year-old signalling system with the proposed Seven Cities enhancement project.

Significant work will be undertaken on the New Clyde Bridge in Glasgow and the Forth Railway Bridge; renewal and refurbishment works on 256 structures; upgrading the 10 highest-risk user-worked level crossings; repairing, maintaining or renewing more than 900km of track; completing the upgrading of Glasgow Queen Street station; and completing the Aberdeen - Inverness Improvement Project.

The South East Region will become the Kent Route, through which the Network Rail High Speed route (HS1) will run. The two routes will then form part of the Southern Region along with the Sussex and Wessex routes.

The route, which carries more than a third of the country’s rail passengers and has experienced a 20% growth in freight traffic since 2014, has been allocated £4.3bn, up £1bn from CP5.

“We recognise that train performance on the South East Route has been amongst the worst in the country during CP5,” says route managing director, Mr John Halsall. “That’s simply not good enough and our passengers deserve much better.”

NR will carry out re-signalling at London Victoria, extend the life of major signalling centres at Ashford and Gillingham and relocate the Kent Integrated Control Centre, with an extra £66m allocated to address the long-term decline of track and metallic structures.

Other investments include the replacement of 662km of rail; the renewal of 18 level crossings; improving the condition of 300 earthworks in the worst condition and installing more earthwork movement monitoring systems; work at more than 150 stations; and electrical work to improve safety, including £20m of works at train depots including Grove Park, Slade Green and Ramsgate.

The Wales region, due to become a route under the Wales and Western Region, is looking to build on the improvements made in CP5 including electrification of the Severn Tunnel, the re-signalling of the North Wales coast line and Cardiff area resignalling.

“Our plan is made up of over 1000 local schemes designed to deliver improvements for as many passengers as possible,” says route managing director, Mr Bill Kelly.

The planned £2bn investment in CP6 represents the biggest ever devolved budget for the Wales and Borders Route.

Enhanced maintenance strategies, greater use of remote condition monitoring and a ‘predict and prevent’ approach is expected to achieve a 6.6% reduction in operating expenditure.

The Wessex Region will be split into the Wessex Route and the Sussex Route, which will both form part of the Southern Region. There are 212 million passenger journeys across the network annually, while London Waterloo station is the busiest in the country with around 330,000 passengers a day.

The region has been awarded more than £2bn of funding in CP6, 20% more than CP5. Service improvements from enhancement projects will be funded and delivered separately on a rolling basis with the Department for Transport (DfT) and third-party investors.

Work includes resignalling at Feltham in west London and the Farncombe - Petersfield section of the London - Portsmouth main line.

More than 320km of track and 292 points are due to be replaced, while NR will lay nearly 32km of new power cables and replace old conductor rails.

The Western Region, which will become the Western Route under the Wales and Western Region, will complete the remaining funded elements of the Great Western Modernisation Programme including electrification to Cardiff and Chippenham. Work will also take place to complete the remaining elements of the Crossrail works required at stations and integrate the new Elizabeth Line services into daily operations (p36).

£40m will be invested in the renovation and refurbishment of the heritage roof at Bristol Temple Meads, while £50m will be spent to reduce delays in and out of London Paddington by replacing more than 700 track circuits.

CP6 also includes the South West Rail Resilience Programme to enhance the coastal main line at Dawlish, and NR will continue working to develop proposals on behalf of the West of England Combined Authority for Bristol’s Metro West Phase 1 and Phase 2.

Freight and National Passenger Operators (FNPO), which does not directly manage assets or control train operations, was established to support operators whose interests extend network-wide and across NR’s geographical routes’ boundaries.

FNPO has set a freight punctuality target of 94%, a 90% PPM for CrossCountry services and an 80% target for Caledonian Sleeper services to arrive on time.

Investment plans include a £22m safety improvement programme, and NR will develop a case for investment in key rail freight corridors to improve links with ports and quarries.

A digital railway programme is underway to install ETCS equipment on the initial 16 classes of freight locomotives as part of a wider programme to fit the whole fleet. Early discussions are also underway with charter and heritage train operators.