Evraz North America has developed a patented rail alloy which is designed to improve performance in areas ranging from shallow curves in arid climates to severe curves on mountainous high-tonnage lines with punishingly cold temperatures, such as the North American Rocky Mountains. 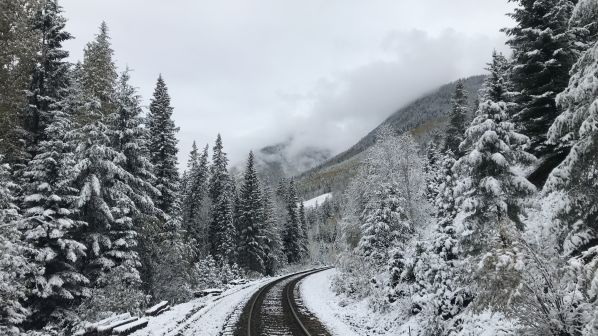 Evraz North America has developed a patented rail alloy which is designed to improve performance in areas with punishingly cold temperatures, such as the North American Rocky Mountains.

The conventional approach to extend rail life during the last century was to increase hardness by increasing the rail carbon content. Improvements to rail hardness and performance were achieved in the 1980s and 1990s by applying head hardening to existing steel grades. The use of hyper-eutectoid rail steel compositions further improved resistance to wear in the most severe conditions. The increase in carbon content beyond the near-eutectoid level also introduced compromises in ductility and fracture toughness, which is typical of many materials.

The development of the new Apex G2HH ultra-premium strength rail grade has been completed. It involved advances in rail manufacturing practices including steelmaking, alloy strategy, rail rolling, and head hardening.

To demonstrate the improvements we will compare the performance of Apex G2HH against a current generation premium rail grade (DS) commonly used in cold weather environments on North American heavy-haul lines and a non-head-hardened standard strength (SS) rail grade.

A constant slip ratio of 10% was maintained by controlling the rotational speed of the two disc samples.

The American Railway Engineering and Maintenance-of-way Association (Arema) best practice guidelines define rail strength as standard, intermediate or high strength with rail surface hardness minimums of 310HB, 350HB, and 370HB respectively. Although there is no defined performance level beyond high strength rail, a hardness threshold of 400HB is a reasonable metric on which to base next generation rail performance.

Modifications to rail alloy systems are used to increase strength by manipulating the austenite to pearlite phase transformation during the head hardening process. The G2HH grade was designed with higher levels of alloying elements that promote a fine pearlite microstructure and a carbon level that complies with Arema guidelines.

Figure 2 shows the tensile yield strength and ductility for the G2HH grade compared with the high strength DS grade and SS rail. The beneficial effect of head hardening is also evident. The yield strength increase between non-head hardened SS grade and DS is significant for similar nominal alloying strategies; the head hardening process also provides a benefit to the tensile ductility as shown by the increased reduction of area in tension. The G2HH grade exhibits an additional increase in yield strength compared with the high strength DS grade, which is also accompanied by a substantial increase in the tensile ductility.

Wear resistance testing was performed using a twin disc testing machine in rolling-sliding contact. Rail test specimens were machined from the head of the rail with a 39.5mm disc diameter and 3mm specimen width. The opposing discs were machined from rail material that approximates railway wheel steel. The material is fully pearlitic with a similar hardness and chemical composition to that of Class C wheels used in North America. The wheel sample was cylindrical with a diameter of 46.2mm.

A constant initial Hertzian contact pressure of 1300MPa was maintained. A constant slip ratio of 10% was maintained by controlling the rotational speed of the two disc samples. During the wear test, the sample mass was measured at specific cycle intervals. Triplicate tests were performed for each rail grade. This method has been shown to provide excellent characterisation of wear behaviour.

The modification of the alloy system and head hardening procedure used to produce G2HH results in a further reduction in the wear rate compared with DS.

As the consequences of derailments become increasingly dire, factors that govern railway safety become increasingly important. The fracture resistance of the rail material represents a last defence against rail breaks, because increases to the rail fracture toughness raise the flaw tolerance of the rail under a given load. The ability of the rail to tolerate larger flaws means it will take longer (more loading cycles) for flaws to reach a critical size and cause a rail fracture, while larger flaws are more likely to be detected by inspection vehicles.

Testing was performed in accordance with ASTM E399-17. The specimen featured a compact tension geometry, C(T), with a width of 38.1mm. Plane strain fracture toughness tests were performed on rail head and rail base samples for the G2HH and DS materials at 24°C, 0°C, and -40°C, and triplicate specimens were evaluated for each condition.

The Apex G2HH grade rail is being tested in numerous locations in North America including low radius curves in mountainous terrain as well as less severe environments. For example, the Apex G2HH grade rail was installed along with the DS grade rail in a 563.5m radius curve with a 1.1% gradient on a North American heavy-haul line. Both high and low rails were electric flash butt welded into 439m lengths, alternating between the two rail grades at 24.4m intervals. Rail profiles were measured periodically, including the total metal removal caused by passing trains and preventative and profile rail grinding. At the time of this report, the total accumulation of traffic was approximately 175 million gross tons (MGT) and the measurements were made at approximately 150MGT.

The DS and G2HH rail profile measurement data for the high and low rails demonstrate statistically significant differences between the two grades as verified by means of the two sample T-test with a p-value threshold of 0.05. The high rail gauge face (W2) and gauge corner (W3) values show reasonably high losses, while the low rail W2 and W3 position values were low enough to lack statistical significance, indicating that the curve remains in high rail flanging contact.

The revenue service test data show a distinct advantage of the G2HH rail over the DS rail.

Figure 4 shows the revenue service performance improvements of the G2HH grade relative to the DS grade. In all the measurement positions in which statistical significance could be established, the G2HH rail outperformed the DS rail.

Figure 5 shows representative photographs of the running surface of the low rail at 150MGT. The operator of the test curve elected to extend the interval between grinding cycles to evaluate the relative RCF resistance of the G2HH grade compared with the DS grade.

At the time of this evaluation the high rail showed no RCF damage. The low wear rate in the low rail, combined with a lack of preventative grinding due to the extended grinding interval, resulted in the initiation of RCF damage along the running surface of the DS rail. However, the G2HH rails showed no indication of RCF damage.

Greater strength and hardness are achieved without compromising safety performance metrics such as fracture toughness. The new rail grade is a significant milestone in rail development, providing simultaneous improvements to hardness and fracture toughness - the previous advance in technology to achieve this result was the head hardening process itself.