Adrian Bednarczyk, head of research and development at Vossloh Fastening Systems, profiles the company’s new polymer sleeper, which is composed of the composite material amalentic. 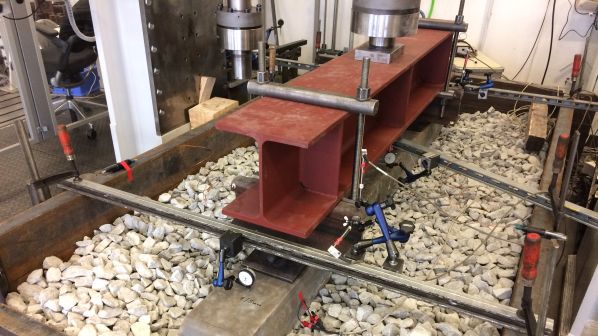 Dynamic fatigue tests were performed in a ballast trough at the Werdohl testing laboratory to test the endurance of the EPS. Photo: Vossloh

VOSSLOH has developed its Engineered Polymer Sleeper (EPS) with the objective of combining the positive properties of plastic and wooden sleepers in a new composite sleeper while avoiding the traditional drawbacks of these materials.

Plastic and wooden sleepers are now predominately used in turnouts and on bridges. For turnouts, the availability of varying sleeper lengths is a key consideration while for bridges, low weight and cost play a determining role in the sleeper type used.

Wooden sleepers have generally declined in popularity in Europe in recent years. The limited availability of hardwood as well as the potentially harmful effects of impregnating compounds on human health and the environment have reduced their attractiveness. Wooden sleepers can potentially emit fungicides or tar oil derivatives such as Wolmanit and/or creosote used to preserve the material into the natural environment. Disposal is also an issue.

In contrast, plastic sleepers, which have been available on the market for a number of years, are generally produced from 100%-recycled plastics. They often include steel reinforcement bars, fibre glass or resin sheathed bundles of glass fibres, and manufacturers typically offer an estimated life expectancy of more than 50 years.

Recycling of the material used in these sleepers, which have the advantage of not requiring maintenance, is also possible. However, since the recycled material used is not always of a uniform quality, infrastructure managers cannot discount possible variances in sleeper properties and performance.

As an alternative, high-quality plastic sleepers are available but their high-cost means that a large-scale installation is often not economically viable.

There are several other potential drawbacks of using plastic sleepers:

Despite these issues, in North America, the world’s largest market for wooden sleepers, demand for plastic alternatives is growing. This is particularly the case for special heavy-duty applications and for use in extreme environments.

When developing a sleeper that could meet this demand but overcome many of the drawbacks of existing solutions, Vossloh gave major consideration to the various technical requirements included in the standards and guidelines as well as individual customer requirements for potential applications.
In order to satisfy these requirements, comprehensive material selection trials were performed in a pilot project at the company’s facility in Werdohl, Germany. These tests helped to identify the optimum materials and material mix, including mixing ratio, grain size and geometry, as well as the appropriate manufacturing method for the new sleeper.

Based on the results of these studies, the tooling was modified and the first specimens were produced and tested in a three-point bend test.

In addition to the requirements of the established rules and regulations, Vossloh identified more than 140 additional test requirements required to comply with customer demands. Customer projects have increasingly shown that many limit values no longer adequately reflect the current loads. As a consequence, Vossloh performed internal and external material tests, including at Munich Technical University, to determine properties such as UV resistance and thermal conductivity, fire behaviour and absorption of water. The tests concerning the thermal expansion coefficient were carried out since a low coefficient indicates low expansion which in turn reduces gauge variations.

The sleepers were also subjected to drop tests, while three and four-point bend tests were conducted to identify lateral resistance and the negative bending moment (Figure 1). In addition, an intensive dynamic test in a ballast trough was performed to examine endurance and fatigue (photo).

During the dynamic test, inductive displacement transducers recorded rail and sleeper subsidence in the middle and at the ends of the sleeper. In addition, the strain on the top side of the sleeper in the sleeper middle was captured with strain gauges. The average measured values and the test conditions in the individual test phases are summarised in Table 1.

After a total of 7.7 million load cycles, no damage such as cracks, plastic deformation, or abrasion was observed on the sleeper. Also, the rail fastening and the ballast did not suffer any damage as a result of the continuous mechanical load.

Important considerations for the new sleeper during the development phase included securing a lower susceptibility to cracks, high electrical resistance and good suitability for machining.

Regarding weight, the engineers made a compromise in favour of offering a high resistance to lateral displacement, which is an important feature of concrete sleepers. With an average weight of 150kg, the standard EPS weighs about 50% more than a typical wood or plastic sleeper, but only half that of a standard concrete sleeper.

The design for the US market, which was realised as a first step, weighs 157kg and has a shape similar to a traditional wooden sleeper (Figure 2a). Innovative design variants are also possible that can significantly reduce the weight to 115kg (Figure 2b) while remaining fully compliant with all safety aspects and important customer requirements. The reduced stacking height (Figure 2c) improves transport and storage.

A number of possible fastening variants are available. For example, for W-systems with W-bead (Figure 2d), only a screw and tension clamp - and if necessary, a rail pad - are required for fastening the rail. The EPS also offers substantial cost benefits compared with a plastic sleeper with similar properties.

A US Class 1 railway has already received the EPS sleepers for a series of tests, which will monitor the sleeper’s performance while working under 36-tonne axleloads. Vossloh is also exploring the possibility of testing the sleepers in Germany.