MALAYSIA’s rail infrastructure development programme took a dramatic turn in May 2018 following the election of a new government committed to reducing the national debt. 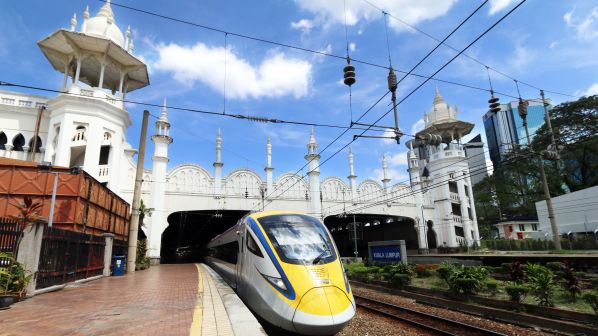 The administration acted almost immediately to block the Ringgits 60-70bn ($US 14.4-16.8bn) blue-ribbon Kuala Lumpur - Singapore high-speed project, condemning the cost and the limited benefits of the scheme.

However, with the project for the 350km line at the procurement phase, getting out of the legally-binding HSR Bilateral Agreement with Singapore proved difficult. By September, Malaysia and Singapore had agreed to suspend the scheme for five years. In return Malaysia will meet the costs of the suspension and agreed to bear Singapore’s costs of fulfilling the bilateral agreement if it decides not to proceed with construction by a deadline of May 31 2020. In the meantime, both governments are seeking to reduce the cost of the scheme.

The administration also looks set to abandon another flagship rail project of the previous government, the East Coast Rail Link (ECRL). Work was suspended in July and prime minister, Dr Mahathir Mohamad, confirmed on August 13 that he is seeking to cancel a contract for the construction of the Ringgits 55bn project, a year after his predecessor Mr Najib Razak launched civil works.

Mathathir says he wants the government to pull-out of Chinese-financed infrastructure projects, including ECRL, claiming the project was overpriced and economically unviable. However, discussions with the contractor, China Communication Construction Company, were still underway in November, with the Malaysian government stating that it was trying not to upset the Chinese firm.

Apad will continue Spad’s work to plan and develop projects, including metro, light rail, heavy rail and bus schemes, although the government has promised to streamline the body’s work and promote greater efficiency. Spad’s functions in enforcement and licensing will become the responsibility of the Road Transport Department.

While it is reviewing capital expenditure, the new government remains a proponent of urban public transport development as part of its economic development strategy which raises living standards and productivity. However, the administration is adamant that this should not come at any cost.

Kuala Lumpur has benefitted from a steady expansion of its urban rail network in recent years under the direction of public transport operator, Prasarana. However, this agency has also experienced major changes in 2018.

CEO Mr Azmi Abdul Aziz departed the company in January and was replaced by Ms Masnizam Hisham. But as the agency’s financial troubles became apparent, her tenure proved short-lived. She was replaced by Mr Hazlan Mohamed Hussain in September, who was issued with a mandate to enhance the level of service on offer and to ensure the company operates on a sustainable financial footing.

This appears far from straightforward. Prasarana is facing severe cash-flow problems - it reported a loss of Ringgits 2.5bn based on revenues of Ringgits 846m in 2017. Hisham said that cost-saving measures introduced during her tenure were expected to save the agency Ringgits 200m by the end of 2018. The operator is also looking to increase ridership and non-fare revenues while reducing the cost of capital projects underway, which have ballooned out of control.

This includes the embattled 36km LRT-3 light metro line from Damansara to Klang. Work came to a near standstill on the project in 2018 as costs rose to Ringgits 31.65bn in March 2018 from an initial projection of Ringgits 16bn.

The construction cost has been revised to Ringgits 16.6bn, including a a renegotiated Ringgits 11.86bn civil works contract with MRCB George Kent. This includes a contingency of Ringgits 400m, which if not used will reduce the value of the contract. The remaining Ringgits 4.8bn accounts for land acquisition, interest during construction and others. Prasarana will also scale back the train fleet and eliminate five stations. Completion of the project is now scheduled for February 2024, four years later than originally planned.

The operator came to a similar agreement for the 52.2km MRT-2 automated metro line from Sungai Buloh to Serdang and Putrajaya in October. Instead of acting as a project-delivery partner, MMC Gamuda is now a turnkey contractor for the 38.7km elevated portion of the project, which will be delivered under a Ringgits 17.42bn contract, construction of which began in September 2016. The agreement with the contractor for the 13.5km underground section between Jalan Ipoh and Kuchai Lama has been terminated, with the government set to retender all unfinished work through an international open tender. The move is expected to reduce the cost of the project by Ringgits 5.22bn, or 23%.

While Prasarana was targeting further expansion of the network following the conclusion of these projects, it remains to be seen whether the government, and Apad, will move ahead with the previously agreed timeline.

The country’s 2019 budget issued on November 2 indicates that tackling the national debt will dictate the direction of the economy. Indeed, the government is looking to shift away from policies that prioritise state investment to generate growth to private sector-led economic development and job creation.

After the excesses and controversies of the Razak regime, which have since unravelled in a wave of embezzlement and corruption allegations and charges, this is a welcome change in direction for many observers. However, it remains to be seen what it will mean in the long-term for the country’s rail sector.