Alstom says its new generation of high-speed trains - the single-deck Avelia Liberty for Amtrak and the double-deck Avelia Horizon for SNCF - will raise the bar for high-speed train design in terms of acquisition cost, maintenance, energy consumption and capacity. While these trains retain the hallmarks of SNCF’s iconic TGV, they are completely new designs, as David Briginshaw discovers. 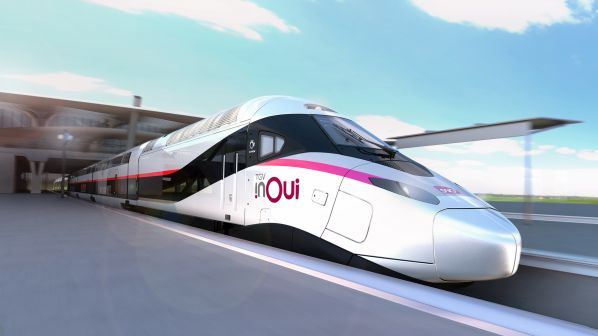 ALSTOM’s new range of Avelia high-speed trains got off to a flying start with orders for 28 single-deck Liberty tilting trains from Amtrak in 2016 worth $US 2bn, including long-term technical support and components, and 100 double-deck Horizon trains from French National Railways (SNCF) in July worth €2.7bn.

Production of the Amtrak fleet has already started, following the shipment of the first bodyshell from Alstom’s Savigliano plant in Italy to the United States, where assembly is currently underway at Alstom’s New York state plants in Hornell and Rochester. The first pre-series set will be delivered for trials in 2019 and the first production train is due to enter service on the Boston - New York - Washington DC Northeast Corridor in 2021, replacing the existing Acela trains supplied by Alstom and Bombardier in 2000. Two prototype Avelia Horizon trains will be ready for testing and certification in France in 2021 with delivery of the fleet running from 2023 to 2031. 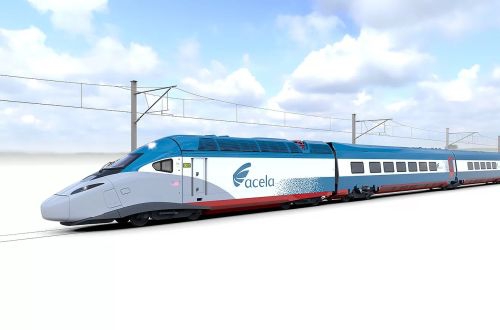 The new generation of Avelia trains trace their roots to the original concept for TGV, which dates from the late 1960s and early 1970s with the experimental gas-turbine TGV which had power cars and articulation. While the gas turbines were dropped in favour of electric traction following the 1973 oil crisis, all TGVs since then have had separate power cars and articulated coaches whether single or double-deck.

Both Alstom and SNCF are firm believers in articulation due to the stability and rigidity it delivers at very high speeds, reducing the risk of derailment and flying ballast. Articulation also reduces train weight as there are fewer bogies per train, while improving the ride quality and aerodynamics of the train.

TGV was originally developed by SNCF engineers in collaboration with the French rail industry, but the development of later generations of TGV has gradually shifted from the railway to the manufacturing sector, reflecting the trend in other countries. Avelia Horizon represents a move back towards greater involvement by the railway, with close cooperation between SNCF and Alstom.

SNCF was increasingly concerned about growing competition in the high-speed market from low-cost airlines, car sharing innovations, deregulation of long-distance bus operation, the possibility of rail competitors entering the market and the need to attract more people to rail. SNCF’s Ouigo high-speed rail initiative, which reduced operating costs and emulated the low-cost airline operating model, was an attempt to offer lower fares and thereby broaden the appeal of high-speed rail travel. This has been successful and showed what could be achieved if operating and maintenance costs could be cut across the board.

In 2015, SNCF launched an innovation partnership tender as part of its TGV2020 initiative. Alstom won the contract and started work with SNCF on the project in May 2016. A team of around 2000 people from the two organisations has been working on the project, and SNCF says this resulted in more than 1000 innovations and 50 potential patents.

Also in 2015, the French government launched its Future Investment Programme (PIA) for various industries, with the transport element led by Ademe, a government agency which funds sustainability projects. Ademe and Alstom formed a joint venture called Speedinnov to develop the new high-speed train. Alstom holds a majority share in Speedinnov. 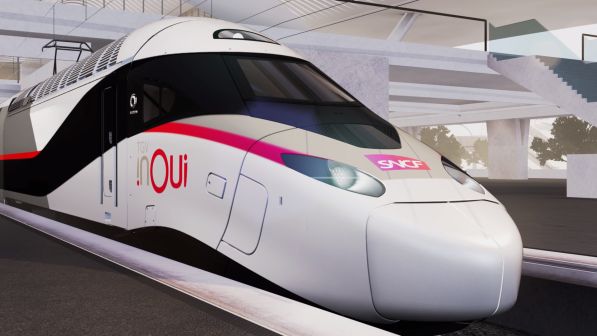 “We were selected in 2015 as a partner of SNCF to define the train and meet SNCF’s objectives to reduce acquisition cost, and energy and maintenance costs, while increasing capacity,” says Mr Jean-Marc Tessier, Alstom’s Avelia project director. “One of the criteria in the innovation partnership with SNCF was to design a double-deck train which could seat up to 740 passengers, which we have achieved.” By comparison, a TGV Duplex of the same length (200m) seats just over 500 passengers with first and second-class accommodation or 630 in a one-class Ouigo train without a buffet car.

“The contract was allowed by the European Commission provided we met SNCF’s criteria, and if we failed to meet them the project would be stopped,” Tessier continues. “The contract with SNCF was a milestone, and the Speedinnov joint venture will continue because this is the entity which own the intellectual property of the train.”

As Alstom was keen to reduce the cost of its high-speed train due to increasing competition in the market, its objectives were similar to those of SNCF except in one key respect. “We needed a train that could be exported easily, so we didn’t want a train which was only suitable for SNCF, and SNCF accepted this condition,” Tessier explains. “We worked together with SNCF to optimise the design and came up with the first version of Avelia Horizon. This led to a second version, which was more compliant with SNCF’s expectations.”

There were other reasons to start with a clean slate. “TGV Duplex was designed in the 1990s, and while we have modified the train over the years, we were starting to face obsolescence issues,” Tessier says. “Not one single car on TGV Duplex is the same, so achieving more standardisation was a key element. Redesigning the train from scratch would solve all the problems we have faced in the last 25 years.

“We have worked on modularity with the new train in order to have identical coaches, achieve flexibility, and be able to meet the needs of customers. For example, the new train will have adjustable seat pitch, which we don’t have now.”

Modularity will allow the seating layout to be altered to meet different comfort standards and requirements, as SNCF explains: “Operators can add luggage racks as desired or convert first-class compartments into second-class seating in just half a day.”

Tessier says modularity will enable Alstom to accommodate changes to the design of the train in the future and thereby retain its competitiveness.

“We have used a lot of our experience with locomotives to dramatically reduce the cost of the power cars,” Tessier reveals. “We have moved from having a lateral corridor within the power cars to a central corridor, and the traction equipment is a lot smaller and a lot quieter than in today’s power cars. The traction system for Avelia Horizon is much closer to what we have on our locomotives, which means it will perform better and be more efficient than on the trains we have today. We are using an evolution of power electronics and an IGBT traction system to ensure it is up-to-date. We already have permanent magnet motors on AGV, and investigated whether to use them on Avelia Horizon, but we decided in the end not to do so.”

SNCF says 97% of the materials used to manufacture the new trains will be recyclable, and use of more eco-friendly materials, means that its carbon footprint is 37% smaller than the current TGV Duplex trains.

The series-production Avelia Horizon trains will be manufactured in Alstom’s new Factory of the Future, which involves remodelling its La Rochelle plant. Tessier says work on the project will start soon, and the new factory should be fully operational within two-and-a-half years. “It will be a long process to switch from old to new production methods, with a lot of implications for retooling and staff training,” Tessier says. 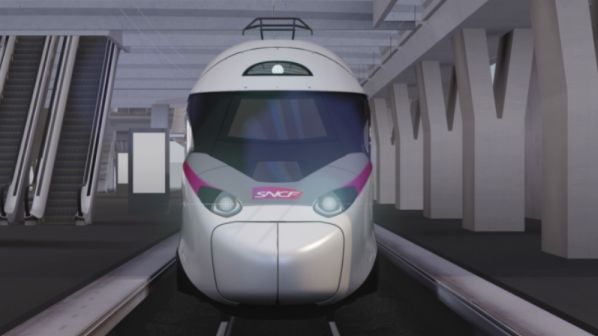 One of the major benefits of the Alstom-SNCF partnership was SNCF’s extensive knowledge of operating and maintaining a large fleet of high-speed trains, which spans nearly four decades. SNCF’s TGV fleet runs beyond the French border to Belgium, Luxembourg, Germany, Switzerland, Italy and Spain. SNCF is also a partner in Eurostar, whose original TGV-based trains operate between Britain, France and Belgium, as well Thalys, which operates multi-system TGVs in France, Belgium, the Netherlands and Germany.

Alstom has also built up its own maintenance knowledge through contracts to maintain Virgin’s Pendolino tilting train fleet in Britain, and Italo-NTV’s fleet of 25 AGVs - Alstom’s distributed-traction train which has a maximum operating speed of 300km/h and a design speed of 360km/h - as well as its growing fleet of Pendolinos.

Tessier says SNCF’s long-term experience was important to the success of the project. “SNCF has shared its operating and maintenance costs with us, so our predicted 30% maintenance cost reduction is not theoretical,” he says. “We have worked with SNCF over the last two years and looked at all the components to see how to anticipate failures and wear rates in order to optimise the maintenance plan.
As a result of SNCF sharing information with us, we have been able to propose solutions that will cut maintenance costs by a little more than 30%.” A remote fault diagnostics system will support predictive maintenance.

“We have less equipment inside the train and we have removed all the internal electrical equipment in the areas used by passengers, which has saved a lot space,” Tessier explains. This has enabled Alstom to increase the space dedicated to passengers by 20%.

SNCF says Avelia Horizon will be the first TGV offering full connectivity with services tailored to passenger needs. Wi-Fi, timetables and other information will be available in real time throughout the train, with online booking for select services. The network will be designed to keep pace with changing technology, so new services can be added as they emerge. “The first priority was to make connectivity available on all lines: now our focus has shifted to improving connection quality,” SNCF says.

“We have implemented solutions to improve connectivity, which is evolving quickly,” Tessier adds. “Two companies which we acquired recently - 21Net and Nomad Digital - are helping with this.”

The new trains will have windows which are 370mm longer in passenger seating areas, resulting in 10% more glass. A modular lighting system will adjust for arrivals and departures, and morning and evening light.

The air-conditioning has been redesigned to enable it to be controlled more accurately, and airflow has been redirected to move through ceiling vents instead of armrest-level openings. SNCF says work is still going on to reduce noise through better insulation.

SNCF says this is the first time that TGV designers have worked with wheelchair users throughout the design process. “The results go well beyond legal requirements,” SNCF says, “as these passengers can access seating and move around the train independently thanks to a rotating and lifting platform.” Toilets have also been totally redesigned.

SNCF invited bids for the interior design of the train and awarded a contract to a joint venture of SNCF subsidiary Arep DesignLab and Nendo, Japan. “The is the first time that SNCF has selected a French-international team to create interior spaces for its TGV trains,” SNCF says. “The last time such a project came along, SNCF developed the TGV Duplex in the early 1990s with Roger Talon.”

“The challenge facing the SNCF-Alstom team was to design a TGV that would cost €25m, compared with €30m for a TGV Duplex, plus €1.66m per train for options that improve both profitability and on-board comfort,” SNCF says. Both Alstom and SNCF say the objective was accomplished and a 200m-long Avelia Horizon will cost 20% less than a 200m TGV Duplex.

“We reached our original targets for Avelia Horizon, there was no way to escape from that,” Tessier says. “Thanks to our work with SNCF, we have been able to improve the final result and offer something better in terms of the passenger experience than we thought we could achieve initially.”