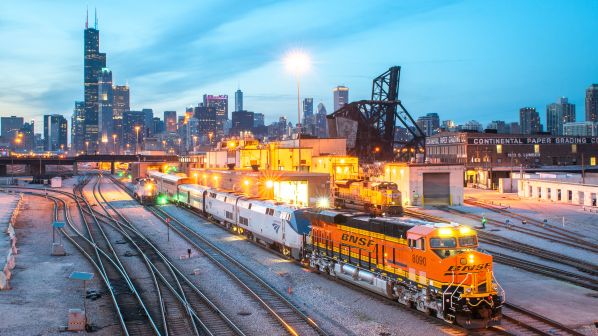 Major work is underway in Chicago to deliver infrastructure fit for today and growing traffic in the future.

HOW do you solve a problem like Chicago? The epicentre of the US continental network, where six Class 1 networks meet and 390,000 passengers use Metra and Amtrak services every weekday, the Windy City’s rail infrastructure is notorious for delays and bottlenecks.

Major work is underway to deliver infrastructure fit for today and growing traffic in the future. The Chicago Planning Group (CPG), led by the Association of American Railroads’ (AAR) Safety and Operations Management Committee, is currently implementing a series of updates, and delegates at Arema’s annual conference at Railway Interchange on September 25 were offered an insight of progress so far.

The Chicago Regional Environmental and Transportation Efficiency (Create) programme, which began as long ago as 2003, is CIP’s primary infrastructure improvement initiative.

Create is a partnership between the US Department of Transportation, the State of Illinois, Cook County, the City of Chicago, Metra, Amtrak and the freight railways. Worth more than $US 4.4bn, the initiative encompasses more than 70 projects focused on four key corridors: the Beltway Corridor, a connection between western and eastern railways via the Indiana Harbor Belt (IHB) railway, which is used by significant bulk and manifest traffic; the Western Avenue Corridor another east-west connection used primarily for intermodal; the Passenger Corridor, which separates passenger from freight trains; and a new east-west corridor via 75th Street.

So far more than $US 1.4bn of public-private funds have been spent with the railways contributing 25% of this cost. 29 Create projects are complete and in service, with five in construction, four in the design stage, and 13 in environmental review. These projects will eliminate 25 level crossings, and separate passenger and freight trains at six locations. 19 projects are currently awaiting funding while an additional 36 freight projects are envisaged to upgrade track switches and signalling as well as improve viaducts and level crossings.

Highlights of the delivered projects include new power-operated switches and a traffic control system on the Norfolk Southern (NS)-owned tracks from Ashland Avenue Yard and 22nd Street to CP518, adjacent to South Stewart Avenue as well as a new passing loop at the yard. Bidirectional operation reduced the time to traverse the segment from up to an hour to around 10 minutes.

Similarly, the Englewood flyover project on the Passenger Corridor, which removes conflicts between 46 freight trains, 78 Metra Rock Island trains and 14 Amtrak trains, was completed in May 2016.

Work was also recently completed on a new link from the BNSF line between Western Avenue and Ashbury on the Western Corridor, and a new connecting track between BNSF’s Chicago and Chilicothe subdivisions. This is enabling 22 trains to run between the Cicero and Corweth yards and eliminates issues with long reverse manoeuvres.

Other key work has focused on improving operations management. The 10 railways active in Chicago all possessed their own siloed communications networks. Manual collection of operating plans meant that access to a full operating plan and an analysis of route causes was near to impossible because of the lack of data.

The solution developed by Railinc, a wholly-owned for-profit subsidiary of AAR, combines each of the 10 railway’s operating data and provides the foundation for the Chicago Integrated Operations Centre (CIROC).

Clear Path integrates operations information for each railway into a single interface, which is updated automatically, giving planners a clear view of all trains arriving, departing and crossing. Planners can see how each railway’s plan interacts, and coordinate and negotiate adjustments to make better use of available resources. For example, by identifying trains delayed on route, connecting crews can be positioned at the correct time.

Updates to Clear Path include merging the schematic view of train infrastructure status developed in the first stage of the project with Clear Path’s geography application, which offers the status of tracks in use as well as data on switches and signals for the entire Chicago terminal complex. This will link planning and monitoring into a single application, helping CIROC staff to identify and record the root cause of train delays and to pinpoint systemic problem areas helping to maintain fluidity of movements through Chicago.

To realise the full benefits of Clear Path and CIROC, the remaining 19 Create projects need to be completed.

The largest of these is the 75th Street Upgrade project, or SIP, which will address the bottleneck at Belt Junction, the confluence of Belt Railway of Chicago (BRC), CSX, NS and UP lines, which handles over 90 freight trains per day and intersects with 30 daily Metra trains. The project will involve reconfiguring BRC main line tracks, adding a third track and constructing a flyover where currently four freight railways and Metra conflict at a flat junction.