Britain’s infrastructure manager Network Rail is putting more emphasis on the needs of customers following the appointment last year of Andrew Haines as its new CEO. Haines outlined some of his priorities for NR during the recent Acclerate Rail conference in London. David Briginshaw was in the audience. 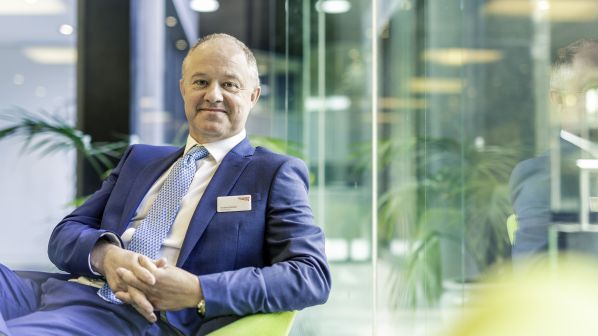 Our biggest problem is contractualisation. Everything is so tied down it is difficult to achieve change. Andrew Haines

ANDREW Haines joined Network Rail (NR) from Britain’s Civil Aviation Authority, where he had been chief executive for nine years, shortly after the May 2018 timetable meltdown which was partly caused by NR’s failure to complete electrification northwest of Manchester on time. NR’s Great Western Main Line electrification programme is also running late and massively over budget, while punctuality across the network has deteriorated.

In addition, NR’s new five-year investment programme, Control Period 6 (CP6), started on April 1 following on from CP5 which had run over budget and schedule, leading to some projects being scaled back or postponed.

At the same time, a government-sponsored review of the structure of Britain’s rail industry is underway led by former British Airways chief executive, Mr Keith Williams. The review aims for a more effective balance between the public and private sectors, examining all parts of the rail industry to reduce fragmentation, improve passenger services and increase accountability, obtaining better value for money for passengers and taxpayers and improving industrial relations. The review will be completed in the autumn and the government says it plans to make reforms from 2020 onwards.

“We don’t need to wait for the rail review to make changes,” Haines told delegates attending the Accelerate Rail conference in London on March 19. He has already identified some of the organisation’s failings and what needs to be done to correct them.

“A system which operates reliably creates capacity, but we are not currently achieving that,” Haines said. “I have met around 1000 people so far, and we have lost sight of why we exist. Too many people are distracted by other things and we are not foreseeing problems.

“We have let slip our core competency, and we appear paralyzed and unable to do anything, while we wait for someone to tell us what to do. We need to be an organisation which puts passengers first and that people want to work for.”

Haines listed three initiatives designed to get NR back on track:

“We need to imagine a passenger is sitting in on our meetings,” Haines explained. “The outcome of our meetings would be very different if we put passengers first. The curse of being a monopoly is that we lose close proximity to our customers, but there are not many businesses that thrive or flourish without paying attention to their customers.”

Haines says simply changing NR is not going to be sufficient to improve the performance of the national rail network. “We must align the whole industry on goals,” he told delegates. “There is too much conflict regarding timescales and incentives. We must rebuild trust in the industry, and we need to work together to build a platform for continuous growth.

“Our biggest problem is contractualisation. Everything is so tied down it is difficult to achieve change even though we are working in a very fluid environment. We have made things so complicated that it inhibits innovation.”

Even though NR has just been restructured to devolve more responsibility away from headquarters, Haines says: “we will not be precious about the structure of NR - the focus must be on the service we offer.

“My aim is to get rid of central controls. We need to take away some of the artificial separation. We need to take decisions as a network, but without telling people what to do from the centre.”

Haines thinks that NR should not necessarily be the only game in town. “If other people can do things more efficiently than NR that is good,” Haines said. “The risk for the railway is that we fail to meet growth in demand.”

Haines also says he is willing to consider new methods of working and implementing projects. He pointed to the alliance approach which NR already takes for track upgrading projects. NR is a member of the East West Rail Alliance, which is designing and delivering Phase 2 of East West Rail to reopen the railway between Bicester and Bletchley and upgrading the line from there to Bedford. “We want to look at our contracting strategy over the next couple of years,” he revealed.

While the government decided to scale back existing electrification programmes and postpone planned schemes following the cost overruns on Great Western and other projects, Haines gave some hope that lessons have been learnt and changes made. “Electrification is not dead, but it is not a panacea either,” he said. “We have brought down the cost of electrification significantly.

If we were doing Great Western again, I don’t think anyone would do it the same way. But should we use battery-powered trains for stub-ends of the network like the Uckfield branch rather than electrification?”

Haines also believes there is too much intervention in the industry from politicians and civil servants. “When you are spending tens of billions of public money on the railway you can expect some scrutiny and there are definitely areas where we can improve,” he told delegates. But whether the government can ever relax its grip on Britain’s railway remains to be seen.