A new start for Dubai’s metro and light rail network 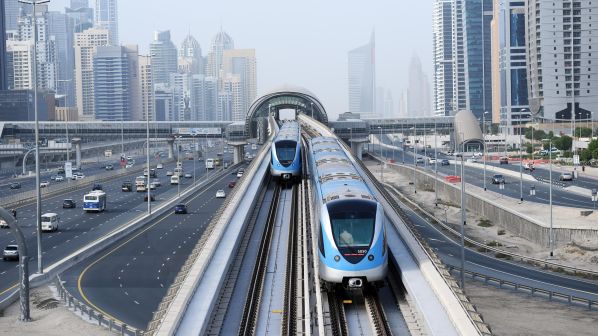 Keolis-MHI is now responsible for operating and maintaining the largest entirely driverless metro network in the world.

DUBAI’s public transport network embarked on a new era on September 8. Serco, which had operated and maintained the driverless metro since it opened in 2009, overseeing steady expansion, along with the 10.6km light rail network, which opened in 2014, stepped aside in favour of a new operating joint venture of Keolis, Mitsubishi Heavy Industries (MHI) and Mitsubishi Corporation.

The new nine-year agreement awarded by Dubai’s Roads & Transport Authority (RTA) includes two options for three-year extensions. Its commencement follows a seven-month transition period that ensued after the award of the contract on January 31.

Keolis-MHI is now responsible for operating and maintaining the Dubai Metro Red (52.1km) and Green (22.5km) lines, which together have 53 stations, and is the largest entirely driverless metro network in the world. The light rail network deploys Alstom’s APS ground power supply system and is also the world’s first entirely catenary free network. The 11 Alstom Citadis LRVs serve 11 stations, interchanging with two metro stations at Dubai Marina and Jumeirah Lake Towers. Together the networks carried 20 million passengers per year before the Covid-19 pandemic.

Keolis-MHI will operate and maintain all metro and tram network assets, from trains and control centres to stations and associated infrastructure. The contract also covers the operation of the fare collection systems, including sale and recharging of Nol smartcards, and full coordination and integration of Dubai’s metro, tram and other means of transport. The service must meet the highest standards of security and safety for passengers, while demanding performance indicators have been set for operation and punctuality.

Keolis has a 70% share in the joint venture and both Mitsubishi companies the remaining 30%. Ms Marie-Ange Debon, Keolis CEO, who was speaking exclusively to IRJ ahead of the start of the contract, says the joint venture overcame four other rival consortia to win the contract, which she says is testament to both the price and the quality of the offer.

“It is probably one of the most emblematic contracts in the world because of the importance of the network,” Debon says. “It is also a key reference to reinforce our position as a leader in automatic metros and light rail.

“RTA has the highest standards in the industry and a strong reputation for innovation, excellence and efficiency. We will work in close partnership with them to ensure we meet their expectations, enhance passenger experience and move towards smarter, more sustainable transport.”

Work on building up the necessary expertise in Dubai began shortly after the contract was awarded. Debon says the team consists of a mix of Keolis and MHI employees as well as around 1850 people it has recruited in Dubai, mostly from the previous Serco-led team, who have transferred to the new operator. The director of Keolis’ industrial division, Mr Pierre Gosset, and Mr Thierry Guinard, director for safety, security and well-being, supported the evolution of the bid team to the transition team along with experts in HR and communications. The joint venture also consulted closely with RTA on the best direction to take.

Crucially, Debon says a multi-cultural team has emerged in Dubai. As well as France, Keolis leant on people working across its public transport activities from around the world, including some who Debon describes as the company’s “best experts” from Britain, the United States, and India who have implemented best practice from their respective operations.

“English is the working language, which helps us unite people with very different origins, experiences and backgrounds.”

Debon says Dubai is the perfect environment to take this global approach because it is a truly international city. While in Germany, the Netherlands or China it is essential to use the local language, this is not necessary in the UAE.
“In Dubai we have assembled a truly global team,” Debon says. “English is the working language, which helps us unite people with very different origins, experiences and backgrounds. This diversity is reflective of our passengers and strengthens our work in Dubai and more generally in the Emirates.”

One area where the Keolis-MHI offers a break from the Serco era is that unlike the British company, Keolis is a specialist public transport company. Debon says this offers the joint venture an advantage in that it has good knowledge of user experience and what makes a successful operation, which will be essential for the company to meet its performance-related targets. “We look through the passengers’ eyes in terms of the information and digital services we provide, in order to offer the most seamless journey possible,” she says.

Debon adds that Keolis also has extensive experience with many of the technologies in use in Dubai: it helped launched the first automatic metro network in Lille in the 1980s, and has experience of Alstom’s APS system from Bordeaux, the pioneer of the technology, as well as Alstom’s Citadis LRVs and 50 five-car Metropolis metro trains. These were delivered between November 2018 and the second quarter of 2020, to supplement the launch fleet of 79 five-car trains supplied by Kinki Sharyo. MHI, as a system integrator, supported construction of the metro project meaning that it has an excellent grasp of the technologies in play, according to Debon.

“We know everything about public transport, it’s our job,” she says. “This is one of the unique aspects of the sector. Our people are really passionate and committed to serve the common good.”

The Keolis-MHI contract is worth approximately €125m per year. However, with quite strict performance-related targets on punctuality and reliability, and availability of assets, and with RTA set to regularly audit its performance, Debon admits that the operator will have to work hard to deliver.

A major element of this is making sure everything is working - platform screen doors at stations are all active, escalators are working as they should. Debon favours “proximity management,” whereby strong managers located close to the action can act decisively when things to go wrong in order to rectify any problem as quickly as possible.

In addition, Debon says Keolis-MHI will implement ISO certification to enhance the quality of service, particularly maintenance. Work is underway to secure ISO 55001 certification to facilitate a smart asset maintenance strategy, similar to what Keolis has already done in Australia, including the adoption of a predictive rather than reactive maintenance regime.

The internet of things (IoT) and Artificial Intelligence (AI) are mentioned by Debon as potentially facilitating such a transition. RTA says an asset monitoring system harnessing IoT and AI is already in place on the Red Line and is part of the plan to shift to predictive maintenance. However, Debon says the operator will wait to see what the optimal strategy is once it has settled into operating the contract.

“They already have some IT tools and we will complement these tools with others that we have developed and used in other countries,” Debon says.

The joint venture’s contract does not include exposure to risk based on ridership. Indeed, the network is still recovering from the effects of the Covid-19 pandemic. While demand remains high during peak periods, it is noticeably down off peak. However, this situation could change this month with the opening of the delayed Expo 2020, which will run until March 31 2022.

A new 15km extension to the Red Line provides a direct connection to the Expo site. The initial 4.4km section of the line from Jabal Ali to Al Furjan was inaugurated in July 2020 and began regular operation on January 1 using 15 of the Alstom trains. A 9km extension from Al Furjan to the Expo 2020 site opened on June 1.

Other planned extensions include the 3.4km Metro Route 2020 extension of the Red Line from Expo 2020 to Al Maktoum International Airport. Already 830m of this route has been built as part of the Expo 2020 project and it is earmarked to continue once construction gets underway on the new western terminal at the airport. The $US 39bn megaproject will transform the existing airport which is served by a handful of passenger and freight carriers into the world’s largest, serving an estimated 160 million passengers and 12 million tonnes of freight per year. It is part of the larger 140km2 multiphase development of six clustered zones. However, construction is currently on hold with a provisional completion date of 2030.

“RTA has the highest standards in the industry and a strong reputation for innovation, excellence and efficiency.”

The project is part of RTA’s Integrated Rail Masterplan for Dubai, which is intended to serve the expected increase in population up to 2040. Other projects included are the 21km extension of the Green Line from Creek via Al Knor to Dubai Academic City and an 8km extension of the Red Line from Centrepoint to International City.

Additional schemes that were delayed in the mid-2010s due to the oil crisis and are now set to come to fruition after 2030 include the 47km Blue Line, which will connect Dubai International Airport with Al Maktoum via Mohamed Bin Zayed Road; and the 49km Purple Line, between Muhaisnah and Al Maktoum. The Gold Line from Dubai Marina to Arabian Ranches and Deira, and the east-west Pink Line from City of Arabia to Al Sufouh have also been pushed back to this new date.

Expansion of the light rail network is also foreseen. RTA says it is currently evaluating the potential for such a project and possible technologies with the masterplan outlining a proposed 8km extension to serve developments in the Al Sofouh area, Madinat Jumeirah, Burj Al Arab and Mall of the Emirates.

More immediate plans include reducing headways to boost capacity on the metro network. This is favoured over infrastructure improvements and running longer trains. Certainly, the steady increase in patronage since the network opened in 2009 has emphasised the importance of the network to the Emirate. Keolis-MHI are now primed to maintain and improve its level of performance over the coming years.