Egyptian National Railways (ENR) has ambitious plans to boost rail freight volumes through a major restructuring of this element of the business, as Kevin Smith explains. 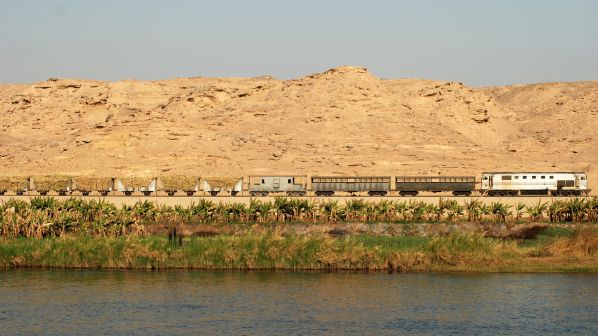 EGYPTIAN National Railways’ (ENR) €1bn order with Transmashholding-Hungary for 1300 passenger coaches in September 2018 was another landmark in recent efforts to restore the country’s ailing railway network.

The contract was the largest deal in ENR’s history and followed hot on the heels of a memorandum of understanding signed with Progress Rail to supply 50 new locomotives. The railway agreed a similar $US 575m deal with GE Transportation in June 2017 for 100 GE ES30ACi Light Evolution Series locomotives for use on passenger and freight services. Both agreements include 15-years of spare part supply and technical support as well as work to modernise, overhaul and maintain a portion of the railway’s existing fleet.

Long-distance passenger services are also set to benefit from new rolling stock as well as a series of infrastructure improvements that will boost line capacity.

ENR awarded Talgo a €158m contract to supply six 160km/h inter-city trains for the 1087km Alexandria - Cairo - Aswan corridor in April 2019. Thales is also delivering several contracts to upgrade signalling on the north-south line, including the 153km section from Alexandria to Benha, the 45km Benha - Cairo stretch, and the 165km section from Asyut to Nagh Hammadi.

The flurry of recent supply contracts, some of which were supported by the European Bank for Reconstruction and Development, falls under the guise of the Egypt National Railways Restructuring Project. This strategy aims to improve the reliability, efficiency and safety of the railway, which has suffered a string of fatal accidents in recent years.

Egypt was awarded $US 270m and $US 330m loans from the World Bank in 2009 and 2010 to support delivery of the plan, which covers signalling upgrades, track improvements and management reform. However, the political turmoil that followed the Arab Spring in 2011 meant progress was slow.

In an Implementation Status & Results report published on December 30 2018, the World Bank notes that progress with project implementation has been “moderately unsatisfactory” with the achievement of project development objectives rated as “moderately satisfactory.” The project was also rated as a “significant” risk.

The Bank reports that disbursements had reached $US 229m, or 38% of the expected total, by the end of 2018, with $US 95.6m due to be spent in the first six months of 2019. It says that signalling work is 53% complete on the Cairo - Alexandria line and 42% complete on the 251km Beni Suef - Asyut section. Work also recently commenced between Asyut and Nagh Hammadi. Track improvements worth $US 106m have been completed on a 200km section of the 879km Cairo - Aswan line, while ENR is also making good progress with modernising management and operating practices.

Overall, the Bank anticipates completion of the work by the end of December 2020, five years later than planned.

While much of the emphasis up to now has been on improving infrastructure and passenger rolling stock, ENR is not ignoring freight. Indeed, the railway has set a target for the network to carry around 25 million tonnes of freight annually by 2022, or 5% of total freight carried in Egypt, up from 4.6 million tonnes carried in 2017-18, and more than double the 12 million tonnes transported in 2000-01.

The government sees development of the railway as key to accessing the country’s abundance of natural resources and boosting the overall economy. To deliver this objective, and with support from EBRD, ENR has assigned Dornier Consulting International to develop a strategy that will transform the current rail freight operation. The result is a change in the law to enable ENR to partner with a private company to develop the freight business.


The challenges of delivering this project and meeting the traffic target are significant.

With guaranteed managerial independence, the new company will have a commercial relationship with ENR, principally regarding the use of infrastructure. Dornier is working to identify the legislative steps required to create the new company and according to Mr Essam Selim, consultant at Dornier, the process is split into two phases.

The first will establish the framework in which the new company will operate, including the track access regime and charges, the legal framework, the business strategy, and outline the governance and organisational structure. The second phase will formally establish the company. It is expected that the first phase will be implemented within six months and the second in nine months, which will include supporting the new company on a shadow basis while completing a detailed strategy and three-year business plan.

The challenges of delivering this project and meeting the traffic target are significant.

ENR’s freight business currently has a fleet of 217 locomotives of which just 90 are operational, and 2000 operational wagons although the majority of these are not fitted with adequate braking equipment. The average haul is 340km and the average revenue is just £E 0.15 net tonne-km.

“The freight sector as per the most recent reform of ENR in 2006 is supposed to act as a profitable business unit,” Selim says. “Unfortunately, this has not been realised. The freight business suffers from rolling stock shortages, no track access charges, no dedicated assets and the dominance of passenger operation where there is a higher priority to acquire locomotives and rolling stock and to operate trains.”

Currently, rail freight traffic is concentrated in liquid and dry general loose freight and raw materials, the value of which is low compared with commodities such as fertiliser, sugar and cement. The sector’s situation is compounded by the lack of an advertised timetable for the operation of rail freight services, making it difficult to provide a reliable schedule for prospective customers. There is also a lack of quality management at freight facilities and on the infrastructure side to offer an adequate level of customer service.

The hope for the new subsidiary is to foster relationships with the private sector to improve this situation. A pilot currently underway might provide a framework for how this might work.

ENR is working with 3A International to transport containers from the port of Alexandria to a terminal at 6th of October City, on the outskirts of Cairo. The model has been established on a negotiation basis to enable the private company to rent land from ENR for development and provide the necessary equipment to transfer containers between trains and trucks to offer a door-to-door service. The same contractor is repeating this model at a Robeiki, close to an industrial area in 10th of Ramadan City.

“It is a pilot project and ENR is willing to repeat this with other private sector partners in other locations,” Selim says. “The new company will be in a better position financially and institutionally to modify or enhance the current business model to make it more attractive to the private sector to participate, and more cost-effective for rail freight to acquire more market share.”

Overall, the government hopes to develop nine terminals in the Nile Delta Region and six south of the Valley with a potential investment of $US 1.25bn.

The lack of serviceable locomotives and rolling stock is hindering further development. But with the agreement with Progress Rail already in place, ENR is also planning to purchase up to 250 locomotives and 800 wagons. A contract for 140 wagons has already been awarded and another tender is underway for a further 160.

There are also plans to improve infrastructure to benefit rail freight services with eight projects of varying degrees identified and at different stages of development.

Ultimately with these improvements in place and work on the main lines complete, the freight operator will look to ramp up its market share. Specifically, the company is targeting:

As well as infrastructure improvements, the new company will introduce upgraded marketing strategies to attract new customers with Selim envisaging the adoption of digitalised tracking services for freight.

He is also optimistic that government regulation can prompt the shift of freight from road to rail. For example, legislation to freeze fossil fuel prices and eventually remove government subsidies is underway. “The government’s international commitment to reduce CO₂ and greenhouse gas emission is also likely to encourage the government to offer incentives for rail transport and restrict road transport,” Selim says.

Momentum is certainly building to revive the rail freight sector in Egypt. The presence of a high-profile delegation, including deputy minister for rail to highlight the freight strategy at the recent Middle East Rail conference in Dubai reflects the government’s backing for the plan. And while the target for volumes looks ambitious at this stage, with infrastructure and rolling stock improvements on the horizon, volumes look likely to be on the rise very soon.

Among the proposed projects that will improve accessibility to and from the 6th October City development and reduce conflicts with passenger trains is the completion of upgrades on the 35km line from Kilometre 66.7 on the Kafr Dawud - Sadat City line to Elmenashi/ Etai Elbaroud.

Another critical project that will increase volumes by a further 2 million tonnes per year is a scheme to connect East Port Said and the Suez Canal economic zone with the railway network. Work is underway to complete the technical specifications for the construction of a bridge over the Suez Canal which will connect with the existing Al Firdan bridges. Once complete, the Engineering Authority of the Armed Forces is set to offer a tender for the project which will also include rehabilitation of the line from Al Firdan, north of Ismailia, to Bir Al Abd. The contract is expected to be worth $US 140m with work taking two years from the proposed start date of 2020.

One of the largest projects is the rehabilitation of the west-east Abu Tartour - Qena - Safaga line in southern Egypt, which is part of a $US 1.4bn PPP scheme to develop a phosphate fertiliser production complex in Abu Tartour. Bids were received in October from three contractors with a winner expected to be announced last month. The railway element is worth around $US 400m and is due to be completed in October 2021.

A major rehabilitation project is proposed for the 60km El Mansoura - Damietta line, which will improve connectivity with Cairo and boost volumes by a further 2.5 million tonnes. The $US 210m project is split into railway engineering ($US 90m) and signalling ($US 120m) improvements. Systra has conducted consultancy work on the engineering element while TPF Getinsa Euroestudios has provided services for the signalling work. Work on the project is expected to take three years with progress expected in 2020.

Damietta is also set to benefit from the construction of a 11km non-electrified line to Kalr Elbateikh, including a 7km link to the Damietta industrial area. Design of the project is complete and a consultancy contract will be offered to determine demand on the route.

Improvements are also proposed for the 60km Suez - Adibyah - Sokna line with work underway to develop a feasibility plan to boost capacity through signalling enhancements.