New traction system at the heart of N700S

JR Central’s next-generation N700S high-speed train, which has been developed for operation on the Tokaido Shinkansen, pioneers a traction system which is the first in the world to use silicon carbide (SiC) devices, as Kenji Sato, Hirokazu Kato and Takafumi Fukushima from JR Central explain. 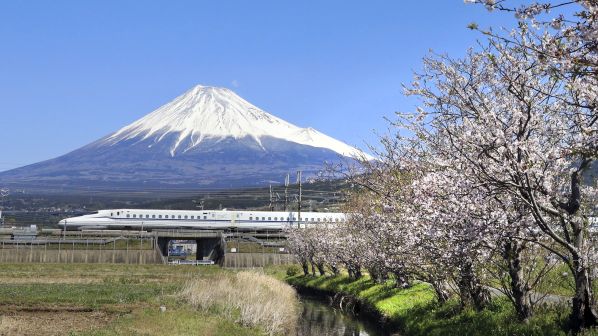 CENTRAL Japan Railway (JR Central) is currently testing the first of its next-generation N700S - the S stands for Supreme - Tokaido Shinkansen trains featuring an innovative traction system using silicon carbide (SiC) devices which is a world first. The N700S also has a lithium-ion battery self-propulsion system, which enables the train to operate catenary-free at low speed in the event of an earthquake or power outage.

The key concept for the N700S was to take advantage of the merits of SiC devices, which have a lower power loss, higher frequency and a higher current than Si devices, not only in the power convertor system but also in the entire traction system. A preliminary study revealed that the best way to make the most of the SiC device was to combine the convertor system with a blower-less cooling system and six-pole induction motors.

The cooling fins in a blower-less cooling system weigh more than those in a conventional forced air ventilation system. By applying SiC devices to a convertor with a blower-less cooling system the cooling fins can be made smaller due to a 30% reduction in switching losses. The higher current capacity enables the use of six-pole induction motors instead of conventional four-pole induction motors. This results in a weight reduction of nearly 20% because increasing the number of poles reduces the volume of the primary cores.

The convertor system of the Shinkansen train consists of a pulse-width-modulator (PWM) converter and a PWM inverter. In a study, we tried to apply SiC devices to both the converter and the inverter. We also considered the application of two types of SiC devices:

We studied two types of convertor systems using both the hybrid-SiC and the full-SiC devices.

Simulation based on running tests yielded a reduction of approximately 30% in total device energy loss per phase for the new convertor system. This information enabled us to determine the size of fins and the positions of the devices on the fins to avoid heat spots. As a result, it was possible to streamline the cooling fins themselves as well as the power unit including cooling the fins, components and switching drive circuits. The research culminated in the decision to adopt both the hybrid-SiC and the full-SiC devices for different applications, depending on the extent of the expected and prospective weight reduction and compactness.

We created a concept for developing the six-pole traction motor driven by the SiC convertor system. The SiC convertor system can supply a higher current making it possible to increase the number of poles from four to six. This enables the volume of the core to be reduced, while maintaining the same magnetic flux density. The six-pole traction motor also reduces overhangs of the primary coils, leading to a 10% reduction in axial length.

We also developed a novel structure for the secondary core or rotor based on magnetic field analysis. The secondary cores of conventional traction motors on Shinkansen trains have round holes for cooling because the traction motors are more powerful for high-speed running. While the core around the rotor bars contributes to the magnetic circuit, the core surrounding the axis, where the magnetic fields do not penetrate, can be reduced. Magnetic field simulations were conducted to reach a spoke shape as an optimised secondary core instead of the conventional shape with round holes. Thanks to the higher current capacity of the SiC convertor system, the motor characteristics were changed from magnetic to electric loaded. The weight-to-power ratio of the six-pole motor for N700S is 20% less than on series 300, 700, N700 and N700A trains, which have conventional four-pole motors.

Running tests were conducted with the SiC traction system (convertor systems and six-pole traction motors) installed on the N700S prototype train. The estimated junction temperatures of a Hybrid-SiC device were measured in running tests over the 515km between Tokyo and Shin-Osaka, including the temperature rise of the stator coil and rotor bar of the six-pole traction motors. The test results agreed with what had been expected during design and confirmed that the results were sound.

The weight reduction and downsizing effects are shown in Figure 1. The width of the convertor system for N700S is half that of the conventional system used in the series N700. The axial length of the six-pole traction motor for N700S is reduced by 10%.

The weight of the main transformer is also reduced by applying a newly developed cooling system rather than SiC applications. As a result, the N700S traction system weighs 20% less than the series N700 traction system.

During inspections or overhaul, the convertor systems are removed from the car body to repair the box frame and waterproof seal and inspect the protection functions of the controller.

To reduce maintenance costs, stainless steel was adopted for the convertor system box frame instead of aluminium. A self-diagnosis test circuit was also developed and implemented on a circuit board in the controller. Self-diagnosis tests by the new test circuit can replace tests using dedicated testing devices during general inspections.

These innovations eliminated the need to remove both the convertor system and its controller during inspections, which reduced the amount of work and time needed to carry out inspections.

We developed a novel lithium-ion battery traction system to power the train at low speed in an emergency such as a catenary power failure or earthquake. The system is installed in the space released by adopting the compact lightweight traction system. The system was successfully tested at low speeds using the N700S prototype train in September 2018 and is installed in the series-production N700S trains.

The innovative traction system installed in the N700S next-generation Tokaido Shinkansen train will enter commercial service next year. We hope these developments will pave the way for the application of SiC traction systems and lithium-ion batteries in trains both at home and abroad.