Germany’s railways face an uncertain future in 2023. On one hand new lines and new technology will modernise operations, but the lingering impacts of the Covid-19 pandemic, inflation and the war in Ukraine present uncertainties, as regional editor Keith Fender explains. 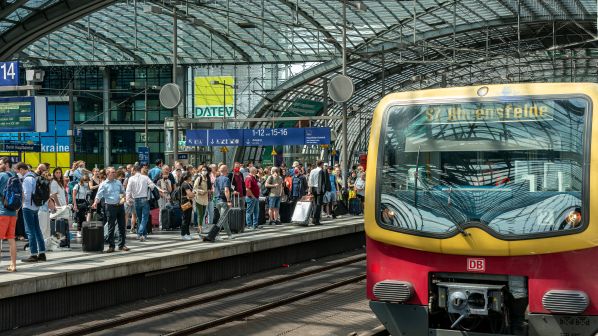 The German government has announced it will introduce a new €49 national monthly Deutschlandticket.

WITH the opening of the Wendlingen - Ulm high speed line on December 11 the German rail network grew by 60km, with journey times for ICE services between Stuttgart and Ulm reduced by around 15 minutes. DB Long Distance also introduced the first of 73 new Siemens Velaro Neo class 408 ICE high-speed trains in late 2022.

A shortage of train drivers and other staff in Germany prior to the pandemic, has become more widespread in the past three years. The lingering impact of Covid-19 and Germany’s comparatively restrictive policies for testing and isolation meant that in late 2022 staff shortages due to sickness were leading to widescale passenger train cancellations and delays.

The early weeks of the war in Ukraine directly impacted Germany’s railways, which carried hundreds of thousands of refugees as well as consignments of aid. The conflict continues to overshadow the wider economy, impacting rail freight in particular.

The need to rapidly reduce dependence on Russian natural gas led to commodities such as oil and coal being given legal priority on the German rail network in 2022. German Rail (DB) has committed to assisting Ukraine rebuild its railway after the war, although it is still unclear when that will be.

During 2023 the northern German state of Schleswig-Holstein will introduce Europe’s largest fleet of battery-powered trains.

Unlike previous battery technology, which relied on heavy lead acid batteries with limited range, the new Stadler Flirt Akku BEMUs feature lithium-based batteries which are lighter and can store energy from both regenerative braking and overhead catenary. To support the introduction of the new multiple units several “electrification islands” are under construction at branch line termini or major junctions in the north of Germany, enabling the trains to operate at 40-60km between rapid charging.

Germany led the world in introducing the first trains powered by hydrogen fuel cells in mid-2022. The Alstom iLint trains were introduced in Lower Saxony after several years of pilot operation. A second larger fleet of iLints began operating north and west of Frankfurt am Main in December 2022; by mid-2023 all 27 trains should be in service. In both cases the hydrogen trains have been bought by leasing companies owned by the regional government, assisted by substantial subsidies from the German federal government.

Keolis exited the German market on January 1 2022, whilst Abellio lost almost all its German concession contracts in early 2022 following a period in administration during 2021, retaining just one long-term contract to operate electric services in eastern Germany. Abellio’s one other remaining contract, the Saxony-Anhalt diesel network will end by December 2023.

Other major contract operators changed. Despite having announced that it was not planning to bid for more contracts in Germany, National Express took on some of the biggest routes in the Ruhr region in the wake of Abellio’s abrupt departure, increasing its German revenue in 2022 by over 60% in the process. GoAhead suffered a difficult start to its Stuttgart area contracts in 2019 and has continued, like all major passenger operators in Germany, to suffer from shortages of qualified staff, especially drivers, which has affected the start of operation under its newest Bavarian contracts in 2022-23.

GoAhead has since changed its strategy to avoid bidding for further international contracts. This decision was announced in mid-2022 before GoAhead was acquired by Australian-based bus operator Kinetic and Spanish group Globalvia Inversiones, a transaction that was completed in late 2022.

The decision taken by many players to exit Germany or not participate in future tenders leaves less choice for regional transport authorities when letting contracts. DB Regio, Transdev and Netinera all remain active in the market, all winning or mobilising new contracts in 2022. Transdev took over operation of the Hannover S-Bahn network, which represented the first entire S-Bahn system lost by DB Regio in a tender competition. However, there was large-scale disruption during the first few months of the contract due to staff shortages and late delivery of refurbished trains. This situation was expected to continue into mid-2023 with additional replacement trains contracted.

The German government has announced it will introduce a new €49 national monthly Deutschlandticket valid on all regional trains, trams, metros and buses. Introduction was originally planned from this month, although it may be delayed until the spring.

This new offer follows the 9-euro ticket promotion, which ran between June and August 2022. More than 52 million tickets were sold and record passenger numbers were reported on some routes with overall passenger numbers up by nearly three quarters compared with 2021. While very popular, the €9 promotion led to massive overcrowding on some routes, and despite calls for a similar ticket to be made permanent, the financial and operational impact of a new monthly ticket at a similar price would have been prohibitively expensive.

From an environmental policy point of view, the 9-euro ticket resulted in more journeys made by rail, bus, tram, and metro, but barely altered the number of car journeys made, although the decision of the federal government to also fund temporary fuel subsidies in the same period probably contributed to the lack of modal shift.

The fundamental issue for the German industry is whether the €49 ticket is sustainable at a time of inflationary pressure with energy, labour and maintenance costs all rising faster than has been the case for many years. Many regional transport authorities have said publicly that fare increases are needed, although the €49 ticket, when introduced, will effectively cap the amount most passengers need to spend and therefore reduce overall revenue. DB Long Distance, which operates commercially without direct subsidy, increased its fares by 4.9% to 6.9% in late 2022.