New Zealand brings rail in from the cold

New Zealand’s government is preparing a new strategy that will be a step change in how the network is funded and how investment is allocated. David Burroughs looks at what this means for the industry. 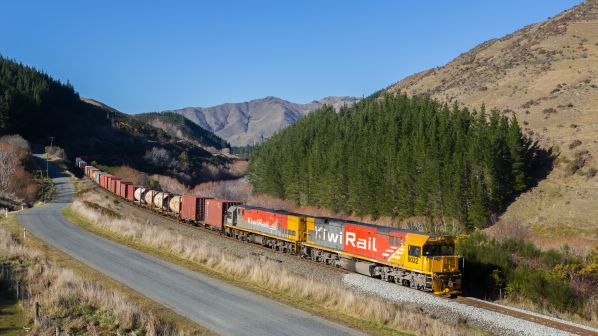 Rail currently has an 8% market share of freight in New Zealand, but is looking to grow this along the main trunk lines. Photo: David Gubler

FOLLOWING decades of policy presenting road as the primary method of moving people and freight around New Zealand, the country is beginning to develop a more multi-modal approach.

Rail is currently funded on a year-on-year basis, with planning undertaken separately from other land-transport decisions outlined in the Government Policy Statement on Land Transport 2021/22 - 2030/31 (GPS 2021).

This resulted in short-term decision making that led to a managed decline of the country’s rail system, with core operational assets such as rolling stock, maintenance depots and Interislander road-rail ferries reaching the end of their economic lives and in need of replacement. Operational restrictions, increased failure rates across the network and unplanned disruptions have also limited rail’s contribution to the transport network.

However, this is set to change. The Draft New Zealand Rail Plan, which was released in November last year, outlines a shift in the structure through which the strategy for rail is planned and financed.

The plan, the first draft of a regularly-updated strategy, will guide investment for the country’s 3700km 1067mm-gauge network over the longer-term by setting out the government’s strategic vision and priorities over a 10-year investment programme. Rail network funding will be channelled through the National Land Transport Fund (NLTF), allowing rail to be funded on the same basis as other land transport modes.

Rail network activities will be outlined in a three-year Rail Network Investment Programme (RNIP) developed by KiwiRail and guided by the rail plan, which will include a 10-year forecast.

“The truth is there is far greater demand for our services than we are able to supply.”

KiwiRail will work jointly with Auckland Transport, Auckland Council and Greater Wellington Regional Council to agree a programme of proposed rail network investment in the metropolitan passenger networks. These activities will be included in each region’s Regional Land Transport Plan (RLTP), which will then be incorporated into the RNIP.

Waka Kotahi NZ Transport Agency (NZTA) will be responsible for advising the minister of transport on how the proposed RNIP fits into the broader land transport investment programme under the National Land Transport Programme.

The proposals are currently passing through the Transport and Infrastructure Select Committee, and KiwiRail CEO, Mr Greg Miller, told the committee in February that the new framework would allow rail to play the important role it should in the country’s transport system.

“Our rail lines and our freight systems are so run down that it has taken a huge level of commitment from both the government and from our team to start moving the company into a position where it can return to profit,” Miller says. “The truth is there is far greater demand for our services than we are able to supply.”

Miller says that past funding models have resulted in short-term decision making that has led to cost cutting resulting in a lack of drivers, locomotives and wagons as well as a decline in fully usable track.

“Those decisions have resulted in higher track and machinery maintenance costs, higher repair costs and higher costs from driver shortages that lead to freight service limitations and increased costs from overtime, travel and accommodation,” he says.

“Our strategy to return to profitability and deliver a good return to our shareholders is threefold: we aim to run more services; get the equipment we need to be able to grow capacity; and put in place the technology that will enable us to track freight, and track profit and loss centres.”

“The draft rail plan is about making sure that rail - whether freight or passenger - is funded fairly and sustainably.”

Miller says the plan does not pit road against rail in a competition for funding, but instead will enable the two to better work together.

“Road freight is complementary to rail,” he says. “New Zealand’s shorter haul aggregate users don’t use rail because they don’t have rail that goes to where their customers are. Rail terminals, however, act as a hub, a place where freight can be taken off roads and put onto rail that is designed to take heavy loads, and transport the freight to ports or other cities for domestic distribution.

“The draft rail plan is about making sure that rail - whether freight or passenger - is funded fairly and sustainably over the decades ahead. It’s about making sure our network is up to standard, which for our customers means schedule integrity and reliability, and provides them the confidence to make greater use of rail.”

The final plan, alongside the final GPS 2021, is due to be published in the second half of the year and will be updated in future to reflect changes in investment priorities for rail.