Kansas City Southern has been at the forefront of the renegotiation of Nafta. President and CEO Patrick Ottensmeyer explains the company’s strategy for protecting and growing its cross-border business to William C Vantuono, editor-in-chief of Railway Age. 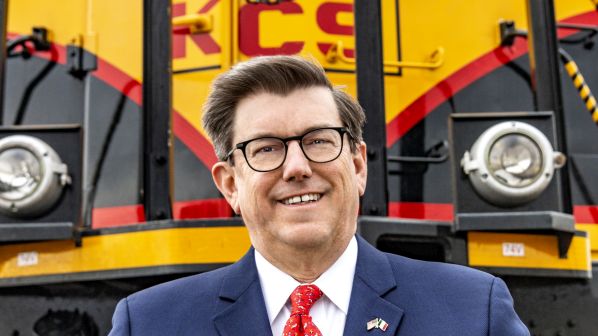 FREE trade in North America is critical to the success of Kansas City Southern (KCS), its customers, employees, shareholders, and the communities and states the Class 1 railway serves in the United States and Mexico.

Indeed, the passage of the North American Free Trade Agreement (Nafta) in 1994 was followed by KCS’ successful bid to operate a concession alongside Transportacion Maritima Mexicana on the newly privatised Mexican rail network in 1996. The Class 1 railway credits much of its recent growth to the success of these services.

In its 2019 financial results, KCS reported revenues of $US 2.9bn, a 6% increase on a 1% decline in loadings. Operating income was $US 886.3m and its reported operating ratio was 69.1%. Cross-border has been the fastest growing segment of the business. Volumes for the past two years have grown by 12-15%; in some quarters by as much as 18%, although overall volumes are flat, emphasising the situation in the US market.

Current president and CEO, Mr Patrick Ottensmeyer, also joined the company as CFO that year and he linked up with Haverty in selling the railway in the United States and around the world as a standalone publicly traded company with joined-up operations on both sides of the border.

“We were one of a few US publicly traded companies that didn’t participate in the celebration and the party that took place after the election in 2016.”

KCS’ importance in US-Mexican business relations is reflected in the appointment of Ottensmeyer as chairman of the US Chamber of Commerce’s US-Mexico Economic Council as the Trump administration renegotiated Nafta as the new United States-Mexico-Canada Agreement (USMCA).

Ottensmeyer says his role was born out of necessity to the company, its employees and customers.

“We were one of a few US publicly traded companies that didn’t participate in the celebration and the party that took place after the election in 2016,” Ottenmeyer says. “President Trump was elected, there was a Republican Congress, a Republican in the White House, stock markets were up, all the other railways were up the day after the election. We lost literally 12% of our market capitalisation in about the first hour of trading because we were so closely associated with Mexico and Nafta.

“I came to work the next day, not intending to write a letter that started with ‘Dear fellow Kansas City Southern Colleagues,’ but I did because I was told that there was a lot of concern about what this meant for our company. And in that letter, I said something like, ‘I’m going to try to get involved in the process and influence the outcome and protect our interests and those of our customers and employees.’ I’d been CEO for four months. I literally had no idea what that meant.”

What it did mean was a lot of calls to and eventually meetings with top US officials, including at the White House, and with members of the Cabinet and Congress, about what form any new agreement should take. It was a similar situation in Mexico.

“We really were outspoken in Mexico as well, because we are really a Mexican company and a US company that happened to be joined together at the top,” Ottensmeyer says. “We are not going to rip up our track and move it to Pennsylvania. We’re there for the long haul. We’re an important part of the economy.”

Ottensmeyer credits recognition that KCS had a different role to play with his appointment as the US co-chair of the US-Mexico CEO dialogue. The railway has invested more than $US 5bn in Mexico since 1996. As a result, he says the company was not just speaking for itself but for its customers.

“We were a little quicker to become outspoken, in defense of the US-Mexico relationship because of our role and our investment and the nature of our business,” Ottensmeyer says.

The resulting agreement offers key differences in the areas of intellectual property, e-commerce, and pharmaceuticals. In automotive, in particular, the rules have been changed to favour and increase North American content as well as to reform the labour market to halt the perceived flow of jobs to Mexico. A revised agreement signed by all three countries is currently awaiting approval in the US Congress.

The maintenance of free trade via the new agreement and KCS’ role in this process emphasises the company’s approach to its cross-border and general business - avoiding complacency and maintaining its independence.

“If you’re a car manufacturer building a new plant in central Mexico and you want service options to both railways in the east, we’re happy to do it.”

Ottensmeyer says the railway must always be on its toes because it is surrounded by much larger competitors.

However, the company’s size and location is also a major advantage. A key facet of KCS’ strategy in recent years is its willingness to offer services with connecting carriers and industry partners beyond its network. This is very important to the business. And under USMCA, this looks likely to continue.