No silver bullet to increase rail’s market share to 30%

Players across the European rail freight sector, including operators and the European Commission, agree that rail freight must increase its market share to 30% over the coming decade. While the consensus is that digitalisation has a major role to play in this modal shift, the question of who pays for this new technology remains, as David Burroughs explains. 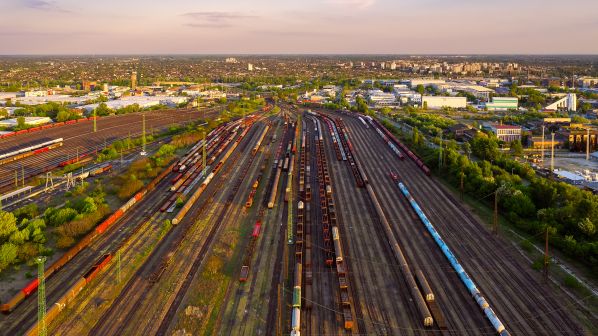 THERE is little debate around the importance of increasing rail’s freight market share across the European Union (EU). Rail currently accounts for 16.5% of all freight transported across the continent, while consuming only 2% of the energy used by transport. Moving freight from road to rail is a key strategy for contributing to the European Green Deal’s goal of decreasing freight’s CO₂ emissions.

Rail Freight Forward (RFF), a coalition of European rail freight companies committed to drastically reducing the negative impact of freight transport through innovation and a more intelligent transport mix, has set a goal to increase the sector’s market share to 30% by 2030.

During the Unlocking the full potential of rail freight in Europe online webinar on November 23, regulation revision and digitalisation were put forward as the major advances needed to allow rail to unlock its full potential and achieve this goal. The webinar was hosted by the Community of European Railways and Infrastructure Companies (CER) and German Rail (DB), in cooperation with the German Presidency of the Council of the EU.

“You have to realise that your obvious clients - the steel industry, the chemical industry, and so on - are already using rail,” the secretary general of the European Shippers’ Council, Mr Godfried Smit, told the webinar. “The market share that we have to seduce to use rail at the moment is more difficult.”

Five enablers have been put forward to increase digitalisation in rail freight:

DACs especially came to the fore towards the second half of 2020. Shift2Rail (S2R) and a consortium led by DB launched two connected projects in July to develop and test DAC on freight wagons, with the goal of selecting a single solution for use across Europe. RFF members and seven industry associations signed a Memorandum of Understanding (MoU) in September, expressing their support for the implementation of DAC on all European freight trains by 2030.

With DAC, freight wagons and their power, data and compressed air lines are coupled together automatically, removing the need for heavy physical work associated with manual coupling.

During the first stage of the project, 12 freight and tank wagons from DB Cargo and GATX have been equipped with coupling prototypes from four different manufacturers: CAF, Dellner, Wabtec and Voith. Technical tests are now set to take place to select the preferred coupling type.

In the second stage, a demonstrator train consisting of 24 freight wagons will be equipped with the selected coupling before operating in Germany, Switzerland, Austria and other European countries, which will include daily use in marshalling yards. The results from the project will then be integrated into the European DAC Programme, which was approved by S2R’s governing board on July 23.

“We have been dreaming about this for decades,” DB Cargo CEO, Mrs Sigrid Nikutta, told the webinar.

“Don’t reduce the EU to only a financing institution. We are a regulator and we bring in the European added value here.”

Walter Goetz, the head of cabinet for European transport commissioner

The introduction of DAC will eliminate the manual coupling process, which is currently performed 54,000 times a day by DB Cargo staff. The system will also allow the digitisation and automation of train formation, eliminating the need for staff to walk the length of the train to check couplings. Each year, DB Cargo staff walk a total of 700,000km during train formation, the equivalent of circling the globe 17 times. “Of course it might have health benefits, but from a business point of view in comparison with road it is a catastrophe,” Nikutta says.

As well as making current processes much more efficient, DACs would also support the growth of single wagonload services, which is seen as another key to attracting the yet-untapped share of the market.

Rolling out the selected DAC system will not be a simple task, and Nikutta says it will cost an estimated €6-8bn to equip all 500,000 wagons across Europe.

However, the general manager of the Association of German Transport Companies (VDV), Mr Oliver Wolff, warned that not introducing DACs across the continent risked creating isolated “islands” that would be cut off from the rest of the network.

“If you introduce it in France, for example, and not the rest of Europe, then France would become an island and the system would not deliver what it needs to deliver,” he said.

Wolff added that he is concerned that the available budget from the European Commission (EC) is limited, and urged the commission to take the lead on ensuring the system was installed across Europe.

“We really need to have it in every country because freight especially travels all over Europe, and we need a homogenous system,” he says. “I would be happy if we used the lessons we have learned with the ETCS system here with this coupling system with a strong approach and homogenous system implementation, in a timeframe that is ambitious and short so that freight can deliver even earlier what it needs to deliver.”

This was echoed by Nikutta, who called for further support from the EC. “We need wagons which are able to be coupled throughout Europe and that’s why we need this European funding, because if one or two or three countries say ‘we don’t have the money for this type of digitalisation,’ then the whole project will not be successful,” she says. “At the moment, we have this historic window of opportunity to achieve a harmonised DAC system throughout Europe.”

However, Mr Walter Goetz, the head of cabinet for European transport commissioner, Ms Adina Valean, said that while they are very supportive of DACs, the role of the EU is to facilitate the rollout of technologies such as DAC instead of simply paying for them.

“I see the role of the EC here as a standard setter… so that if a DAC system works in Germany it also works in France and any other railway system in Europe,” he says. “Don’t reduce the EU to only a financing institution. We are a regulator and we bring in the European added value here, and we are ready and willing to do this in the coming years.”

Research funding to support the development of technologies such as DACs was provided through facilities such as the Horizon Europe fund. Goetz said there was also the possibility that countries could request funding to install DACs through the €672.5bn National Recovery and Resilience fund, which was released in response to the Covid-19 pandemic.

“The EU is not normally the first body to finance rolling stock,” he said. “We usually do not finance rolling stock in the Connecting Europe Facility. The big money is now in the Recovery and Resilience fund, but it’s too early to say how it will finance things. I would put this DAC into the digital chapter and not in the rolling stock chapter, because then the financing is easier to justify at a European level.”

While the EU could provide some money, Goetz said public funding would never be able to cover the required investment, which is where the private sector needs to step in.

“We need investment for it, we need competition in the market and we need to provide better services,” he said.

Work is also continuing with the European Union Agency for Railways (ERA) to consider whether the technical specifications for signalling need to be updated in anticipation of the introduction of DACs, which would support rollout once adopted.

There is no silver bullet to fix the low share of freight on rail, and a number of other ideas were also put forward during the webinar.

Nikutta says that while DB Cargo currently operates 12,000 single wagonload services a week, this is hampered by the fact that more than 90% of road semi-trailers are not equipped to be lifted by crane, limiting the number that can be moved on and off rail.

“We are advocating for EU-wide specifications and financial incentives to make all semi-trailers cranable, which is not really expensive,” she says. “We can have this done in eight years.”

Improved labelling detailing how fruit and other consumer goods are transported has also been put forward as a method of informing consumer choice and, ultimately, encouraging shippers to use more environmentally friendly modes such as rail.

“We need consumers to realise that choosing organic cereals at their local store is not enough,” Nikutta says. “We need them - the consumers - to realise that there are more things to consider for a sustainable lifestyle. What if this food has been transported by diesel trucks all over Europe? One day I want to be able to walk into my local store, reach for my groceries and see a label that says ‘transported sustainably by rail’ on each packet of cereal and every package in the store. We can really make rail freight a part of people’s everyday lives.”

This was echoed by Smit and Ms Anna Deparnay-Grunenberg, a member of the European parliament’s transport and tourism committee.

“We would love to support this idea because you can see the efforts that shippers take to move to rail or inland shipping or a form of green transport,” Smit says. “It’s good that when you buy your bananas you can make the distinction between the bananas that are produced in a sustainable way but not transported sustainably.”

DACs, cranable semi-trailers or green stickers alone will not be able to create the momentum required to achieve something as large as a 14% increase in the market share within a decade. Instead, it will be a combination of these technologies and improved collaboration across the sector, as Goetz acknowledged.