North-South metro finally gets over the line

Amsterdam’s new North-South metro line finally opened in July after 15 years of construction. Quintus Vosman reports on the challenges faced by the project, and the benefits the new metro line will deliver to the Dutch capital. 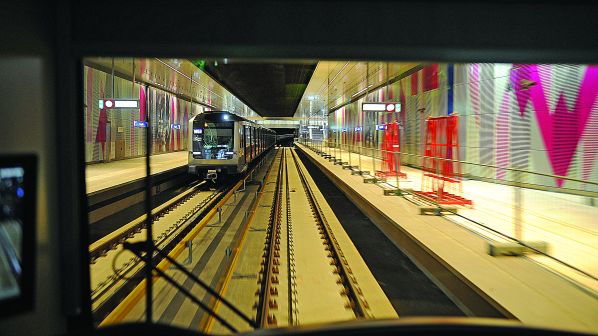 THE new mayor of Amsterdam, Mrs Femke Halsema, and eight citizens inaugurated the North-South Line metro on July 22, bringing to an end 15 difficult years of construction. The city centre’s second underground is the first rail link to connect the centre with the north bank of the IJ waterway.

The construction of the first underground metro line between Amsterdam Central station and Amstel was traumatic. The first section opened in 1977 with completion of the project in 1982. Large-scale demolition of houses in the historic centre was required to build the line which caused considerable disruption for a long period. The project also exceeded its budget. Tensions ran so high that there were riots and even a bomb attack when the final section was inaugurated.

As a result, all metro plans were cancelled and the word ‘metro’ became a long-lasting taboo in Amsterdam.
Several extensions in the 1990s were limited to surface or elevated sections, well away from the city centre, and were called tram lines locally.

At the start of the 1990s, with Amsterdam and surrounding municipalities suffering from worsening road congestion and the public transport network lacking capacity, a new light rail line was proposed between Amstelveen, Amsterdam South, the city centre, Amsterdam north of the IJ and Purmerend, which had developed into a major satellite town 20km to the north. Following feasibility studies and political decision making the proposal was scaled back to an underground metro line running from Amsterdam North, under the Central station and the historic city centre to Amsterdam South, where it would serve a new business district called Zuidas. However, the long-term option remained that the line might still become part of a light rail network serving the region.

It was clear that a new underground metro line in Amsterdam would not have any support among the population if the demolition of buildings was required. In addition, a considerable part of the canal area in the city centre is a Unesco World Heritage Site, so cut-and-cover tunnelling was ruled out. Instead, the tunnels would need to be bored even though tunnel boring had never been carried out in the Netherlands before.

Research was therefore required to establish whether tunnel boring was suitable under a sensitive, historic city, where the ground is saturated and soft: the best comparison is pudding. Some tests were made on other locations in the Netherlands, for example along the Betuweroute freight line, constructed in the first part of the 2000s with bored tunnels, and near the Heinenoordtunnel south of Rotterdam. The test results contributed to a positive decision by Amsterdam.

As the project was too large for Amsterdam to bear the entire cost, financial support was requested from the Ministry of Transport. Normally Dutch regions and cities can apply for a grant of up to 95% of the cost from the Ministry of Transport, leaving local sources to fund just 5%. However, with the North-South project, the ministry lacked confidence in the costings, in particular due to the tunnel boring. The government decided to make a lump sum contribution of €950m (excluding inflation) on condition that Amsterdam would bear all risks. Amsterdam accepted this and the Dutch Parliament approved the funding in 1999.

In 2002, Amsterdam city council approved the construction of the 9.7km North-South Line at an estimated cost of €1.11bn. Work started in Spring 2003 and was scheduled for completion in 2011.

Construction of the metro was complex. Tunnel boring was used under the centre of Amsterdam apart from at three city-centre stations, and as much of the line as possible was bored under streets to minimise disturbance to the buildings above.

Many city centre buildings are constructed on wooden piles, sometimes centuries old, which have been driven deep into the ground to find a layer solid enough to bear the weight of the structure above. This meant that lowering the ground water was not feasible, as the wooden piles would immediately start to rot. So, when the TBM encountered piles, it “ate” its way through the foundations. The ground was also sometimes frozen for stability and water control.

Another challenge was tunnelling under Amsterdam Central station, which dates to 1889 and is constructed on more than 9000 wooden piles on an artificial island. Due to the sensitivity of the structure, construction was not allowed to cause any movement or subsidence to the station while Dutch infrastructure manager Prorail insisted that the works were not allowed to disrupt train operation.

An extensive monitoring system was installed over the entire station to monitor the work and, as a result of these constraints, and because the line had to pass beneath the IJ waterway alongside the station, these tunnels are 15m deep with the Central metro station located next to the existing metro station, which is one level higher.

Using ground freezing techniques, a concrete table structure was constructed under the central part of the station to create a new foundation. Once this was completed it was possible to extract the soil and more than 3000 wooden piles. The remaining void was filled with water, thereby creating a canal connected to the IJ to provide a counter pressure to the ground water. Barges transported the floating tunnel sections to the station, where they were sunk and positioned into the correct underwater location, which is believed to be the first time a tunnel was sunk beneath a building. The area was enclosed and the water pumped out to allow further works to start.

Despite these measures, construction of the new line turned out to be far more complicated than expected. Delays and costs escalated rapidly, and the project seemed to be almost out of control. Supporters of the project claimed that the problems were unforeseeable while opponents said that their fears were justified. This culminated in a crisis in 2008-09, which claimed local political casualties. Amsterdam tried in vain to obtain more funding from the Ministry of Transport and started legal proceedings, which it lost. In 2009, a commission, under the presidency of former minister, Mr Cees Veerman, was set up to decide whether to stop or continue with the project. The commission concluded in favour of completing the project because so much infrastructure had already been constructed. Moreover, Amsterdam would have had to return the funds it had already received from the Ministry of Transport if it failed to complete the project.

In the end, the project was completed seven years late, while the cost had risen exponentially. Initially, Amsterdam expected to contribute €317m to the cost of the project but, by the end, the total project cost had soared to over €3.1bn, with severe implications for the city’s finances.

The metro line is 9.7km long, of which 7.1km is underground. The line is double track, apart from a short section at South station. There are eight stations, of which five are underground. Preparations have been made to build a sixth station at Sixhaven, which can be added when passenger demand justifies its construction, a decision is expected in 2020. This might also become a junction for a future line running west along the north bank of the IJ. In the next few years, South station and the parallel A10 highway will be rebuilt as part of the Zuidasdok redevelopment project.

De Pijp station has two single-track platforms one above the other due to the narrow width of the street above. The maximum depth of the line is about 32m.

Alstom has installed Communications- Based Train Control (CBTC) with cab signalling and moving block on the new line. The Automatic Train Protection (ATP) is based on radio and beacons and this system is set to be rolled out across the rest of the Amsterdam metro network.

The city did not opt for full automation, as there were plans to provide through services to other metro lines, so drivers are retained. However, the CBTC system allows driverless reversal of trains at the end of the line.

Although the North-South Line has moving block, a train is only allowed to depart if the platform at the next station is free to avoid trains stopping in tunnels, even though this reduces capacity.

The single-track terminus at South station restricts headways to six minutes. Five-minute headways will only be possible once the track layout at South has been modified.

Amsterdam decided to have a period of trial operation, possibly prompted by debacles with the Randstadrail project and the HSL South high-speed line. Shadow running took place from February until July 21. During this time, all systems were fully tested to avoid any nasty surprises on the opening day, while large groups of volunteers were used to test emergency plans.

Seven six-car Alstom Metropolis trains are needed for full operation. The end-to-end journey time is 15 minutes, and the line is forecast to carry 121,000 passengers per day.

When the line opened, major changes were made to the Amsterdam public transport network. In particular, tram lines were rerouted or withdrawn.

The North-South Line represents a major expansion of Amsterdam’s public transport network. Planning and construction proved very difficult and required innovation in construction techniques while the support for the project was vulnerable due to the poor experience from constructing the city’s first metro line. Despite the major setbacks, delays and cost increase, Amsterdam was able to complete the project in a very unstable and sensitive environment, without reviving metro traumas from the past and retaining the support of the local population.