Norway's government will announce a revised 10-year transport plan and details of several new infrastructure projects in 2013. Kevin Smith spoke with Harald Nikolaisen, Jernbaneverket's director of construction and investments, about what the infrastructure manager has suggested these plans include. 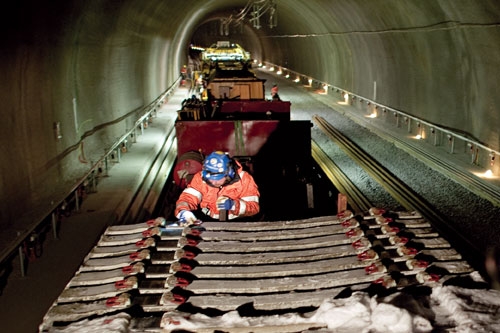 POPULATION pressure in the Oslo metropolitan region is driving much of national infrastructure manager Jernbaneverket's suggested developments in the latest four-year review of Norway's 10-year transport plan that will be published by the government next year and will run from 2014-2023.

Around 450,000 people are expected to relocate to the capital and the neighbouring county of Akershus over the next 30 years taking the regional population to around 1.5 million, and with limited scope and appetite to build additional roads, rail is considered the answer to solve future transport issues and provide the fluid society essential for a thriving economy.

Mr Harald Nikolaisen, Jernbaneverket's director of construction and investments, says that as well as the projected NKr 70bn investment in the latest national transport plan, ministers have the option to select several staggered options ranging from -20%, to +20%, and +45% of the original cost.

"A lot of people expect the government to go for the +45% option such is the perceived need for improvements to rail connections," Nikolaisen says. "One of the big discussions in the next few years is that a lot of competitors with rail transport are struggling to provide comparable services. And with more people moving to Oslo it is attractive for politicians to add new and improve existing links to increase the speed and reach of rail services."

With this in mind, the government is also currently considering the most ambitious railway construction programme in living memory. Jernbaneverket's director Ms Elisabeth Enger presented concept studies for a new inter-city network and a high-speed rail development plan alongside the national transport plan to the transport and communications minister Ms Magnhild Meltveit Kleppa in February. A decision on whether to proceed with the proposals is expected next year.

Ultimately the new network will slash current journey times on three inter-city corridors between Oslo, Tonsberg and Skien in the southwest, Oslo, Fredrikstad and Halden in the southeast, and Oslo, Hamar and Lillehammer in the north. The network is expected to cost NKr 130bn to construct over 10 years, which includes a five-year development phase and five years of construction with an option to extend the construction period to 13 years if required.

The inter-city network concept was developed alongside a high-speed rail plan, and its development might be the precursor to the eventual rollout of a full high-speed network. Studies conducted by Atkins on behalf of Jernbaneverket have identified four potential corridors for high-speed lines; north (Oslo - Trondheim), south (Oslo - Kristiansand - Stavanger), east (Oslo - Gothenburg - Stockholm), and west (Oslo - Bergen). Several scenarios have been studied including building the lines for 250km/h and 330km/h operation, along with assessments of the potential demand and revenues, and various alignments.

"The studies have shown that it is possible to build a high-speed network but that the costs will be high because of the tunnelling and other works required," Nikolaisen says. "However, if we show that the operation of the inter-city network will produce positive revenues it could be possible to pay for future investment through projected operating incomes.

"This is a big political discussion right now, and it is not our place to comment on that, but only to propose improvements to the system. The inter-city network is potentially the first stage of this. By offering 200-250km/h services we can build on that and eventually connect our larger cities and provide improved links to Sweden and their proposed high-speed plans."

Bolstering links to Sweden would also be of substantial benefit to freight. Nikolaisen says that railfreight is currently restricted in Norway due to relatively short passing loops on single-track sections, particularly between Oslo and Bergen. He says that many of the existing loops will be lengthened to accommodate trains of up to 750m which are typical in Europe, while several track-doubling projects included in the 2010-2019 plan, which will increase capacity and reduce journey times for both freight and passenger services, are already moving ahead.

This includes track-doubling and improvements to the Arna - Bergen line which currently handles up to 120 trains per day. The project involves building 1.3km of double-track line, installing new signalling and interlockings to increase movements into Bergen's freight terminal, and the construction of double-track line in twin tunnels through Mount Ulriken.

Groundbreaking on the new tunnel is due to get underway in 2013 and once the entire project is completed in 2018 it will be possible run trains every 15 minutes.

Another track-doubling project that will offer substantial time savings is the Eidsvoll - Hamar line which is currently one of Norway's busiest single-track routes. Ultimately 60km of track will be upgraded at an estimated cost of NKr 10bn by 2024. Work will be completed in stages with the initial 30km section between Minnesund and Steinsrud due to be completed by 2019. Journey times on the entire route will be slashed by an hour while the line will be conducive to an upgrade to high-speed as part of the route to Trondheim.

Modernisation of the Vestfold line from Oslo to the Vestfold/Grenland area of southeastern Norway began in 1993 and has been completed in several stages. The latest 7.8km Barkåker - Tønberg section opened in autumn 2011 and attention is now on the 14.1km Holm - Nykirke section, 12.3km of which will be in tunnel. The line includes an innovative new station at Holmestrand which is being constructed within a mountain and will allow non-stopping trains to pass at 250km/h. Budgeted at NKr 6bn, work began in August 2010 and is scheduled to be completed in autumn 2015.

The next phase is a brand new 23.5km line from Farriseidet to Porsgrunn which will provide a journey time of 12 minutes and will replace the notoriously winding 35km line between Larvik and Porsgrunn which takes 36 minutes for trains to traverse. Construction of the line is due to start this year and take five years to complete at an estimated NKr 5.3bn.

Work on a new 22km double-track line between Oslo and Ski will also start in 2014. The line will be designed for 200-250km/h operation and will include a 19.5km tunnel which will be Norway's longest when it is built and the first with two separate bores. The project is expected to take six to seven years to complete.

Upgrades of Jernbaneverket's signalling system is another major part of its future improvement plans. Nikolaisen says that the network's predominately relay-based signalling infrastructure is reaching the end of its life and as a result replacement solutions are being looked at. Inevitably ETCS is at the forefront of these investigations with an initial NKr 7bn included in the next transport plan to start the transition.

"There have been a lot of international studies on ETCS and ERTMS," Nikolaisen says. "We have participated in international forums and interacted with different national rail authorities across Europe. Denmark, Sweden, Switzerland and Germany have all selected very different strategies for ETCS, and our technical experts and staff have done a lot of work to understand what they have done so they might develop the right strategy for us."

A pilot ERTMS Level 2 project which is due to start on the 80km single-track Østfold East line from Ski to Sarpsborg in autumn 2013 is central to Jernbaneverket's efforts to adapt the technology to the Norwegian network. The line is currently equipped with 1960s relay-based signalling. GSM-R is already installed on the line with upgrades set to include new interlockings, centralised train control, and axle counters. Two joint projects with Swedish infrastructure manager Trafikverket are also underway regarding the adoption of onboard ETCS equipment.

Ultimately with significant amounts of construction taking place across the country in the next 15 to 20 years, Nikolaisen says that it is important that Norway is attractive to international investors. Large contracts will be offered that are designed to be conducive to large European businesses which will be encouraged to enter joint ventures with Norwegian partners. Turnkey contracts for signalling, catenary and telecoms will also be offered with this in mind.

"We are trying to prepare Norway to be more attractive to the world market," Nikolaisen says. "We have changed our strategy to be more tuned in with and respective of the value chain in the vendor market and we are encouraging international vendors to set up offices here. With the demand that is likely to be here in the next few years we should be in a position to further develop our own railway industry in Norway."

Long-term planning will inevitably help this process. And while Jernbaneverket is funded in yearly cycles, Nikolaisen is confident that the discussions taking place right now on the next 10-year plan will provide the assurances and security required by international investors.

"There are a lot of funding solutions available, and ultimately the politicians will decide what to use," he says. "But we believe it is essential that a project is fully funded prior to start up and that this funding has to be predictable in order to provide the level of competition required for international companies to come here and offer a cost-effective project."