SWEDEN has long been ahead of the curve in the liberalisation of its railways, and the country began setting a precedent for reforms across Europe as long ago as 1963, when the Transport Policy Act separated Swedish State Railways (SJ) activities into commercial and subsidised segments. 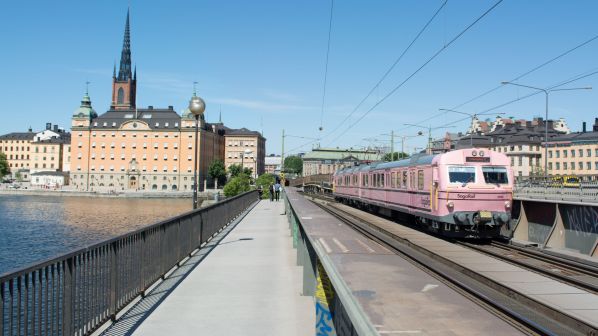 A quarter of a century later, SJ’s infrastructure was hived off with the creation of an independent company, Banverket (now Trafikverket), with county public transport authorities taking responsibility for the specification and procurement of regional train services.

This left SJ to pursue its commercial objectives as an operator of freight and passenger services, helping to strengthen the company’s balance sheet. Further reform in 2000 split the SJ group into seven companies, several of which were later privatised, with the passenger division retaining the SJ moniker.

SJ enjoyed a monopoly of the inter-city passenger market until full liberalisation in 2010. Initially the impact on the market was nuanced, with small operators such as Blå Tåget and Snälltåget providing only limited competition for SJ. However, everything changed in March 2015, when the launch of MTR Express, with its brand new bright red Stadler trains, shook up the Stockholm - Gothenburg market - SJ’s flagship route. Suddenly the gloves were off.

While the most visible signs of competition are out on the tracks, the battle lines between the incumbent and the newcomers have been drawn in cyberspace. Over the last decade, SJ has progressively developed its online journey planning and distribution system and today the company’s website, SJ.se, attracts more than a million users a week, with 97% of SJ tickets purchased through online sales channels.

SJ.se is therefore by far the dominant sales channel for train tickets in Sweden and access to this portal has become an issue of growing contention for open-access operators. During its set-up phase, MTR Express sought access to SJ.se and, given that Blå Tåget and Snälltåget fares were already in the system, assumed it too would be allowed into the fold.

However, SJ refused to show MTR Express times and fares on the site, prompting the newcomer to file a complaint with the Swedish Competition Authority (KKV). In May 2014 the KKV rejected MTR’s claim that SJ had violated the Competition Act by refusing to sell tickets for MTR Express services on its website, ruling that “a company has the right to choose its trading partners.” The authority concluded that access to SJ’s website is not essential for an open-access operator to enter the Stockholm - Gothenburg market and compete effectively. Undeterred, MTR pressed on with its preparations for launch.

In April 2018, armed with three years of revenue and ridership data, MTR Express decided it would make a second attempt to force SJ’s hand and filed a second complaint with the KKV. MTR Express argues that SJ’s online sales infrastructure was developed at a time when it was a monopoly operator and this legacy, combined with the incumbent’s brand equity among Swedish consumers, gives the company an unfair advantage. SJ has no real online competition from third-party distributors, yet is under no legal obligation to sell the tickets of other operators on its site.

MTR Express argues this is having a negative impact on its financial performance, despite growing ridership. Revenues in the 2017 financial year increased by 25%, reaching nearly SKr 250m ($US 28m), but net losses stood at SKr 94m after financial items.

Last summer SJ executive vice-president and head of product division, Mrs Caroline Åstrand, told IRJ that she believes the KVV will come to the same conclusion it reached five years ago and the status quo will continue.

However, this time MTR Express is not the only voice speaking out against SJ. On June 10, Swedish start-up Saga Rail suspended its weekend-only Stockholm - Linköping service less than four months after launch and filed its own complaint against SJ with the KKV, claiming that SJ’s refusal to display its times and fares was making its business unviable. “We had a business plan, to be profitable within two years,” says Saga Rail CEO, Mr Mats Nyblom. “Without an efficient sales channel we would never be profitable.”

According to Nyblom, SJ charges third-party operators a 7% fee on all tickets sold through its online booking portal.

Nyblom argues that restricting access to the dominant online sales channel is counter to the overall objectives of market opening, which has been supported by successive Swedish governments. “Vertical separation has created a lot of administration,” he says. “If we’ve gone to all this effort restructuring the railways why are we not concerned about creating an open market? If you don’t want competition there’s really no need to separate infrastructure from operations. We need proper access to a market of millions of people if our business is going to be viable.”

Nyblom says the dispute “could become a political question” if the KKV rules in favour of the open-access operators. If the judgement goes against them, the new entrants may find themselves reassessing their prospects in the Swedish market. 2019 will be a make-or-break year for competition in the cradle of railway liberalisation.