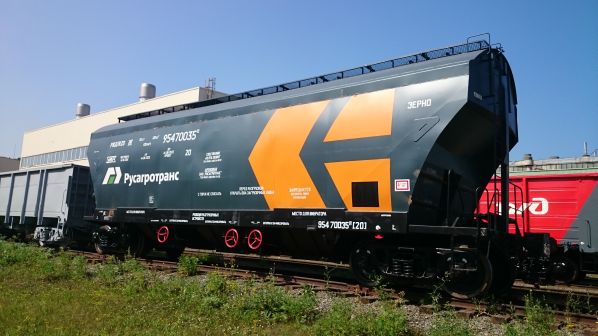 Grain accounts for nearly half of Rustranscom’s business, with the company owning a fleet of 41,526 hopper wagons.

The massive crop helped Russia, already the world’s largest grain exporter after it surpassed the United States in 2016, export a record 52.4 million tonnes of grain in the 2017-18 season. This was up 47% year-on-year, and included 40.5 million tonnes of wheat.

A report published by the United States Department of Agriculture (USDA) in February 2018 found that rising world wheat prices, weak domestic prices versus international prices, and the opening of new markets was expected to further stimulate Russian grain exports.

The sector is strongly supported by the Russian government, with grain producers across Russia enjoying a favourable tax regime; they are not obliged to pay corporate income tax, pay a reduced rate of VAT (10% compared to 20% for the entire market), and may utilise a simplified tax system called the unified agricultural tax.

Using these mechanisms, the Russian government provided approximately Roubles 24.282 trillion ($US 372.2bn) of support to the agricultural sector in 2018, compared with Roubles 220bn in 2017.

The government also supports grain transport in the form of discounts on the rail infrastructure tariff, applicable to approximately 28% of the total volume of grain freight rail transport, and by the construction of grain-handling facilities at ports and rail terminals.

While 2018-19 is expected to fall short of 2017-18 due to cold, wet weather conditions in the key spring wheat regions of Siberia and the Urals, Rustranscom vice-president, Mr Oleg Rogachev, says the bumper crop is more an indication of a larger trend than a blip.

“Ten years ago, the founders of the company, the shareholders and the managers, captured a very important trend of Russia turning from net importer of grain into a net exporter of grain which clearly meant that this industry was rapidly developing,” Rogachev says.

“Basically there was nothing strange in this turn because all of the prerequisites were there - a vast territory meaning a lot of arable land, the very convenient and close geographical proximity of major potential consumers of Russian grain outside of Russian territory, and constantly growing crops.”

RTC was founded in 2008, when the former Russian Railways (RZD) subsidiary Freight One and Rustranscom, established by Mr Konstantin Zasov and Mr Konstantin Stintsov, created the Rusagrotrans joint venture (JV) to operate approximately 8000 grain hopper wagons supplied by Freight One. Between 2008 and 2010, Rustranscom increased its hopper wagon fleet by 20,000.

Rail Transports Company (RTK) was established in September 2011 as a holding company for the group, and from 2012 RTK began to develop a consolidated corporate structure and approach to corporate governance.

In December 2012, RTK fully consolidated Rusagrotrans by acquiring the remaining stake from Freight One for Roubles 4.16bn.

In September 2013, RTK established the Astyk Trans grain rail operator in Kazakhstan as a 50:50 JV with state-owned operator Kaztemirtrans. In 2016, RTK entered the Azerbaijani market by co-founding Azrustrans, a JV with Azerbaijan Railways that aims to improve freight transport between Russia, Azerbaijan, Georgia, and Turkey.

Astyk Trans was consolidated by RTK in early 2017 after it purchased Kaztemirtrans’ share of the JV.

RTK registered its name change from Rail Transports Company to Rustranscom in July 2018. Zasov, now RTC chief executive, and Stintsov, RTC chairman, currently own 95.72% of the company, with the remaining 4.28% allocated to the top management share-based incentive programme.

Rogachev says the grain transport market was initially quite different from other commodities such as coal, iron ore and oil, as it consisted of myriad smaller players spread across a wide geographical area. “It was more of a consumer goods market or a retail market than a business to business (B2B) market,” he says.

This has since matured into a fully-fledged industry over the past decade.

“During those 10 years, which is a relatively short period, the Russian grain industry saw the growth of really big agriculture holdings with very high margins in their business and a very diversified portfolio of agricultural businesses,” Rogachev says. “They possess the facilities to not only harvest the grain, but also to process it, store it and finally export it.”

During this development, RTC looked to cement its place in the market by offering specialised hopper wagons which could carry grain more efficiently than multipurpose wagons.


"We had several trips to the United States studying how their grain transport and their grain industry works before trying to apply some of those best practices."

When RTC was looking to enter the market, Rogachev says it looked to learn from best practice around the world to better understand how the commodity can move efficiently across large distances.

Following this strong growth, RTC announced on April 1 its intention to list an initial public offering (IPO) on the London Stock Exchange, which was expected to raise around $US 300m to finance future expansion.

However, the company announced on April 18 it had postponed the IPO after its principal shareholders received a number of proposals regarding private equity transactions, which RTC said it had decided to pursue instead.

RTC currently operates along a number of major corridors, including:

As the Urals, Siberian and far eastern regions of Russia begin to generate larger grain yields, the length of routes for the transport of grain to points of export or main centres of consumption such as Moscow or St Petersburg is increasing. RTC is also looking at opportunities to develop routes into the growing Asian market, especially from Russia’s far east.


"The industry is looking to create a product that can be stockpiled, providing more security to the market and industry." says Rogachev

“We are primarily talking about geographies such as Central Asia and China via this north-south rail corridor, utilising the opportunities offered by the Russian Far East being so close to South East Asia, improving the overall speed of transport of grain and optimising logistics costs,” Rogachev says.

One of the biggest risks with the grain industry is the seasonality of the market, along with the adverse effect that weather can have on the harvest. Rogachev says that to combat this, the industry is looking to create a product that can be stockpiled and traded on an exchange throughout the year, providing more security to the market and industry.

“This would not only allow for a much smoother demand or supply depending on how you look at it, which would decrease the seasonality, but also it will open the Russian grain markets for a lot of the non-locally involved traders,” Rogachev says.

“In an ideal world a trader sitting in London or Hong Kong or New York should be able to open up a computer application and start trading Russian grain just as they can do with any other commodity in the world that is already traded through the exchange platforms.

“We’ve already made the first steps in this direction and RTC was a very active player in this. RTC and the Moscow Exchange partnered together to create a product that would allow true de-personalised exchange-type trading of grain with the transport included. This allows you to trade on the basis of the Russian Black Sea grain as a commodity, as an index, from any region in Russia.

“The volumes are not very significant yet. It’s the question of the market getting accustomed to this new platform. It’s about going out to farmers and showing how it works, what are the benefits, etc. But in a couple of years this could became the main trading platform.”