China is continuing the development of the world’s most extensive high-speed network at a breakneck pace. David Burroughs looks at the lines that have opened as the country begins to recover from the coronavirus pandemic, and the sections nearing completion. 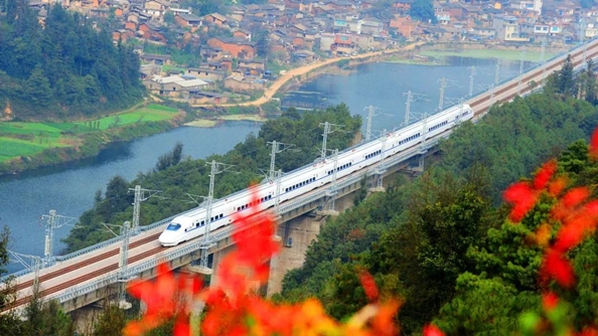 AS the source of the coronavirus, China was the first country to begin shutting down its economy and limiting movements in order to control the spread of Covid-19.

This also meant that China was one of the first to lift its lockdowns. As restrictions began to ease in March, construction was able to resume on a number of high-speed rail projects, as momentum was restored to the national high-speed network development programme.

Overall, China National Railways (CR) opened 1178km of new lines in the first half of 2020, including 605km of high-speed lines. For scale, the first stage of Britain’s High Speed 2 (HS2) project will be 225km long, with the full network around 531km long. June 30 also marked the ninth anniversary of the opening of the 1318km Beijing - Shanghai high-speed railway, which has since carried 1.11 million trains.C

Investment in the first quarter dropped to Yuan 79.9bn, down 21%, due to the coronavirus pandemic. However, work rebounded in the second quarter, with the country completing works worth Yuan 245.9bn, up 11.4% year-on-year, cancelling out the first quarter reduction. This included a Yuan 179.7bn investment in infrastructure in the second quarter, a 16.4% increase year-on-year.

This expansive growth peaked in the middle of the year, with CR launching services along a multitude of new sections of line with the introduction of the summer timetable, which features additional services to accommodate tourists and students travelling across the network.

CR faced a number of challenges during the pandemic, including a lack of construction staff, disruption to the raw material supply chain, and poor access roads.

This included the opening of the Shanghai - Suzhou - Nantong (Tonghu) railway, which began passenger services on July 1, six years after construction began. The 143km railway incorporates the 11km Shanghai-Sutong road/rail suspension bridge, which carries a four-track railway and a six lane highway, as its primary crossing over the Yangtze River. The bridge has a total length of 5.82km, including a 1088m central span with 330m-high support towers, along with 5.2km of connecting viaducts. The bridge is designed to allow 50,000-tonne container ships and 100,000-tonne bulk carriers to continue to sail beneath it on the Yangtze River.

The railway will improve transport links across the economically important Yangtze River Delta region. The line is integrated into China’s wider high-speed rail network in Shanghai, and will connect with the Nantong - Yancheng high-speed line, which is under construction.

CR is initially operating 44.5 pairs of passenger trains and six pairs of freight trains daily, at speeds of up to 200km/h on the line. The railway will reduce travel times between Shanghai and Nantong from 3h 30min to 1h 6min. The line has nine stations at Zhaodian, Nantong West, Zhangjiagang North, Zhangjiagang, Changshu, Taicang Port, Taicang, Taicang South and Anting West.

China is expected to invest more than Yuan 87bn in rail in the Yangtze River Delta in 2020, building more than 1000km of new lines.

On June 6, construction began on a 163km, 350km/h high-speed line connecting Shanghai with neighbouring cities in Jiangsu and Zhejiang provinces. The Yuan 38bn line will have seven stations. Construction also began on an inter-city line linking Yangzhou City in Jiangsu Province with Ma’anshan in Anhui Province.

Other new lines which opened during this period include:

The 309km Hefei - Huzhou section of the 350km/h Shangqiu - Hefei - Hangzhou (Shanghehang) high-speed railway opened on June 28, with full timetabled services commencing the following month. The section, which runs between Heifei, the capital of Ansei province, and Huzhou, in Zhejiang province, has 13 stations. The section completes the full 795km high-speed line, following the opening of the northern section between Hefei and Shangqiu in December 2019.

Costing around Yuan 99bn, the line has 29 stations, including five major interchanges. Up to 60 services are planned to operate daily in each direction.

The railway will ease pressure on the Beijing - Shanghai high-speed route. The project connects the provinces of Henan, Anhui and Zheijiang, and is intended to better integrate China’s central provinces with east coast cities. It is also hoped that the connections will stimulate economic growth in both central China and along the Yangtze delta.

The 125km, 250km/h Anshun - Liupanshui (Anliu) high-speed railway opened on July 8, reducing travel times between Guiyang and Liupanshui to 1h 9min. The line has eight stations, including three existing stations, and 89km of tunnels and bridges.

CR will initially operate 10 pairs of EMUs a day from Liupanshui, connecting with a number of destinations including Shanghai, Guangzhou, Chengdu and Chongqing.

The line is a branch of the Shanghai - Kunming high-speed line, and connects Liupanshui to the national high-speed network. Tickets for services on the line went on sale on July 7.

CR says it faced a number of challenges during the pandemic, including a lack of construction staff, disruption to the raw material supply chain, and poor access roads. Despite this, CR began preliminary works on a number of key projects including the Sichuan - Tibet line, Yanjiang high-speed line and the Xining - Chengdu line.

A number of key projects, including the Xi’an - Yinchuan high-speed line, the Hebei section of the Hefei - Anqing high-speed line, and the Huai’an - Zhenjiang line, are also on track to open in the second half of the year as scheduled.

Tracklaying for the 92km Beijing - Xiongan line, which will reduce travel time from two hours to 30 minutes, began in May. The line includes an 847m “sound-absorbing” tunnel which has been designed to reduce the level of noise produced during operation. Services will begin from the under-construction 475,000m² Xiong’an station, which will also provide a connection with the Beijing - Hong Kong high-speed line and the Beijing - Xiong and Jinxiong inter-city lines, along with metro services.

Track laying for the 250km/h Mudanjiang - Jiamusi line in Heilongjang Province, the northernmost line currently under construction, began in mid-June. The high-altitude and cold temperatures, which can reach -35°C in winter, pose challenges for construction and future operation.

Track laying for the 326.7km Shaanxi section of the 618km Yinchuan - Xi’an line was also completed in June. The line links Yinchuan, the capital of Ningxia Hui Autonomous Region, to Xi’an, the capital of Shaanxi Province. Track laying started in November 2019, with ballastless track in tunnels and ballasted track on other sections.

The opening of the new lines, coupled with the lifting of restrictions, resulted in a recovery in passenger numbers towards the middle of the year, after a strong drop in passenger patronage in the early months of the year due to the Covid-19 pandemic.

In order to accelerate the recovery of passenger numbers, CR says it is making use of the recently-opened lines to optimise services, and is also looking to track passenger flows in real-time using big data. This will allow the timetable to be dynamically adjusted to meet demand. CR is also looking to introduce electronic tickets across the entire network, with more than 2400 stations already equipped to accept them.

CR operated 6870 passenger trains a day in June, up 6.6% on the previous month, with 7.53 million passengers travelling on June 25 during the national dragon boat festival, a new daily record.

Freight traffic up despite Covid-19

CHINA National Railways (CR) carried 1.69 billion tonnes of freight in the first half of 2020, a 3.6% year-on-year increase. Freight revenue was Yuan 187.7bn, down 4.2% year-on-year. The average daily volume carried was 10 million tonnes in June, a new monthly record.

CR says it looked to capitalise on the advantages of rail freight during the pandemic, including its ability to carry large volumes, and established “green channels” and priority services to ensure shipments were delivered safely and on time.

China - Europe freight flows also increased, with 5122 services in the first half of 2020, up 36% year-on-year, including 1169 services in June, a new monthly record. The total volume of freight carried to Europe was 461,000 TEUs, a year-on-year increase of 41%. CR delivered 367 million items of equipment to assist in the fight against coronavirus, weighing 2.7 million tonnes.