France is slowly gearing up to open up Public Service Obligation (PSO) passenger contracts to competition from 2023, in line with European legislation. David Haydock reviews the current situation. 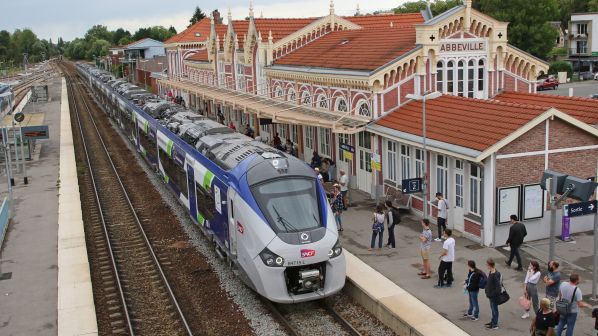 SUCCESSIVE French governments have done everything in their power to slow down the EU’s opening up of railways to competition over the past 20 years. Arguments have varied from deeming the measures as unnecessary, that liberalisation has not been effective elsewhere, and French National Railways (SNCF) was not ready.

Of course, French companies have been successful in neighbouring liberalised markets - notably Transdev and French National Railways’ (SNCF) subsidiary, Keolis. But with the EU confirming that 2023 is the deadline for all countries to open-up subsidised public service obligation (PSO) passenger services to competition, France is finally poised to follow suit.

In France, regional governments are responsible for defining PSO services, and the French government permitted the regions to begin experimental tendering for packages of services from 2019.

However, take up has been slow. Less than half of the regions are taking steps to tender a proportion of PSO Train Express Régional (TER) services, and the Court of Audit, which monitors public spending, has criticised several regions for not preparing for liberalisation.

In the regions that have not proceeded with tendering, existing contracts with SNCF are due to expire between 2023 and 2029 and it is not clear yet what will happen when these deadlines pass. As well as operating services, SNCF maintains rolling stock owned by the regions. The regions have also gradually been pushed to finance new or reopened lines, new depots and, more recently, even to renew track.

However, relations between SNCF and the regions are often tetchy. The need to obtain a great deal of data on all aspects of traffic and operation is a particular source of friction - for example, Hauts-de-France’s appealed to the rail regulator to clarify what data should be made available. Communication is also poor, emphasised by SNCF not always informing the regions of traffic disruption.

“Transdev will bid for most of the contracts for regional services to be tendered, and is also looking closely at opportunities in Île-de-France,”

One of the major problems facing the opening up of PSO services to competitive bidding is the relatively low cost coverage from fare box revenue. TER service revenue covers on average 27-30% of costs, with this figure only exceeded in two regions. Some rural regions do not even reach 20%. In addition, the cost per train-km in France is at least double that in Germany and many routes are not helped by the very few or no off-peak services available, meaning the majority of revenue comes from heavily discounted season tickets.

Despite the obvious challenges, several companies have confirmed their intention to bid for contracts.

SNCF says it will bid to retain all contracts and that its local operating subsidiary Transilien plus Keolis will bid for contracts and create ad hoc subsidiaries if they win in Île-de-France.

Transdev welcomed the publication of a tender in January by the Ministry of Transport to operate Intercities services between Nantes and Bordeaux and Nantes and Lyon on the Balance of Territory (TET) inter-city network, currently operated by SNCF Mobility, from the beginning of 2022. The company has also used examples from its activities in Germany to suggest that liberalisation can mean reopening of lines and increases in passenger numbers rather than closures as French trade unions suggest.

“Transdev will bid for most of the contracts for regional services to be tendered, and is also looking closely at opportunities in Île-de-France,” says Transdev spokesman, Mr Olivier le Friec. “We are most advanced with the Marseille - Nice service in Sud Provence-Alpes-Côte d’Azur (Paca). The company will base its offers on its experience in Germany, Sweden and New Zealand, for example, on a wide variety of services from S-Bahn city stopping trains in Hannover to overnight services from Sweden to Berlin.”

The RégioNéo joint venture of RATP Dev (55%), a subsidiary of Paris Transport Authority (RATP), and Getlink (45%), operator of the Channel Tunnel, was formed with the intention of entering the regional market in November 2019. “Our initial aim will be to bid for contracts in the Grand Est and Hauts-de-France regions where the two companies are already well established,” Mr Romain Dufour, Getlink spokesman confirmed to IRJ.

Italian State Railways (FS) subsidiary Trenitalia has made friends in the Paca region in recent years, operating Thello services from Marseille and Nice to Milan, and is likely to bid for contracts there. Another possible competitor in Paca is RDT13, which is owned by the Bouches-du-Rhône department which covers Marseille and Aix-en-Provence. RDT13 currently only operates rail freight services and buses in the area.

Grand Est is one of the pioneers of early tendering, offering two contracts. The first is for services on the non-electrified Nancy - Vittel - Contrexéville line. However, the contract is offered in an unusual format with the winner both managing infrastructure and running the train service. At present this line is closed completely between Xeuilley and Vittel and is freight only from Pont St Vincent to Xeuilley. The contract is expected to start in 2024.

The second tender is for DMU services between Strasbourg, Molsheim, Saint-Dié and Epinal and Strasbourg - Molsheim - Sélestat. This will be limited to train operation. The contract is expected to start on March 1 2022, will cover 1.5 million train-km a year and will last between eight and 15 years. Existing DMUs will be used.

Grand Est is also working with the neighbouring German authorities in Saarland, Baden-Württemberg and Rheinland-Pfalz to tender improved services on seven lines for launch in 2024. Grand Est expects to see a 30% drop in costs by tendering operation on these lines.

The Hauts-de-France region put three sets of services on lines currently being renewed out to tender in September 2020:

The Pays-de-la-Loire region intends to start the tendering process in July 2021 on two networks accounting for 30% of TER services: tram-train services from Nantes to Châteaubriant and Clisson, and Sud Loire covering Nantes - Pornic - Saint Gilles - Croix-de-Vie, Les Sables-d’Olonne - La Rochelle - Cholet, and Cholet - Angers. Operation will start in December 2023 at the latest.

The Sud-Paca region is tendering two service groups. The first is Marseille - Toulon - Cannes - Nice, which accounts 2.45 million train-km a year and is currently operated with vintage locomotive-hauled Corail stock. This will start in summer 2025 after construction of a new depot in Nice and the procurement of new trains. The contract will last 10 years and is worth €870m. The second contract will cover services around Nice: Les Arcs - Cannes - Nice - Monaco - Ventimiglia, Italy; Cannes - Grasse; and Nice - Tende. This will start in December 2024 and will total 4.3 million train-km a year.

Other regions have announced provisional plans. Ile-de-France (greater Paris) will open non-RER lines to competition from 2023, RER Line E, which is operated by SNCF and currently being extended westwards, in 2025, RER lines C and D (SNCF) from 2033 and RER lines A and B (joint operation by SNCF and RATP) from 2039.

The Auvergne-Rhône-Alpes region has talked of starting tendering with two small networks: tram-train services on the West Lyon three-line network and the Saint Gervais - Vallorcine line, which is metre gauge. No date has yet been announced. Finally, Nouvelle Aquitaine has already divided its offer into five lots covering services centred on Bayonne, Bordeaux, Limoges, Périgueux and Poitiers, but has not yet announced a timetable for tendering.

Almost all other passenger services in France are currently operated by SNCF Mobility. The majority is high-speed TGV along with six Intercités daytime routes and two overnight trains. The French government decided to reintroduce two overnight services earlier this year while the remaining Intercity services have transferred to TER.

A number of companies are on the verge of or are exploring the possibility of introducing main line services to compete with SNCF on an open-access basis.

Italian State Railways (FS) was set to launch two daily high-speed trains on the Paris - Milan route in competition with SNCF from June 2020. The Covid pandemic has delayed the launch to 2021 with the trains set to operate the service still undergoing testing. The Italian operator is also exploring the possibility of offering Paris - Brussels and Paris - Bordeaux services in competition with SNCF although the pandemic is likely to delay these plans. Covid-19 has also resulted in the withdrawal of FS subsidiary, Thello’s Paris - Venice overnight service, and a reduction in the frequency of its Milan - Nice trains.

German company FlixMobilty, an operator of long-distance buses in France, similarly postponed plans to launch FlixTrain services on three routes, including Paris - St Quentin - Brussels, in April. The company said the situation was more complicated than foreseen and that track usage charges were too high, a claim that has also been made by Thello.

Other companies which are monitoring the situation include RegioRail, which currently operates freight trains in France and is 50% owned by Railroad Development Corporation. German Rail (DB) has regularly said that it intends to compete with SNCF, most likely by extending its Frankfurt - Cologne - Brussels service to Paris. However, any plans have been shelved for several years. DB currently cooperates with SNCF on the Paris - Frankfurt and Paris - Stuttgart - Munich high-speed routes.

Railcoop is a cooperative venture founded in 2019 with the objective of restoring services to areas deserted by SNCF. While exploring rail freight and night trains, the company’s main project is to restore the “direct” passenger service from Bordeaux to Lyon via central France by the end of 2022.

The company announced in June that it is planning to offer three trains per day via Libourne, Périgueux, Limoges, Guéret, Montluçon, Saint-Germain-des-Fossés and Roanne and is proposing a 6h 47min journey time. It submitted a proposal to France’s Regulatory Transport Authority (ART) and is expected to learn whether it will secure the necessary train paths by September 2021.

Opening up of passenger services in France is now well on its way. However, the impact of the Covid-19 pandemic on tendering remains to be seen.

Some commentators fear that lasting damage to company finances and the high cost of operating in France may for now discourage potential bidders from branching out into France - Flixmobility being a case in point. Transdev, at least, believes than any delay will be short and that the process is essential to the future of French passenger services. Regional governments also increasingly seem convinced that the process will bring better and less expensive rail services. If all goes well, this will provide a timely boost to the country’s under-utilised regional network and efforts to curb climate change.