The German government looks on the verge of finally backing down from its policy of avoiding deficit financing. 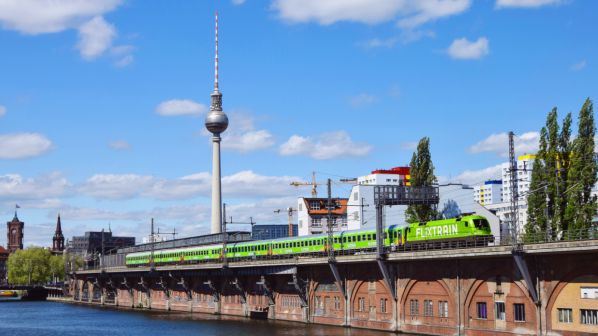 FlixTrain plans to expand its German route network and increase frequencies this year.

Introduced in the aftermath of the 2009 financial crisis, and long criticised by external observers including other European governments and increasingly the governing parties that created it, the policy has restricted capital investment, including in rail infrastructure.

With calls for an increase in investment, the government has announced plans for a Deutschland Takt national regular-interval timetable modelled on the Swiss approach. The idea is to introduce it in 2030 to encourage a modal switch to rail and increase the rate of growth. Key aspects of the plan include increased frequencies on inter-city routes and in some cases additional infrastructure at major stations and key junctions to accommodate the extra services.

The Strong Rail investment plan is aimed at encouraging large numbers of car drivers and road freight users to switch to rail.

Much of this will be financed under the €86bn LuFV III planning framework for 2020-2029 agreed by the German parliament in mid-November. Federal government contributions have increased by nearly 60% to €51.4bn with infrastructure manager DB Network responsible for most of the remaining investment.

German Rail (DB), the country’s largest train operator, presented its ambitious Strong Rail investment plan during 2019. The plan is aimed at encouraging large numbers of car drivers and road freight users to switch to rail. To achieve this, a substantial expansion of DB’s long-distance fleet is planned together with the construction of more high-speed lines.

DB has effectively subsumed the government’s Deutschland Takt initiative into its Strong Rail strategy while DB was a major beneficiary of the federal government’s climate protection package announced in late September. This will add another €20bn of rail investment up to 2030 with DB receiving a €11bn capital injection over the next decade. However, the policy has prompted questions from competitors about why DB is the beneficiary of the climate investment and how open-access services will fit into the future model.

Major investment in additional freight locomotives and maintenance facilities together with the recruitment and training of around 100,000 people is planned between 2020 and 2030.

The German passenger rail market grew by 1.7% in the first half of 2019 according to the German federal statistics service, Destatis, with full year results expected to show a similar trend.

The number of passengers using DB’s long-distance services continued to grow during the year and additional services and routes will be introduced this year. DB is buying 17 Stadler Kiss EMUs from Austrian open-access operator Westbahn, which it will progressively introduce on a new inter-city route from Rostock via Berlin to Dresden. DB will also introduce the first of 25 additional Bombardier IC2 trains on routes to Zürich in December 2020.

Construction of the new tunnels under Rastatt will resume after a three-year pause following the tunnel collapse beneath the Karlsruhe - Basle main line in 2017.

Construction will continue on several major projects which are due to open in the early 2020s such as the Ulm - Wendlingen high-speed line and the Stuttgart 21 project comprising a new underground through station and multiple tunnels.

Construction of the new tunnels under Rastatt will resume after a three-year pause following the tunnel collapse beneath the Karlsruhe - Basle main line in 2017. Increased freight capacity is a key driver for the Karlsruhe - Basle track quadrupling project and is also the motivation for new lines planned between Mannheim and Frankfurt, and from the Austrian border to Rosenheim, as the key German route for traffic which will use the new Brenner Base Tunnel when it opens in 2028. While public consultation for these projects will progress during 2020, construction is unlikely to begin before the mid-2020s.

The growth in passenger services as tendering authorities specify additional services, coupled with the age of existing train drivers, has led to a national shortage of train drivers. Unlike many EU countries where staff automatically transfer from one operator to the next when a new operator takes over a concession, this is rarely the case in Germany, unless specified by the contracting authority. This policy is aggravating the driver shortage as new operators have to recruit all the operating staff they need, while those employed by the previous operator often have no incentive to switch as they lose their existing employment benefits.

Efforts by train operators, with financial support from German regional governments, have led to an increase in passenger and freight train driver numbers to just under 31,000 nationally. Just as most German state governments have created train leasing companies, there has been serious discussion about the creation of similar employment companies to provide the train drivers.

In late 2019 Keolis lost a contract due to start in mid-December 2019 to operate S-Bahn services in the Ruhr as Rhine-Ruhr Transport Association (VRR) determined the operator was insufficiently prepared, mainly due to a lack of train drivers. Similar problems forced Abellio, which was due to take over operation of several Ruhr S-Bahn services in December, to subcontract them back to previous operator DB Regio for three months until March.

DB Regio, which remains the single biggest operator of passenger concessions, will lose significant contracts during 2020 when Abellio finally starts its Ruhr S-Bahn concession, and Abellio and National Express replace DB as the operator of Rhine-Ruhr Express (RRX) services across much of North Rhine Westphalia by December 2020. DB will also hand over the operation of the Hannover S-Bahn to another company in 2022.

DB has retained the Berlin S-Bahn and will introduce the first new trains on the network for 25 years in early 2021 after extensive testing during 2020. DB Regio’s profitability declined by €28m or 13.1% in the first half of 2019, and a similar decline is expected in 2020 as the scale of its activity continues to shrink.