Plans for a Polish high-speed network first suggested in the 1970s are beginning to come to fruition. Following the awarding of a flurry of contracts in recent months to undertake preparatory work for a 12-line network as part of the development of Poland’s air and rail-connected Solidarity Transport Hub (STH), David Burroughs talks to STH board member responsible for the railway component, Radoslaw Kantak, about the planned network. 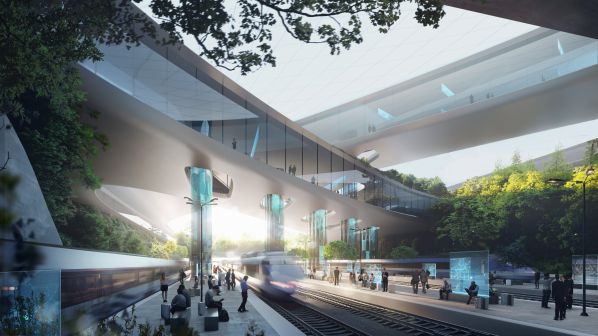 The rail element of the project will be funded by the Polish treasury and the European Union (EU).

POLAND is aiming high with its ambitions for high-speed rail, with plans to build nearly 1800km of new line by 2034, while upgrading around 4000km of existing lines. The plans are part of the Solidarity Transport Hub (STH), a major infrastructure programme centred around the construction of a new airport between the capital Warsaw and Lódz. Ultimately, the STH programme aims to reduce travel times from all major cities in Poland to the new airport to less than 2h 30min. This includes developing 10 rail “spokes” radiating from the hub, along with another two lines that will join cities without a rail connection to the network.

“Everyone thinks that the STH is only an airport,” says Mr Radoslaw Kantak, STH board member responsible for rail. “This is not only an airport; this is the whole transport system in Poland including the airport and railways, and we are working closely with another government institution in Poland, the General Directorate of Roads and Highways (GDDKiA). The main aim is to bring people closer together and to provide easier access to the network, especially the railway network.”

Discussions around the construction of a high-speed network in Poland can be traced back to the 1970s, when a line connecting Warsaw and Gdansk was proposed. Over the next few decades, these discussions were expanded to include other lines such as the “Y” connection between Warsaw - Lódz and Lódz - Wroclaw and Poznan. However, work on the network only began in 2017 after the government issued an investment preparation and implementation concept for the project.

The first stage of the project, which is scheduled to be completed by the end of 2023, including the design and feasibility studies for the airport and railway lines, is budgeted at Zlotys 12.8bn ($US 3.27bn). While the airport will be partially funded through commercial agreements, the rail element of the project is not a commercial undertaking and will instead be funded by the Polish treasury and the European Union (EU).

“This is not only an airport; this is the whole transport system in Poland including the airport and railways.”

The rail element of the project is split between two companies: STH is responsible for constructing 1789km of new high-speed lines, while Polish infrastructure manager PKP PLK is responsible for upgrading around 4000km of existing lines.

STH began drawing up tenders for the preparatory works phase of the initial 840km of the network in 2020. While most of these contracts have been awarded, some have been appealed, which has held up the design process. Kantak hopes that contracts for another 400km of line can be signed by the end of the year or January 2022.

Idom, Multiconsult, Transprojekt Gdanski and Arcadis were awarded a Zlotys 24.7m contract in May to undertake a technical, economic and environmental study for the 136km Warsaw - STH - Lódz section between the largest and third largest cities in Poland, while Egis Rail, Egis Poland and JAF Geotechnika were awarded a Zlotys 20m contract to undertake a feasibility study for the 140km Ostroleka - Lomza - Gizycko line in the northeast of the country. Preparatory works on the 42km Letownia - Rzeszów line will be undertaken by BBF, Ingerop Polska and Safege SAS under a Zlotys 9.73m contract. Planning of the 75km Katowice - Ostrava line, which in future could provide a connection from Warsaw to Brno, Bratislava and Budapest, will be undertaken by a consortium led by Egis Poland under a Zlotys 11m contract.

Metroprojekt Design Offices and Sud Architekt Polska have been awarded a Zlotys 73.6m contract to design a 4km tunnel beneath Lódz, running from Lódz Fabryczna station to Lublinek. The tunnel, which will form part of the North Sea - Baltic Sea TEN-T corridor, will be a part of the high speed rail network and will be electrified at 25kV ac. The tunnel will help reduce travel times from Lódz to the STH airport to 30 minutes and Lódz - Warsaw to 45 minutes.

Egis Poland, Egis Rail (France) and Jaf-Geotechnika were awarded a Zlotys 19.9m contract to undertake the technical, economic and environmental study for the STH Railway Hub, possibly one of the most challenging elements of the projects, which will provide an important interchange for passengers travelling by air, high-speed rail and road across Poland. The Hub will be fully integrated with the airport, with connections to most of the new high-speed lines.

Services on the high-speed network will initially operate at 250km/h, but Kantak says the intention is to design the lines to allow speeds of up to 350km/h in future. STH is now in the process of identifying which companies will be able to help achieve this target.

The project has received strong support from the European Union (EU), which Kantak says is a sign of its importance, and STH plans to apply for more than Zlotys 2.25bn in co-financing from the EU. This funding will be used for projects including rail development, the development of the Hub, construction of the Lódz tunnel, and the design of the Lódz - Wroclaw and Sieradz - Poznan lines.

The EU has already provided Zlotys 8m in co-financing under the Connecting Europe Facility (CEF) for preparatory work on part of the Katowice - Ostrava line, and in June announced it would provide Zlotys 108m through CEF’s Reflow instrument. This includes Zlotys 59.4m for the design of the Lódz tunnel, and Zlotys 49.5m to undertake studies for the Warsaw - Poznan line. This is the biggest subsidy won by an individual entity in European Union under the additional CEF 2021 call.

“We have won the competition between many, many companies which were trying to get money from the commission,” Kantak says. “It was a great pleasure that our project was chosen as one of the best in Europe. This project is seen as important for the whole European network.”

The Warsaw - Lódz - Wroclaw/Poznan line will form part of the TEN-T network, with the Lódz - Wroclaw line connecting with the planned high-speed network in the Czech Republic to provide a direct high-speed service between Warsaw and Prague.

“We have won the competition between many, many companies which were trying to get money from the commission.”

While STH is in discussions with the Czech Republic over the construction of the two networks to ensure the interconnected lines are built at the same pace, the international cooperation behind the development of the network goes even further. The Polish government has signed cooperation agreements with the British, French and Spanish governments to support construction of the lines. Korea is also aiding the development of the airport element of the STH. STH has been participating in EU-funded workshops with French National Railways (SNCF) since last year, and is due to meet with Spanish companies in mid-September.

As Poland’s first truly high-speed railway, the country has also worked with other European countries including Germany, France, Spain and Italy to produce Polish-specific high-speed regulations.

STH is also learning from the experiences gained during the ill-fated construction of Berlin’s Brandenburg airport, which finally opened in October 2020 nine years behind schedule and massively over budget.
Kantak says he sees the entire project as one big challenge, and one he is glad to be a part of. He expects the biggest challenge to be managing the various major investments that are included in the project, including the railway lines as well as the airport terminal and station.

“We have to look closely at how the schedules will be planned,” he says. “Looking also at the bad experience in Berlin, we’ve already had a couple of meetings with some specialists who are involved in construction there, so we do not make the same mistakes as the investor of the Berlin Airport made.”

Another issue that requires close management and attention is the availability of skilled consultants and contractors as the country pushes several major infrastructure projects. PKP PLK already has plans to undertake work worth a few billion Zlotys, while GDDKiA has around Zlotys 130bn in work planned. With STH now the third major company implementing a landmark infrastructure programme in the country, careful coordination is necessary to identify and allocate the available skills to deliver each of the projects.