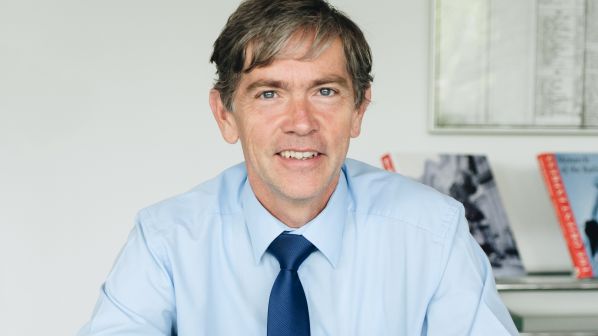 IMPROVING rail’s cost competitiveness and attractiveness has been at the heart of the European Union’s (EU) key legislative policies for the sector over the past decade or so.

The Fourth Railway Package and infrastructure investment in the TEN-T network via the Connecting Europe Facility (CEF) and regional Cohesion Fund epitomises these efforts. However, as lobbying ramps up for the next legislative period, which is set to be defined by Europe’s Green Deal, Mr Libor Lochman, executive director of the Community of European Railways and Infrastructure Companies (CER), says the sector is at a critical juncture.

While the general perception is that rail has received its fair share of investment in recent years, the reality is that the levels of investment are far from enough. Interoperability issues and a lack of capacity means that significant modal shift, for passenger and freight, is still some way off.

Rather than point the finger at the EU, Lochman says more needs to be done by the member states to increase rail investment and to bring down costs for users. Policies should prioritise getting more people and freight off the roads and onto the railways, reducing congestion and cutting emissions.

“Right now, we don’t have the right mobility strategies in all of the countries of the union,” Lochman says. “This is not just the governments but the transport ministries where in some cases they do not even have a transport strategy. If you don’t have a transport strategy, how do you determine the role of the railways? And then consequently how do you push all of that country’s politicians to dedicate a sufficient portion of their investment budget towards railway infrastructure?”

In countries where there is a definitive transport strategy, rail is often playing catch up.

For example, the German government announced a €20bn boost in rail investment as part of a climate protection package in late September which was followed by a €86bn budget allocation to support rail infrastructure investment between 2020 and 2029, a 41% increase over the previous plan. While Lochman says the funding is certainly welcome, he says it comes after rail infrastructure and services have been comparatively overlooked for the last 10-15 years. “There needs to be a better balance between what they have and what they are investing in roads,” Lochman says.

In addition, Lochman says green infrastructure discussions tend to focus on the electrification of the road network and not rail.

“This is a misconception,” he says. “What we need is to find the right balance between the mode that is already green and is suffering from a lack of high-quality infrastructure capacity and what you need to do on the roads to make them electric.”

CER, which is based in Brussels, is all set to lobby in rail’s interest at the European Parliament and European Commission as the new legislature takes hold. The foundation of CER’s recommendations for the new EU legislative period are the five measures at the centre of the organisation’s five-year development policy approved by its board in February 2019:

For the Green Deal, CER says the EU should set ambitious but realistic milestones for decarbonising EU transport for 2030, 2040 and 2050. A shift to rail should be encouraged for both passenger and freight for cross-border travel up to 1000km with marginal social cost pricing such as ‘polluter’ and ‘user’ pays.

“We will be utilising technology that is in place and adapting it to the railway’s needs.”

CER also calls for the expansion of the CEF budget for transport, including electrifying more railway, digitalising infrastructure and reducing freight noise as well as supporting rail research programmes. Securing a level playing field for rail is proposed by introducing robust carbon pricing for transport, including taxing energy used in aviation and maritime shipping, ending subsidies for flying, and making road charging more comprehensive. Other initiatives include swiftly implementing the TEN-T regulation to improve cross-border interoperability and temporary waivers on track access charges which will reduce the customs burden for rail freight operators.

Lochman says that in line with these demands, the sector understands that performance must improve. A priority is to introduce the IT technologies necessary to support the data systems at the foundation of railway digitalisation - whether this is communication services for passengers or for freight. “This is not about developing anything from scratch,” Lochman says. “We will be utilising technology that is in place and adapting it to the railway’s needs.”

Mobility as a Service

He also says the sector now widely recognises the importance of the concept of Mobility as a Service (MaaS) and is actively working in this area. And with the scope for constructing new lines limited, automation is considered another key deliverable to improve the level of service, specifically by increasing capacity, and improving energy efficiency and asset performance.

Several mainline Automatic Train Operation (ATO) programmes are underway in Europe, notably by French National Railways (SNCF) and German Rail (DB), which are sharing standards and working closely on their individual projects, and Netherlands Railways (NS). However, Lochman says automation should not be confused with downsizing staff but as part of a reskilling process which will result in the redeployment of employees.

CER works closely with the European Transport Workers’ Federation (ETF) to shape both a common agenda and a joint work programme for the sector’s workers. One element of this programme is improving the attractiveness of work in the sector, with an emphasis on attracting women into the industry and preparing the workforce for digitalisation. In addition, CER is working on the concept of a virtual European Railway Academy, which Lochman hopes can help to develop a more flexible workforce and overcome rail’s current language barriers which will help the sector to match the working patterns of today where people are willing to cross borders.

“DB, Austrian Federal Railways (ÖBB), and SNCF are all interested in this, but it is not restricted to them, it is a subject we need to run jointly and with the wider industry,” Lochman says.

Automation and increasing line capacity is a potential game changer for the rail freight sector in Europe, which struggles with securing paths. Lochman praises the vision of the Rail Freight Forward initiative to increase rail freight volumes to 30% of all freight carried in Europe by 2030. However, while he says rail freight must reduce its costs and improve intermodal connections, guaranteeing a level playing field is crucial to RFF’s success.

“User pay charging for infrastructure and polluter pay charging for all of the emissions that are currently internalised to society, need to be put back to the emitter,” Lochman says. “Similarly, for passenger transport, flying is extremely cheap. But there are subsidies for the airport, the fuel is not taxed, there is no VAT on tickets for international services. If you put all of that together of course you will not find a customer who is willing to pay three-times more to travel by train for the same distance even if it is time competitive.”

The level playing field is also relevant to funding. However, playing on its green credentials could help rail to gain the edge with Green bonds increasingly touted as a means to finance major infrastructure projects.

SNCF is an early adopter with SNCF Reseau issuing seven Climate Bonds worth a combined €5.7bn up to August 2019. The money raised is used for maintenance, upgrades and improving the energy efficiency of the system as well as new line and extension projects and efforts to preserve biodiversity and natural resources. Lochman says CER is actively encouraging its members to explore similar opportunities.

Funding for research and development is another area where rail is in a fight with other modes. Shift2Rail is Europe’s flagship rail research initiative and launched its inaugural catalogue of solutions in October.

“We will be utilising technology that is in place and adapting it to the railway's needs.”

While a positive step, Lochman says rather than solutions, the catalogue is a list of expected deliverables which he hopes will turn into solutions. He says rail has traditionally been good at delivering reports and demonstrators, but slow at converting these into usable products. The hope is that Shift2Rail will reverse this trend, and Lochman says this is imperative as the process of securing funding for the next phase of the programme under Horizon Europe, which will run from 2021-2027, ramps up this year.

“We have to demonstrate that we can deliver,” Lochman says. “If we cannot, once again we will have difficulty convincing the politicians and the policy makers to reserve a significant budget for the future research agenda.”

Pressure is similarly on the sector to realise the cost savings at the heart of the Fourth Railway Package. For the market pillar, Lochman says as far as CER and its members are concerned, the legislation is in place and the market is open. He says it is not the fault of the incumbent railways that there are not always competitors in bids for operation contracts and enforcing this legislation is very much the responsibility of the individual member states.”

For the technical pillar, Lochman reiterates that the sector is at a key point, with transposition taking place in some countries and expected to take place in others in 2020. He says he is encouraged by the early authorisations but that the sector now needs to progress to the next step. 2020 then is another critical year as efforts to reduce the fundamental cost of running Europe’s railways begin to kick in.

“I hope from 2022 we can go beyond the baseline of 2018-19 and we will be able to say that the new processes for safety authorisation embedded in the Fourth Railway Package have led us to cost reductions,” Lochman says. “If we fail, I am not sure we will get a second chance.”

CER has more than 70 members and partners, ranging from state-owned incumbent passenger and freight railways to new entrants and private operators. CER’s members serve 71% of the European railway network and are responsible for 76% of Europe’s freight business and 92% of passenger operations. The membership hails from the EU-28 countries as well as Norway and Switzerland, and EU candidate countries North Macedonia, Montenegro, Serbia, Turkey and countries in the Western Balkans. The organisation also has partners in Georgia, Israel, Japan, Moldova and Ukraine.