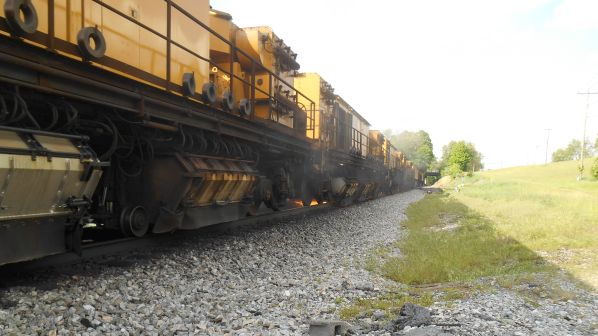 RAIL grinding is a well-established maintenance activity used by railways to address various forms of damage that develop on rails due to wheel-rail interaction. The technology was initially developed and applied to eliminate surface defects such as corrugations, rail end batter, and wheel burns. Grinding was later expanded to maintain the rail profile shape and to address surface-initiated rolling contact fatigue (RCF). By managing rail damage, the safety and reliability of the rail infrastructure can be improved.

Corrective or preventive rail grinding are two common strategies employed by railways. A large amount of rail metal removal and longer periods between grinding interventions are associated with corrective grinding, whereas preventive grinding is associated with a lesser amount of metal removal and more frequent grinding interventions. The application of these two strategies to manage and reduce the damage observed on rails has been explored by researchers at Transportation Technology Center Inc (TTCI) under the Association of American Railroads’ (AAR) Strategic Research Initiatives Program.

TTCI performed two rail tests in a 5-degree curve on the High Tonnage Loop (HTL) at the Facility for Accelerated Service Testing (Fast) near Pueblo, Colorado, United States. The first test focused on assessing the wear and defects of intermediate strength rails and was performed between 2012 and 2016. The focus of a second test was to study the effects of track gauge variation (narrow and wide) on rail performance and was conducted between 2016 and 2020.

The HTL 5-degree curve has 101.6mm of superelevation. The Fast train comprises three to four locomotives and between 100 and 120 coal wagons with a 35.4-tonne axleload. The Fast train runs equal clockwise and anticlockwise laps at an average speed of 64km/h around a 4.3km loop to apply track loading and accumulate tonnage on the track in an accelerated fashion.

In the past, excessive gauge corner shelling of the rails forced earlier rail tests to conclude prematurely. For this reason, both the intermediate strength rail test and the track gauge test included preventive grinding to remove surface initiated RCF and inhibit shell initiation at the rail gauge corner.

Preventive grinding cycles were performed at intervals between 54 million and 63.5 million gross tonnes (MGT). Although grinding was not the focus of these earlier tests, the effects of preventive grinding could be assessed based on the condition of the rails before and after grinding. Preventive grinding led to a longer service life of rails during the intermediate strength rail test with the rail lasting 542 MGT.

Fatigue-generated shells were observed in the gauge corner of high rails between 170 and 347 MGT during the test on the effects of track gauge. In total, 12 shells formed during this time. Gauge corner shelling can lead to the development of a transverse defect, and subsequently, a rail break. Fatigue defects like shells originate due to repeated cycles of high contact stresses, making the frequency of contact an important factor in shell formation.

To determine the frequency of contact that contributed to the formation of the gauge corner shells, wheel profiles were measured on three locomotives and 11 of the coal wagons of the Fast consist. The wheels of the Fast train wear uniformly, meaning these measured wheel profiles are representative of the entire Fast train. The rail profiles were measured in the 5-degree curve at 299 MGT before grinding and at 312 MGT after grinding. Wheel-rail contact analyses were performed with TTCI’s Nucars software and VTProfile. The contact stresses were analysed considering a 0.254mm lateral displacement of all simulated wheelsets.

The frequency of contact in a small contact band on the gauge corner was studied. Figure 1 shows the condition for one train pass with wheel-rail contact conditions averaged over three locomotives and 110 times the average distribution of wheel profiles measured from the 11 wagons. Figure 1 shows the frequency of contact in this contact band at different nominal contact stresses on the gauge corner changed before and after grinding in the narrow and wide gauge zones.

The wide and narrow gauge zones had high peaks of the frequency of contact in the stress range of 150-220 ksi. After grinding the peaks reduced significantly for the wide and narrow gauge zones, although they shifted to higher stresses with the frequency distributions spreading over the wider range of 150-350 ksi. The grinding reduced the high frequency contact occurrences reducing the high number of cycles that would accumulate to form a shell. This example illustrates the importance of preventive grinding to maintain a favourable rail profile shape to reduce fatigue related rail defects.

In-situ ultrasonic testing (UT) of rails is an important technology employed by railways to detect internal rail flaws or defects. When internal flaws and defects are reliably detected, railways can effectively maintain the track to guard against failures and thus increase the safety and reliability of their infrastructure.

When severe RCF, spalling, or other near-surface damage is present, it may shield and prevent the UT signals from penetrating the rail material. This shielding effect reduces the effectiveness and reliably of the technology in detecting flaws and defects. Poor rail surface conditions result in poor confidence UT results and will be referred to as “rail exceptions.”

When rail exceptions are encountered, typically rails are ground back to a state of acceptable UT signal strength or replaced. If rail exceptions are discovered shortly before a visit from the rail grinder, they often receive corrective grinding in an attempt to allow a valid test during the subsequent UT inspection. Alternatively, a railway may elect to avoid extra grinding if, for example, the railhead is heavily worn, and it makes more sense to replace the rail. Also, if corrective grinding is attempted and UT results from the subsequent UT continue to provide insufficient confidence, the rail exception will be removed from service.

TTCI investigated the effectiveness of corrective rail grinding to restore high confidence UT results through the analysis of estimated metal removal depths of a large number of sites. Rail profile measurements were not taken at these sites to determine the depth of grind accurately. However, comparison of pre-grind and post-grind rail profiles collected during a previous, detailed investigation of rail grinding showed that a large production rail grinder can remove as much as 0.3556mm per pass at low speeds and between 0.1524 and 0.2032mm per pass at typical grinding speeds. These values were used to estimate the amount of metal removed by grinding through scaling the values based on the grinder model, grinder speed and number of passes.

Multiple railways provided dates, locations and outcomes for their rail exceptions. This data was cross-referenced with grinding data provided by a vendor to identify locations that were ground between the date they were first identified as rail exceptions and the date the affected rails were either removed from service or received a valid test. A total of 88 rail exceptions were analysed, with 68 of these sites receiving successful corrective grinding.

Some rail exceptions can be treated with relatively little metal removal, though others require significant metal removal. Removing too little metal during corrective grinding leaves the possibility of wasted effort if the subsequent UT does not provide a high level of confidence.

In conclusion, although no blanket statement can be made about the rail profiles that would reduce shelling initiation or the depth of rail grinding that would result in high confidence UT, managing rail damage by grinding improves the safety and reliability of the rail infrastructure.