Netherlands Railways (NS) has postponed a major revamp of its national timetable mainly due to the late delivery from Alstom of a fleet of 200km/h trains. As Quintus Vosman reports, NS also faces an uncertain future in light of the Covid-19 pandemic. 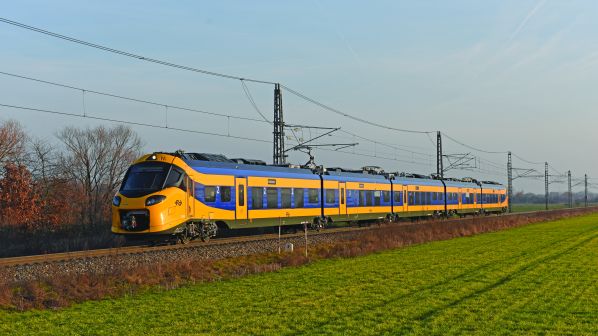 NETHERLANDS Railways (NS) announced on February 17 a one-year delay to the introduction of a radically new timetable because of delays with the supply of its fleet of inter-city New Generation (ICNG) 200km/h trains from Alstom. The new timetable, which was due to start in December, would have seen a further integration of the HSL-South high-speed line into the domestic network.

The coronavirus pandemic has impacted the manufacture, testing and authorisation of the new trains. “Travel restrictions, quarantines and delays in supplying components from different parts of the world slowed down production,” NS said. In addition, test running in Germany was delayed following an accident involving two ICNG test trains while in transit to the Rübeland Railway which is electrified at 25kV. Nevertheless, testing of the first ICGN trains is now underway in the Netherlands.

Despite the delay, in December NS will gradually start to replace the 160km/h locomotive-hauled trains, which have been operating between Amsterdam, Rotterdam and Breda since HSL-South opened in 2009, with the ICNG trains which will initially be restricted to 160km/h. The new trains will also be introduced on The Hague - Rotterdam - Eindhoven route. However, their introduction is subject to the granting of Authorisation to Place in Service.

“We are taking this decision reluctantly, but also from the conviction that we do not want to introduce these important trains under time pressure,” says Ms Jantina Woudstra, NS director of network development responsible for the timetable. “The fact that the coronavirus pandemic is now slowing down the ICNG programme is very annoying.”

Provided sufficient ICNG trains have been delivered, NS hopes to introduce new inter-city services in December 2022. These will run from Breda and/or Rotterdam via HSL-South to Schiphol Airport and on the conventional network via Amsterdam South to Groningen and Leeuwarden in the north and Enschede in the east. These services will also benefit from upgraded infrastructure and the Lelystad - Zwolle Hanze line which allows 200km/h operation in combination with ETCS.

“We are taking this decision reluctantly, but also from the conviction that we do not want to introduce these important trains under time pressure.”

When 200km/h ICNG operation is authorised on HSL-South, NS plans to take full advantage of the high-speed line for domestic services for the first time and cut journey times between Amsterdam, Rotterdam and Breda. However, full deployment of the ICNG fleet is not now expected until 2024.
The diversion of the north-south inter-city service from Amsterdam Central to Amsterdam South will free up capacity for the introduction of a high-frequency service between Amsterdam Central, Schiphol Airport and Hoofddorp, albeit a year later than originally planned.

NS still plans to improve services with the start of the new timetable in December by increasing the number of corridors with 10-minute interval services. New 10 minute-interval inter-city services will be introduced from Schiphol Airport via HSL-South to Rotterdam and via Utrecht and Arnhem to Nijmegen, while a Sprinter service at the same frequency will be introduced between Rotterdam and Dordrecht. In future, NS plans to introduce five-minute-interval Sprinter services in the Rotterdam area, to be called City Sprinter.

At present the 30 minute-interval Amsterdam - Vlissingen inter-city service calls at all stations between Roosendaal and Vlissingen. A new stopping train will be introduced on this section so one inter-city service per hour can skip most of the intermediate stations. This will provide a faster connection between Vlissingen, Rotterdam and Amsterdam.

The 2022 timetable also foresees an increase in Eurostar services between Amsterdam and London to four trains per day, but this depends on the recovery of international travel following the pandemic. Currently only one Eurostar service is running per day.

Indeed, NS has been badly hit by the effects of the pandemic and it made a record loss of €2.6bn in 2020. NS has been able to maintain a minimum service thanks to state aid. But the prospects for recovery are not bright as NS does not expect passenger volumes to recover to 2019 levels until 2025. Until then NS will continue to require financial support from the Dutch government.

However, there is not much enthusiasm politically to maintain train frequencies while passenger volumes remain depressed and NS continues to make heavy losses. A decision on whether to cut back services will have to be made when the new Dutch government takes office.