Sir John Armitt, the chair of Britain’s National Infrastructure Commission (NIC), told the Bentley Year in Infrastructure conference in London that it isn’t any one technological feat that will solve the issues facing the world - it is collaboration. David Burroughs was in the audience. 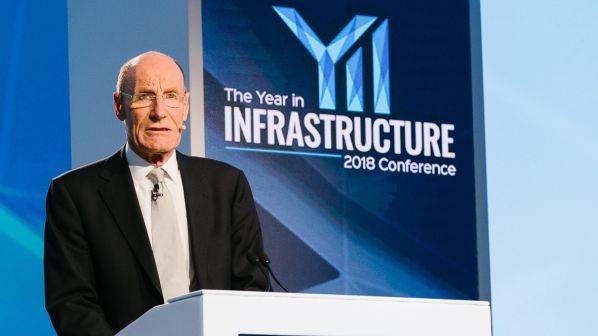 Infrastructure is not for engineers. It is by engineers for the benefit of the general populations.

GROWING and ageing populations, major population shifts towards cities and urban environments and a growing awareness of our responsibility to reduce the causes of climate change all pose challenges around the world.

Many people are focused on designing and building the right infrastructure to cope with and solve these issues, but before a project is inaugurated or even before construction can begin, there are a myriad elements that must come together to make the system work. Innovations such as Building Information Modelling (BIM) are simplifying the processes involved in developing and designing projects, while project managers and developers are increasingly factoring in numerous other elements into their project design.

“But to whom do these choices and options and decisions finally matter?” Armitt asked. “First the customer or consumer, then the owner or client, then the financier, then the operator, the maintainer, and lastly the designer, the contractor and their suppliers.”

Each decision made by one group will inevitably affect the others in the development pyramid, and there needs to be better cooperation to meet the challenges facing the infrastructure industry. But Armitt says there is one group in particular that especially needs to be included in the considerations throughout the life of a project.

“If you’re going to avoid long-term battles, that consideration must involve the public,” Armitt says. “If many people in a town want a bypass, you can guarantee there will be many who don’t. Do you ignore them, do you press on, or do you engage with them from the outset?”

Armitt acknowledges that engagement is not always easy, and efforts to explain a project can often be turned around to bolster the arguments of those against a project, as happened with an opinion piece he wrote in support of High Speed 2, which was used by critics to argue that the project would result in additional costs to Britain’s regional rail network.

“But equally, don’t assume that the public are going to automatically accept the media headlines,” he says. “Given the opportunity to understand and debate, they are open and will generally apply common sense.”

He says he saw the impact of open dialogue while attending the public consultations held during the NIC’s development of the National Infrastructure Assessment, which was released in July.

“By attending a couple of those, what I found very interesting was how over a couple of hours individuals could be much better informed about the issue and choices, how their initial options would change, and how important the concept of fairness is in the public mind and how that can influence their approach to sharing the cost, or even paying more,” he said. “You have to personalise issues so people can relate to them. Large-scale economic figures are meaningless. Infrastructure is not for engineers. It is by engineers for the benefit of the general population.”

He pointed to Thomas Telford, “the most prolific of civil engineers in the late 18th and early 19th century” and the first president of Britain’s Institution of Civil Engineers, as an example of what is possible when collaboration is done right.

“In 1800 he was asked by the government to come up with proposals to improve the communication and economic opportunities in the Highlands of Scotland, which were underdeveloped and suffering some social unrest due to the land clearance programme for sheep farming,” Armitt said. “In three months, without any of the technological benefit of the systems we have today, he carried out a survey and then drew up proposals for hundreds of miles of roads, bridges, ports, and harbours.

“Telford collaborated with politicians, land owners, investors and businesses, whoever was necessary to build his bold plans. The results were transformational, described as his greatest achievement, and of course, much still stands in Scotland and is effective today.

“Of course, in 1800 the general public would not have been consulted. But today’s democracy is different and we cannot behave like Victorian promoters and engineers, tempting as that may be.”

He also stressed the need for an honest assessment of the cost of a project at the outset, instead of initially offering a low estimate and allowing costs to balloon throughout the period of construction.

“It is eventually the public’s money, which they are going to pay either through taxes or as the consumer of the services,” he said. “There is of course the cynical view that if scheme promoters were honest about the likely outturn cost of their schemes at the beginning then they would never get the go-ahead. But equally we damage the public image of our industry if projects regularly cost a lot more than the estimate made public when the scheme was given the go-ahead.”