New York City Transit (NYCT), Thales and Piper Networks have demonstrated Ultra-Wide Band, a wireless technology, which is offering a quick and less expensive way of installing CBTC on metro lines. However, as William Vantuono reports, the sudden departure of a key player at NYCT threatens to hamper development. 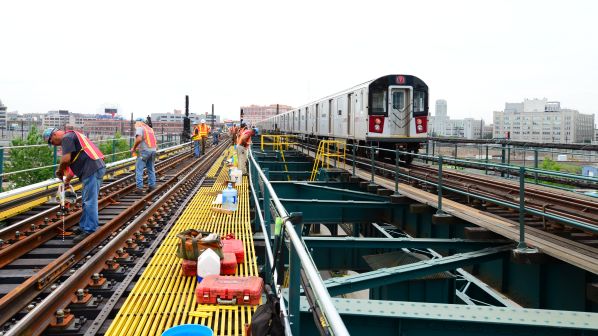 ONE of the final duties that former New York City Transit (NYCT) vice-president, network and resignalling, Mr Pete Tomlin, discharged before he left the agency was to demonstrate an innovative piece of new technology: Ultra-Wide Band (UWB), a wireless technology that offers faster and less-expensive installation of modern communications-based train control (CBTC) by eliminating much of the onboard and wayside equipment traditionally required for advanced-technology signalling.

On January 23, only hours after the resignation of NYCT president, Mr Andy Byford, Tomlin collaborated with suppliers Thales and Piper Networks in an impressive public demonstration of UWB. Later that day, the man who has worked closely with fellow Briton Byford to modernise the Toronto Transit Commission, London Underground and NYCT metros, submitted his own resignation. How quickly NYCT’s parent organisation Metropolitan Transportation Authority (MTA) recovers from the double-loss of Tomlin and Byford (affectionately dubbed the “Train Daddy”) remains to be seen.

NYCT’s UWB proof-of-concept was the culmination of a pilot programme on the Flushing (7) Line that came together in only nine months, thanks to Tomlin’s expertise and that of Thales, Piper Networks and Mr Mark Dowd, MTA’s chief innovation officer. UWB traces its roots to the MTA’s Genius Transit Challenge project, launched in 2017, which challenged leading companies from around the world to improve metro signalling, capacity and communications for the future.

In March 2019, NYCT awarded two contracts: one to Thales and Piper for a UWB-based train control system pilot project on the Flushing Line; and the other to Siemens and Humatics for a UWB pilot on the Canarsie (L) Line. The pilot’s scope involved preparing UWB for safety certification. It consisted of nine months of testing and collecting 2500 hours of operational data. An automated data upload facility at NYCT’s Corona Yard enabled cloud-based processing of all collected sensor data from the line that can be compared with data from the CBTC system and a LiDAR-based “ground truth” digital map.

“All of these features will contribute to faster system deployment and more reliable service with fewer delays for passengers,”

The Flushing Line demonstration took place on the centre express track between 61 Street-Woodside and 40th Street stations. “It showed the potential of an even more precise positioning system, UWB, to improve system performance and recovery,” NYCT noted. “The pilot proved it could also help accelerate the implementation of CBTC.”

UWB technology is installed on the wayside rather than directly on the track-bed, making it considerably easier for NYCT personnel to maintain in the long term and reduce delays stemming from malfunctioning track-borne equipment.

The key advantages and features of UWB are:

“All of these features will contribute to faster system deployment and more reliable service with fewer delays for passengers,” NYCT notes.

“We took an exciting step in safety certifying Piper’s Ultra-Wideband technology for MTA.”

“Thanks to this partnership with NYCT, we’re delivering cutting-edge technology as we test the next generation of train positioning,” says Mr Dominique Gaiardo, Thales vice-president and managing director for urban rail signalling. “Thales has integrated modern onboard sensors with a UWB network to create an enhanced next-generation positioning system for our CBTC digital signalling architecture. The new system has higher accuracy, resilience and availability, and is quicker to deploy than current-generation products.”

“We took an exciting step in safety certifying Piper’s Ultra-Wideband technology for MTA, and we’re looking forward to rolling out this technology across other subway lines as part of the Fast Forward programme,” says Mr Robert Hanczor, CEO of Piper Networks.

NYCT says it will take the lessons learned from CBTC implementation on the Flushing Line and incorporate industry best practices to improve and expedite future implementation on other subway line corridors, including better costing estimates, formalised personnel structure and responsibilities, enhanced project and contractor monitoring, more frequent surveys and enhanced attention on subway car interfacing. NYCT says it has created a new database to capture cross-discipline feedback and information from CBTC projects to better-track such valuable information to help improve future CBTC processes.

All this may be a tall order for NYCT following the loss of Tomlin and Byford. High-tech projects such as UWB require innovative suppliers like Thales, Piper, Siemens and Humatics, skilled engineering consultants like Parsons Transportation Group and others, and NYCT’s equally skilled and dedicated workers. But they also require strong, focused leadership at the agency level, and one or more “champions” who can get the job done and provide motivation and guidance. That’s what NYCT had in Tomlin and Byford. Whether the agency can pick up the pieces and regroup remains to be seen.