Italy is planning significant investment in rail over the next five years as it plots its recovery from the Covid-19 pandemic. David Burroughs and Marco Chiandoni explain what is included in the plans. 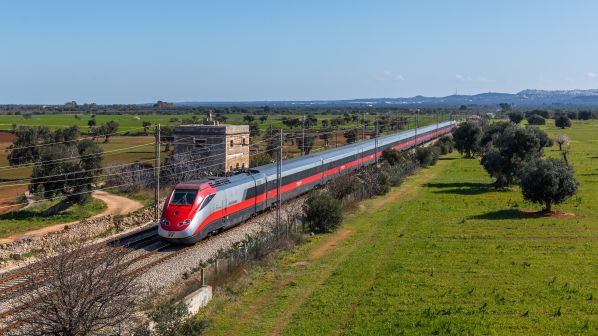 THE Covid-19 pandemic hit the Italian economy harder than many of its European neighbours, with Italy’s GDP dropping 8.9% compared with the average European Union (EU) decrease of 6.2%. The country is still suffering one of the worst death tolls in Europe.

In response to the economic carnage reaped by the pandemic, the EU launched the Next Generation EU (NGEU) programme of reforms and investments which aims to encourage economic recovery while speeding up an environmental and digital transition, improving on-the-job training for workers with a view of reducing territorial, generational and gender gaps. Italy is the first recipient of the NGEU’s two principal levers: the Recovery and Resilience Fund (RRF) and Recovery Assistance for Cohesion and the Territories of Europe (React-EU).

To receive the funding, the EU member states must present a reform and investment package, the National Recovery and Resilience Plan (PNRR), which meets six missions:
1. digitalisation, innovation, competitiveness, culture and tourism
2. green revolution and ecological transition
3. infrastructure for sustainable mobility
4. education and research
5. cohesion and inclusion, and
6. health.

Italy’s allocation from the RRF is €191.5bn, which must be invested between 2021 and 2026. The funding is made up of €68.9bn in grants and €122.6bn as loans with 40% of the total set to be invested in the south of the country to achieve the territorial cohesion objectives.

Italy will invest €32.1bn in sustainable transport, mostly through Mission 3, to integrate more regions into the high-speed rail network, complete the rail freight corridors, and boost sustainable local transport through the extension of cycle lanes, metros, light rail and zero-emission buses. This includes the construction of electric charging stations across the country and hydrogen refuelling points for road and rail transport. Out of the sustainable mobility funding, rail related investments amount to €29.4bn.

Mission three is divided into two components. The first component aims to develop the Italian rail network by completing the main high-speed and high-capacity lines both in the north and the south of the country, completing the TEN-T core network corridors and integrating them with the regional rail network, enhancing the safety and efficiency of the entire rail network, and strengthening connections to key towns and cities, including modernising several major stations.

The second component sets a number of reforms to make intermodality and integrated logistics more competitive and to simplify the implementation of projects in Italian ports through the updating of port planning and the competitive allocation of concessions.

The plan aims to support the modal shift from road, which accounts for the greatest share of transport’s greenhouse gas emissions. The investments in rail include multiple individual projects, which are combined into eight programmes:

Specifically, the plan envisages a €3.6bn investment on the Brescia - Verona - Padua line and a €3.97bn investment on the Liguria - Alps line, together with an enhanced key connection to the new Brenner base tunnel. The RRF will add €3bn to the €10bn that Italy intends to devote to strengthening stations and key national links.

A €4.8bn investment on the Naples - Bari/Palermo axis will also allow the completion of the Scandinavia - Mediterranean freight corridor, facilitating connections with the important port of Gioia Tauro and anchor Puglia and Calabria into the existing high-speed network between Naples and Milan/Venice/Turin.

Work to improve rail freight and passenger rail links to the south include the completion of the Naples - Bari high-speed/high-capacity line, which is divided into several sub-projects:

The PNRR envisages installing ERTMS Level 2 on approximately 3400km of line at a cost of €3bn, including 1377km in 2022-2024 and another 2023km in 2025-26. The work foresees the decommissioning of Italy’s existing legacy SCMT signalling system and the progressive equipping of 5000 vehicles with ERTMS.

RFI also issued a tender worth €757.48m for civil works to replace level crossings in 14 regions across the country last month. The works are worth €715.58m, the executive design €41.9m and the safety charges €34.2m. The tender includes 23 lots in Piedmont, Liguria, Lombardy, Veneto, Emilia Romagna, Tuscany, Umbria, Lazio, Marche, Campania, Apulia, Molise, Calabria and Sicily. The most expensive lots are in Sicily, with one valued at €72.6m and another at €66.8m.

Italian Rail Network (RFI) is already pushing ahead with the PNRR projects as it aims to equip the entire 16,800km main line network with ERTMS by 2036.

As part of the plans to complete high-speed lines in the north to improve connections with neighbouring countries, Italy will continue with construction of the Brescia - Verona line to extend the high-speed/high-capacity system along the horizontal Turin - Venice axis as part of the TEN-T Mediterranean Corridor that connects the Iberian Peninsula with the Ukrainian border.

The first functional lot, Brescia - Verona East, excluding Verona west junction, involves the construction of a new 47.6km high-speed/high-capacity line in the Lombardy and Veneto regions. The second lot involves quadrupling the 10.7km line from Brescia station to Brescia east junction by 2026 in the municipalities of Brescia, Rezzato and Mazzano to improve both the high-speed and conventional lines.

The plan also envisages reforms and investments to boost regional lines. The regions will be provided with financial incentives to invite tenders for public service contracts to operate regional lines. Some €3bn will be invested in regional railways in the south, notably in stations and electrification. Complementary investments will also be made in zero-emission traction including electrification and hydrogen, including purchasing trains and installing nine hydrogen refuelling stations.

RFI and the Italian government are currently finalising the 2022-26 Planning Agreement, which includes e109.2bn in funding from various sources including the recovery, complementary, national and EU funds. Another €54.5bn is needed to fund the entire plan.

Minister of infrastructure and sustainable mobility, Mr Enrico Giovannini, presented the “Strategic paper on railway mobility” in December, a list of feasibility studies for 52 new interventions. This includes 31 feasibility designs that have already been started after being included in the PNRR.

Italy’s allocation to the rail sector from the NGEU is comparatively much higher than neighbouring EU countries - Germany is allocating just €682m and France €5bn. This funding should go a long way to completing its infrastructure contributions to the Single European Railway Area and achieve its objectives of promoting modal shift.