Austin has launched Project Connect, a $US 9.6bn plan to build two light rail lines, a BRT line which could be converted to light rail, and a second commuter rail line. David Briginshaw reports on this ambitious scheme. 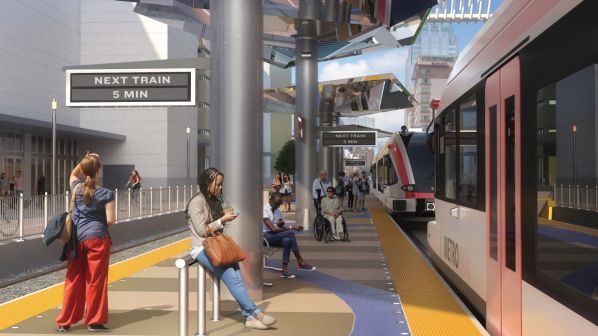 THE state capital of Texas, Austin, is the 11th largest city in the United States with a population of 2 million. The region is growing rapidly with 4500 people arriving every month and the population is forecast to double by 2040.

Capital Metropolitan Transportation Authority (Capital Metro), which operates the city’s bus network and commuter rail line, and is responsible for developing public transport in the area, says the road network will not be able to expand fast enough to cater for the increased demand. “Like other big cities, we need a strong public transit system which accommodates growth and supports our quality of life,” Capital Metro says.

“That’s how we can protect what we love about Austin and what makes it a great place to live.”

The $US 9.6bn Project Connect plan is designed to cater for this growth by investing heavily in light rail, commuter rail and buses, rather than building more roads.

“We started Project Connect about three years ago by looking at potential routes and ridership,” Mr David Couch, Project Connect’s programme director, told IRJ on April 15. “We were initially looking at bus rapid transit (BRT) and light rail. We carried out a very detailed analysis and came to the conclusion that we should use light rail for the principle high-capacity lines, with a network of MetroRapid express bus routes running at a 10-minute frequency, together with a total upgrade of the fares system.”

It was originally planned to approve the overall system and potential investment programme this month with a view to holding a referendum on the project in November. However, the coronavirus pandemic has cast doubt over the timetable. “Our primary focus at present is providing essential bus services in the Austin area,” Couch says. “We are still moving forward with Project Connect, but not at the same schedule. We are working from home to progress different portions of the system and we plan to hold a virtual open house in May using the Project Connect website. People will be able to see what we would have shown them in reality and make comments. This will allow us to make an overall response. We still hope to make the referendum in November.” If this is successful, the project could be launched in 2021.

“We started Project Connect about three years ago by looking at potential routes and ridership.”

Austin’s first foray into rail transit happened a decade ago when it launched a commuter rail service - the Red Line - on an existing freight railway linking a new Downtown station in the city centre with Leander to the northwest.

The Red Line is 51.5km long with nine stations and is operated by a fleet of 10 Stadler GTW DMUs. It is already over capacity at peak times and ridership is continuing to grow.

Work started in March 2019 on a $US 30.7m project to expand the original single-platform Downtown station to three tracks. The objective is to create a public plaza that ties together Downtown station, the adjacent Convention Centre and surrounding hotels and businesses. The new Downtown station is completed in spring 2021. Incidentally, Capital Metro is in the final stage of testing Positive Train Control (PTC) on the Red Line.

Plans include adding a passing loop and new station on the northern section of the Red Line. This will facilitate an increase in train frequency during peak periods from 20 to 15 minutes. Any further improvements to frequency would require additional track doubling.

The Red Line carries about 2600 passengers per day and by 2025 it is expected to attract nearly four times this number.

The initial 43km service would run from Downtown via Plaza Saltillo on the Red Line northeast to Manor, with a potential extension to Elgin. The Green Line would serve four new stations initially at East Austin, Colony Park,
the Wildhorse Development and Manor.

Between six to eight trains will be needed to operate the Green Line, depending on how many phases of the project are completed.

Two new light rail lines - the Orange and Blue lines - are at the heart of Project Connect, plus the Gold Line which will start out as a bus rapid transit (BRT) line with potential for conversion to light rail operation in the future.

The Orange Line will be 32km long with 21 stations. The north-south line will run from North Lemar Transit Centre, along the North Lamar/ Guadalupe corridor, via the University of Texas campus, through the city centre, to Lady Bird Lake and along South Congress to Stassney Lane. LRVs will connect with Metrorapid bus route 801 at North Lamar transit Centre to reach Tech Ridge in the north and at Stassney to reach Slaughter in the south. These bus links will be a precursor to extending the Orange Line to Tech Ridge and Slaughter in the future.

The 24km Blue Line will have 20 stations and will run from Austin-Bergstrom International Airport along East Riverside Drive in the southeast, across Lady Bird Lake to Downtown station and then along 4th Street to Republic Square. It will then head north and share track with the Orange Line to North Lemar Transit Centre.

LRVs on each line will run at 10-minute headways. Capital Metro says the LRT starter system could require as few as 14-18 LRVs to maintain this frequency. However, due to the high expected ridership on the two lines, between 24 and 28 LRVs may be warranted to meet peak service demand. By 2040, daily ridership on the Orange and Blue lines is expected to exceed 68,000.

“Dedicated transit-ways will be provided from intersection to intersection, with priority for LRVs at intersections and queue jumping of other traffic,” Couch says.

An underground section is planned in the city centre with stations at Downtown/ Convention Centre and Republic Square, and possibly one or two more underground stations such as Government Centre.

Downtown/Convention Centre station will be the hub of the network and will be served by the Blue Line, the Gold Line BRT and the two commuter rail lines. The cost of the tunnel is estimated at between $US 2bn and $US 2.5bn depending on the final length of the tunnel and the number of stations.

The tunnel will be used by Orange and Blue line LRVs and will cut journey times and reduce conflicts with other road users. Capital Metro says it will also future proof the network.

The Gold Line BRT will also have a dedicated transit-way. It will be 9.7km long with 10 stations and will run north from Downtown via Capitol East and the Medical School to Highland where it will connect with the Red Line. Buses will run at a five-minute frequency to achieve a daily capacity of 65,000 passengers.

Couch says they are still trying to assess the infrastructure level to which the Gold Line will be built. “We are still at the concept stage examining the pros and cons, while trying to keep the cost down,” he says. “The more segregation and preparation for light rail you have, the higher the cost.”

“We will look at different types of power supply systems, but we want to use proven technology - we don’t want to be the test bed for everything.”

To complement the rail network, seven new high-frequency Metrorapid bus routes with priority treatments are planned covering around 160km with 200 stops, plus eight new Metroexpress bus routes, as well as improvements to conventional bus services. There are currently 16 park-and-ride facilities in the Austin area and under Project Connect another 24 will be built.

The objective under Project Connect is to have a zero-emission rail and bus network. This will involve replacing Capital Metro’s 400 buses and 10 DMUs with electric vehicles. “We tested battery buses with overnight trickle charging last summer and the air-conditioning worked well in the Austin summer heat,” Couch says. “We will look at different types of power supply systems, but we want to use proven technology - we don’t want to be the test bed for everything.”

Couch says the conventional approach for rail in the United States is 25kV ac overhead electrification, but he has been looking at technologies such as Alstom’s ground power supply for light rail, batteries combined with rapid charging at stations, and power regeneration. He is also aware that the technology is developing rapidly.

In common with other US transit projects, the funding burden now falls mainly on local resources, as Couch explains. “Many years ago the funding split was 80% federal government to 20% local, but of late the federal share is now in the low 40% area leaving around 60% to be raised locally, and that is what we will be looking at in the referendum.”

The local commitment to Project Connect is expected to be around $US 5.6bn with the Federal Transit Administration’s 40% share amounting to $US 3.8bn. There are other one-time funding sources which are available such as the Capital Expansion Fund which could generate $US 60-70m.

Couch says Project Connect faces a number of challenges, such as gaining sufficient understanding and knowledge to form a team with the right governance structure. Educating the public will also be important as Austin has never had this type of transit system before.

“Having the right people with the right knowledge and getting public understanding will be key to the success of Project Connect,” Couch says. “It is a challenging project, but it will be a great benefit to Austin.”