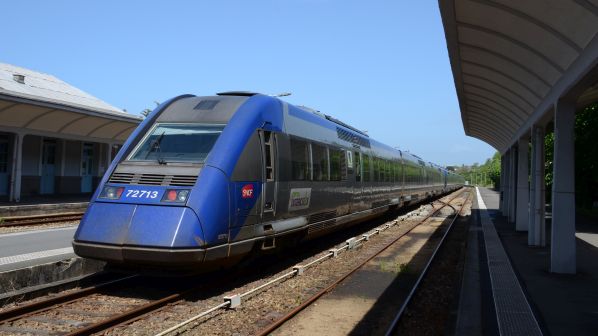 RAILCOOP was founded in November 2019 with the aim of bringing train services back to the more rural parts of France that have been abandoned by national operator French National Railways (SNCF).

The company launched a freight service between Capdenac and Toulouse in November 2021 and plans to launch a passenger service from Bordeaux to Lyon via Montluçon. However, the start of this service has been postponed twice from the initial target date of June 2021.

“Unfortunately we have not managed to complete negotiations with our banks over financing the purchase of rolling stock,” says Rail Coop chief operating officer, Ms Alexandra Debaisieux. This means that Railcoop is currently unable to schedule the refurbishment of its rolling stock fleet with its appointed contractor, ACC M of Clermont-Ferrand.

“We have signed a contract to buy nine class X 72500 DMUs - eight three-car and one two-car - from SNCF and these need to be modernised internally and their engines and transmission overhauled to improve reliability,” Debaisieux continues. “It may not be until September that we can secure all the finance necessary, but we have enough cash to allow ACC M to start work in May. They will be stripping down two trains - one three-car and one two-car - to assess the amount of work required and the cost of doing it. This will allow us to know how much money we will need to borrow. ACC M has also now decided to invest in Railcoop as a financial and technical partner. This will allow us to look at longer-term plans for our rolling stock such as replacing the engines on the DMUs.”

The scope of the interior refurbishment will depend on the amount of finance that Railcoop can secure, but Debaisieux says that it plans to provide a quiet area for business travellers and a family compartment. “We have made a decision to run an early morning train from Montluçon to Lyon, arriving around 08.30, and an evening return, because this fills a gap in the market for business travel. This is in addition to two daily return services between Lyon and Bordeaux,” Debaiseiux points out.

“We estimate that we will need to attract 1.3 million passengers a year to break even.”

Railcoop’s main market will be families and students, and it is looking to price tickets at a sufficiently low level to win passengers from buses and car sharing. “We estimate that we will need to attract 1.3 million passengers a year to break even. This should be possible as it is only 1% of all passenger traffic on this route,” Debaisieux says.

Following its launch on the Bordeaux - Lyon route, Railcoop has plans to expand throughout France, but this would be dependent on the availability of suitable rolling stock, a subject which is “critical” to new entrants to the rail market, according to Debaisieux. “We obtained our DMUs thanks to help from the Auvergne-Rhône-Alpes region, through which our new service will run, which had withdrawn some of its X 72500 DMUs. These are particularly suited to the Bordeaux - Lyon route which involves several reversals. For other routes, withdrawn locomotive-hauled Corail stock would be ideal and SNCF itself is using such trains for its new Ouigo Train Classique service. However, we believe that SNCF will not offer Corail stock for sale because it contains asbestos. We cannot understand this contradiction.”

SNCF Voyageurs is planning to launch more conventional services under the Ouigo Train Classique brand if the concept is successful, but this is not a problem for Railcoop, Debasieux believes. “We have targeted routes which do not have direct inter-city services at present,” he says. “If SNCF chooses to serve these routes we will be happy that they are restoring such services.”

The first postponement of the launch of Railcoop’s Bordeaux - Lyon service was due to difficulties in obtaining train paths from infrastructure manager SNCF Network. Debaisieux reports that this has been resolved now, “but it is a thorny problem linked to the state of the infrastructure and the way it is managed.

“The Bordeaux - Lyon service will operate over several stretches of single track and these may be close to saturation because of decisions on which passing loops are open, and for how long for each day,” she says. “Our original plans for Bordeaux - Lyon included an overnight train, but this was impossible to organise as so many stretches are closed at night. Railcoop is keen on seeing train services returning to rural areas and we are keeping a close eye on this situation.”

On the important issue of ticket retailing, Debaisieux says that Railcoop plans to sell directly to the public, offering its own products and through journeys with other operators, and offering their tickets as well. “We intend to install ticketing facilities at stations on the route during 2022, well in advance of the service launch,” she adds.

Railcoop currently has 36 staff, of which half a dozen are working on the new passenger service, eight or nine on freight operations between Capdenac and Toulouse, and the remainder providing support for both services in areas such as rolling stock and safety. “We will need about 100 staff in order to launch the passenger service,” Debaisieux says. “They will mostly be undertaking a wider variety of tasks than SNCF staff – a driver will be trained to fix minor issues on rolling stock.”

“There has been a small amount of criticism from one union which accused us of providing unfair competition,” Debaisieux notes. “This is surprising as we are operating services where SNCF is not active and we are operating as a non-profit organisation where all shareholders have a say. I think most people understand that.”

She points out that Railcoop is already working closely with subsidiaries of the incumbent state operator: Captrain France undertakes shunting of freight service at Toulouse Saint Jory yard and Fret SNCF transports timber trains from Saint Jory to the end customer, a paper manufacturer. Such cooperation will only grow when Rail Coop finally gets hold of its passenger fleet and takes a giant leap towards the start of operation.