British operator CrossCounty is deploying a new communications suite, which is set to provide onboard staff with a bespoke and easy-to-use source of live network and service information. Kevin Smith met with the developer Nexus Alpha and CrossCountry to find out how Arrakis works and how it is set to be used. 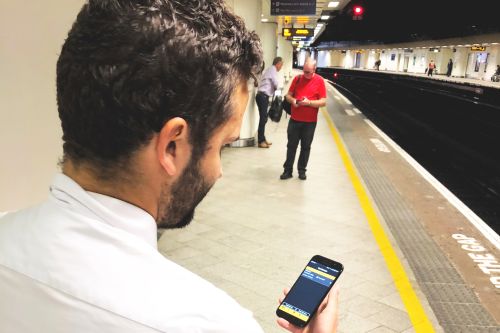 TRAIN delays are an inevitability of running any railway and are always a source of frustration for passengers. People used to arrive at stations not knowing if their train was on time. But with the growth of the internet, it is possible to better plan journeys by monitoring an operator’s social media feeds or homepages, or third-party websites which provide up-to-the minute information mined from open data platforms. Passengers can now even communicate directly with the operator via Twitter if they have a question or concern.

While the greater availability of service information goes some way to easing the pressure on the operator, particularly during severe disruption, it often presents a problem for onboard staff. Passengers now often know more about the disturbance from looking at Twitter on their smartphone than the conductor who is managing the service.

British operator CrossCountry is a strong proponent of social media. As part of its franchise extension agreement, which was confirmed in September 2016, the operator committed to a 24-hour-a-day, seven-day-a-week customer service operation through a round-the-clock Twitter presence. CrossCountry recruited 10 additional staff to meet this demand and during the severe winter weather which had a major impact on services in February and March, five people were answering Twitter queries and providing up-to-date service information from 06.00 until 22.00.

CrossCountry is unique among British franchise operators in that it runs a nationwide service, operating trains from Aberdeen in the north of Scotland to Penzance in Cornwall, and from Stansted Airport to Cardiff, covering more than 2400 route-km and over 100 stations. Yet according to Mr Matthew Reeves, duty control manager for CrossCountry, the operator remains relatively small in number; it doesn’t run any stations so its onboard staff are the front line to its customers “and key for making things work.”

In an effort to improve communication with onboard staff and better meet passenger demand for accurate and up-to-date journey information, CrossCountry has partnered with Nexus Alpha to deploy its new Arrakis communications suite.

Arrakis is Nexus Alpha’s fourth-generation communications platform and, according to CEO Mr Patrick McDougall, is a Near Horizon IT technology, which has been under development for the past 20 months.

Arrakis is a “software as a service” that is built from a series of microservices which capture, store, process and distribute information derived from a variety of Big Data sources. These include, but are not limited to, Nexus Alpha’s own systems, third-party interfaces, open data sources such as timetable and service information from infrastructure manager Network Rail (NR), the Rail Delivery Group and Transport for London as well as on-train systems, social media and video feeds.

For example, Arrakis is able to harness NR’s milestone plans which can be linked to train operating company’s (TOC) incidents and can inform staff and passengers of how long it will take to clear a particular incident. Legacy data sets compiled by Nexus Alpha over the past 10 years have also been fed into Arrakis. This includes historic movement data patterns and data associated with tens of thousands of sets of route disruption, which are analysed by geographic location and incident type. From this it is possible to determine average and median incident durations, the probable times of the day that specific incidents occur, and the likely impact of unplanned disruption. In addition, the geographic database matches routes with service disruption, validating all trains against the physical geography of the network, and automatically matching potential infrastructure problems in obscure locations with the services that may be affected.

The platform can also analyse social media activity, including the use of emojis, which McDougall says can help to interpret sarcastic comments. He adds that machine learning is particularly useful in this process and that social media monitoring can help to predict incidents before formal reporting has taken place.

Deployment with CrossCountry began this summer through the rollout of Arrakis on desktop browers or apps, or handheld devices such as smartphones or tablets used by onboard staff via android or iOS. CrossCountry’s Arrakis application supports a live feed from Darwin, Britain’s train running information engine, which provides real-time arrival and departure predictions, platform numbers, delay estimates, schedule changes and cancellations; rainbow boards, which offer a network and route performance overview; and CSL2 status, which provides information on what is happening on services operated by neighbouring TOCs.

Critically, by using real-time analytics to identify data correlations and identify patterns and trends, Arrakis is able to tailor information to a specific conductor and provide information relevant to the service on which they are working with push notifications available to inform staff immediately of what is going on so they might take appropriate action.

For example, if a conductor is working on a Birmingham - Plymouth service, the app will only provide information on network problems affecting the journey from Birmingham onwards. It will still provide information about services in Cornwall as this is relevant for people travelling beyond Plymouth. It will also provide updates on the situation at Bristol Parkway, which is a key interchange for services to London and South Wales. The conductor is able to look at a certain train and receive alerts if there is a problem. At this point, the conductor can say to passengers that it might better to stay on the train until Bristol Temple Meads and continue their journey from there.

“One of the biggest complaints that we have from our crew is that in some respects we give them too much information, especially for a TOC like us because we interface with pretty much everyone else,” Reeves says. “Our crews have access to a massive amount of information but actually whittling that down to what is relevant on their train is a job in itself.”

Reeves says CrossCountry will initially introduce the new system to senior train managers who already coach other members of staff, who in turn will pass on their knowledge as they become familiar with the system. This teaching process will be supplemented by training videos, although Reeves says individual train managers will be encouraged to try the system out and use it as they see fit. “We like to empower the train manager to do the right thing on a particular train,” Reeves says. “We run so many different types of train so what may work on one type of service may not work another.”

The next step for Arrakis is the introduction of a single key press reporting messaging system, which will alert control staff or a third party such as the British Transport Police of issues onboard trains, and the introduction of a flexible two-way real-time messaging service. “Our goal is to eliminate manual interventions such as phone calls and paper exercises using data, modern technology and location services,” says Nexus Alpha’s product owner, Ms Rashee Gupta.

Gupta adds that a feedback form is also available through the app to enable staff to provide feedback on service, for example if the Wi-Fi is not working, or to notify maintenance teams of issues, such as problems with a toilet.

While Arrakis will initially use obvious features, McDougall says Nexus Alpha is working with CrossCountry on “20-25” possible further data sets which could augment the initial service. He says with the system designed to be consistent and scalable, it can be tailored to the needs of all TOCs. In addition, the use of machine learning techniques will help the system to become more automated as it grows and learns, and as new data sources become available.

Indeed, while Arrakis is currently an augmented intelligence service, which provides people with data to make informed decisions, in the long term, McDougall says that actual Artificial Intelligence could play a role. “We are not looking to launch an actual AI system next week, but we are starting to launch Arrakis now with this five-year plan of development and it will be really exciting to see how things move on from here,” he says.

For Reeves, Arrakis is empowering CrossCountry staff by providing the information they need to offer a clear and consistent message to passengers, boosting their confidence and the quality of service available. It is another example of where Big Data and digital technologies are potentially changing the game for railway operators.

“I think the industry has been very slow to think about data,” Reeves says. “But now all of a sudden we are thinking of what we can do with it to work better. It is an interesting and exciting time.”