Japan’s Railway Technical Research Institute (RTRI) is studying how to mitigate the effects of aerodynamic phenomena on high-speed trains and infrastructure. Kiyoshi Nagakura, RTRI’s director and head of the Environmental Engineering Division, outlines the progress made so far. 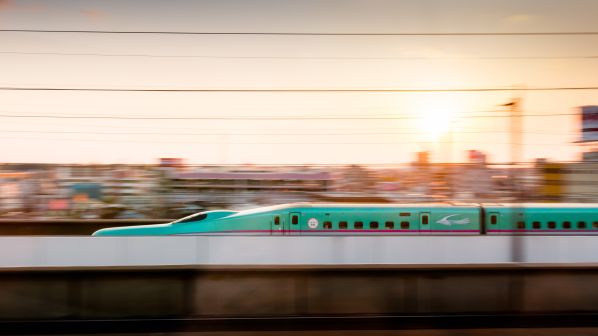 RTRI is studying how to mitigate the effects of aerodynamic phenomena on high-speed trains and infrastructure. Photo: Shutterstock

RAIL vehicles are affected by aerodynamic force and, at the same time, cause an aerodynamic phenomena along the line as a result of the mutual interaction between the vehicle and the air. The phenomena affecting a railway vehicle include aerodynamic drag, instability due to the varying aerodynamic force, variation in the aerodynamic upward force on pantographs and the potential for derailment due to high winds.

The phenomena occurring along the track include environmental issues such as aerodynamic noise, including low-frequency noise and tunnel micro-pressure waves, as well as those phenomena affecting lineside structures and people near the track such as pressure variations caused by a passing train, flying ballast, ice accumulation, and slipstream as a train passes through a station.

The higher the operating speed, the more significant these phenomena become. Therefore, solving these aerodynamic issues will become increasingly important as the maximum speed of trains is expected to increase in the future.

RTRI is carrying out research and development to clarify the mechanism which generates these phenomena, predict and evaluate them, and abate them through the use of methods such as numerical simulation, laboratory testing and vehicle tests. Our recent research has focused on an experimental approach using a wind tunnel and a moving model train rig.

Noise observed along the track of the Shinkansen can be classified into noise attributable to the solid vibrations generated by the wheels, rails and structures such as the rolling noise and the structural noise, and the aerodynamic noise attributable to the variations of vorticity around the vehicles. The acoustic power of the former increases in proportion to the square or cube of the train speed, while that of the latter increases in proportion to the power of 6 or so of the train speed. Consequently, as the train speed increases, the greater the contribution of the aerodynamic noise.

The results of the noise source analysis based on field test data show that, if the latest Shinkansen vehicle runs at more than 300km/h, the contribution of the aerodynamic noise significantly exceeds that of the rolling noise. The contribution of the aerodynamic noise sources located at the bogies is the greatest, followed by that of the current power collection system (Figure 1).

In order to control the increase in lineside noise caused by an increase in Shinkansen line speed, we are trying to understand the mechanism causing an increase in aerodynamic noise from the bogies and the current collection system so that we can develop measures to reduce the noise.

Regarding bogie aerodynamic sound, in order to accurately locate the aerodynamic sound sources and gain a deep understanding of the noise generation mechanism phenomena, we replaced the ground plates just beneath the bogie with acoustic penetration plates, which are designed to allow the sound to penetrate but prevent the air from flowing.

We also developed a method for the wind tunnel test to probe the sound sources by using a microphone array. As a result, we clarified the distribution of aerodynamic sound sources from the bogies, and discovered that the aerodynamic sound generated by the bogies could be controlled by reducing the air flow speed near the bottom surface of the vehicle or by preventing the high-speed air flow from affecting the bogies themselves. In future, based on these findings, we are going to develop reduction measures applicable to the actual vehicles.

We are studying ways to reduce the aerodynamic sound produced by the current collection system by focusing on the pantograph heads and supports which are major sources of sound.

We have also been studying the possibility for achieving a balance between aerodynamic sound reduction and aerodynamic upward force characteristics’ stability by improving the geometry of the pantograph heads, and alleviating the aerodynamic interference between the pantograph heads and the frames by improving the geometry of pantograph supports through measures such as the application of porous materials to those members whose geometries cannot be readily improved. By combining these elemental technologies and making further improvements, we will develop the reduction measures which can be applied to the actual equipment.

To build a high-speed railway in a mountainous country like Japan, several tunnels had to be constructed. Thus, the aerodynamic phenomena of the train-tunnel system are important. The wind tunnel test is an effective method for clarifying the aerodynamic phenomena. However, it is difficult to simulate the relative movements of trains and structures on the ground.

“If the latest Shinkansen vehicle runs at more than 300km/h, the contribution of the aerodynamic noise significantly exceeds that of the rolling noise.”

We have also been studying tunnel micro-pressure waves which constitute an environmental problem occurring along Shinkansen lines. When a train enters a tunnel at high speed, a compression wave is generated in the tunnel which propagates through the tunnel at sonic speed. When the compression wave reaches the exit portal, an impulsive pressure wave is emitted to the area around the tunnel portal. The emitted impulsive pressure wave, called a tunnel micro-pressure wave, can cause wayside environmental problems such as a blasting sound near the portal and the rattling of windows and doors on nearby buildings.

To mitigate the effects of tunnel micro-pressure waves, various measures have been taken such as placing a hood slightly larger than the tunnel portal at the entrance to the tunnel and extending or geometrically optimising the leading end of the train. The moving model train rig was used to design the tunnel entrance hood and the train leading end geometry.

If the train speed exceeds 320km/h, the required length of the tunnel entrance hood is extended by 30-50m, although in some cases it cannot be extended due to local circumstances. Therefore, we are promoting the development of a structure for the tunnel entrance hood which reduces the tunnel micro-pressure wave more effectively without sticking to the current specifications so that the cross-section ratio to the main tunnel is 1.4 to 1.6 and the discrete openings are located on the lateral side.

Aerodynamic phenomena problems faced by railways are diverse and their adverse effects become more significant as line speeds increase. Therefore, we believe that the solution of those aerodynamic problems will be indispensable in view of the increase in the running speed of trains anticipated in the future.

With a view to solving those issues, in 2020 we will complete equipment which is able to run a real-shaped model train on a scale of 1/20 at a maximum speed of 400km/h. By using this moving model train rig, we will be able to test more realistic phenomena by considering the separation of the flow at the leading end. Furthermore, the measurement portion of this equipment is an anechoic room which is also able to conduct the acoustic measurements. Therefore, it is expected to contribute to the progress of the study on the low-frequency aerodynamic noise caused by the train running in the open section.