A modest and quiet revolution is taking place in Australian rail freight with numerous new intermodal traffic flows from regional areas being attracted to rail. Mark Carter looks at some recent developments and key players. 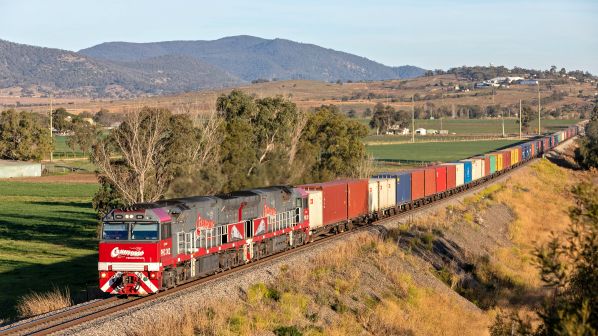 GENERAL rail freight services, as opposed to bulk freight, have steadily disappeared from Australian rail networks, but recent years have seen that trend reversed to some extent through growth in intermodal traffic, particularly transporting products from regional areas to the ports for export.

As well as the established and larger players such as Pacific National and Qube Logistics operating numerous customer-specific regional intermodal services, this shift has seen several new rail operators enter the market and, in some cases, the customer has turned rail operator.

While much of the intermodal growth has been in agricultural exports, the mining sector is also quickly adopting containerisation for a number of mineral traffic flows. Another very recent development has been a rapid increase in the use of ISO tanks for the movement of cement, in this case both inter-state and intra-state.

Fletchers International Exports (FIE) based at Dubbo, a major regional centre in western New South Wales (NSW), has a long association with rail going back some 40 years. Following the establishment of its own grain and intermodal terminal in 2009, rail freight services were hired in from private operators, but as traffic grew the company decided it needed greater control of its own destiny. In 2014 it purchased three new 3MW diesel locomotives and 62 container wagons to run its own thrice-weekly export services to Port Botany in Sydney.

When operating at full capacity the service can carry up to 30,000 TEU per annum, mainly meat, cotton and grain. The current severe drought in NSW has seen this figure drop to an average of around 16,000 TEU per annum, although FIE continues to seek new opportunities.

Earlier this year it introduced a weekly shuttle service between Dubbo and Hermidale, a distance of 215km, to service the local mining industry and connect with Sydney-bound services at Dubbo.

“Having our own dedicated train has given FIE a lot more visibility in the marketplace and helped us bring some clarity to the supply chain.”

“Having our own dedicated train has given FIE a lot more visibility in the marketplace and helped us bring some clarity to the supply chain,” Young says. “However, frequency and train size remain restricted by network constraints the closer we get to Sydney. Having to share tracks with frequent suburban passenger trains means fewer paths for freight.”

“Combined with ongoing congestion at Port Botany, this also reduces our flexibility in rearranging services in line with ship departures and arrivals when unforeseen events occur,” Young says.

Despite an increase in the total number of services through Port Botany by all operators, total TEUs on rail fell by 5% in 2018 and market share against road dropped to 17.7%, making the NSW government’s target of 28% on rail, or 930,000 TEU, by 2021 harder to achieve.

In South Australia, Bowmans Rail has filled a niche since 2003 that other operators have failed to target, in a similar vein to FIE, initially using other operators to provide rail services, but then establishing its own rail business.

Bowmans Rail is a partnership between local hay producer Balco, AGT Foods and freight logistics company Toll. The company’s initial movements were to transport compressed oaten hay from Balco’s own processing plant at Bowmans to Port Adelaide for export.

The company now moves around 40,000 TEU of local product for several customers within the state over distances of between 100km and 250km. It has also expanded its range of clients and now also moves around 20,000 TEU of processed mineral sands 580km between the processing plant in Broken Hill and Port Adelaide.

“Accessing terminals in Adelaide remains a big issue for us with larger private operators restricting access to what were previously publicly-owned terminals, making a mockery of government competition policies.”

Bowmans Rail chooses to lease its locomotive and wagon fleets. “The lease model suits us now as we don’t have the balance sheet to fund our own [rolling stock], but given the ongoing shortage of skeletal wagons we might consider financing and purchasing some in the medium term,” says Mr Scott McKay, CEO of Bowmans Rail.

McKay says there are still problems in getting greater tonnages on rail from a regulatory and infrastructure perspective. “The modal inequality between road and rail pricing on the regional and interstate networks is still the biggest barrier to moving contestable freight off road, and despite plenty of talk, there is little sign of any change on the horizon,” he says. “Accessing terminals in Adelaide remains a big issue for us with larger private operators restricting access to what were previously publicly-owned terminals, making a mockery of government competition policies.”

McKay remains optimistic though and sees that there are still opportunities to expand the business. “We are a small and growing operation and see ourselves as critical to expanding medium-haul rail competitiveness through finding consistent volumes of dense freight from the mining and agricultural industries that are at least 200km from the port,” he says.

A relative newcomer to Australia is US shortline operator Watco which provides regional open-access services in Western Australia. Since arriving in 2011, Watco has sought to establish its credentials on the back of a bulk grain contract with Western Australian grain handler CBH, moving up to 10 million tonnes a year. CBH owns its own locomotives and grain hopper wagons with Watco acting as the rail management, maintenance and operations specialist.

Watco has since won a contract to provide infrastructure trains for track owners Arc Infrastructure. In 2016, it purchased a controlling interest in Intermodal Group (IMG) which operates container port shuttles between Fremantle North Quay Rail Terminal (NQRT) and Forrestfield Container Park in Perth.

Total NQRT container rail volumes in 2017-18 were around 124,000 TEU representing a 16% rail share. Volumes have increased significantly in the last year to just under 158,000 TEU to achieve the state government’s target of 20%.

“We have worked closely with our customers to achieve record growth in container numbers through NQRT,” says Mr Grant Thompson, CEO of Watco Australia and chair of IMG. “These volumes are also the result of the state government’s encouragement through their container port rail subsidy.”

Thompson says the company has a long-term view about how Watco will grow in Australia. “We will continue to review opportunities that add to our current footprint in Australia and will go where the customer directs us or where we see there are imbalances in the supply chain,” he says.

Watco Australia will soon commence operation in Queensland with the take up of the Graincorp bulk-grain haulage contract, previously handled by Aurizon. It has purchased eight 1067mm-gauge 1.8MW locomotives from NREC, United States, and a fleet of 128 grain hoppers from China. Five additional second-hand locomotives from South Africa have also been purchased with the potential to be used on other traffic in Queensland.

“Unfortunately, our observation is that the regulatory frameworks for rail are disparate,” he says. “There still exists a multitude of state-based derivations from national law, making compliance across state lines complex. We think it is timely for the industry as a whole to have a discussion with the rail regulators focusing on improving rail’s efficiency and productivity across state lines.”

New South Wales freight operator, Crawfords Freightlines, is one of intermodal rail freight’s recent success stories. Originally started as a road haulage operation, it now has three regional terminals in NSW at Sandgate, Goulburn and most recently Werris Creek, all linked by rail to Sydney ports.

A new service to Werris Creek started in August with an annual export capacity of 21,350 TEU, but Crawfords rail manager, Mr Richard Trees, expects this to rise to 23,500 TEU by the end of the year.

Although the drought in the eastern states, especially NSW, is currently the biggest obstacle to growth, it is not the only one. “There have been a lot of missed opportunities for rail over the years, partly due to a lack of care and customer service, but also due to the tendency of larger rail operators to focus more on bulk products and ignore intermodal,” Trees says. “Intermodal may not have the higher profit margins they seek, but for us and our customers it is proving to be a cost-effective alternative to road.”

To address congestion issues into and around Sydney’s Port Botany complex, a $A 300m ($US 202m) project to upgrade and duplicate the rail link to the port is due for completion in 2023. NSW Ports has also committed
$A 120m over four years with the eventual aim of doubling annual rail capacity at Port Botany from 750,000 TEU to 1.5 million.

The imminent opening of Moorebank intermodal terminal on the Sydney fringe, with a capacity to handle 1.05 million TEU of international freight a year, and a further 500,000 TEU of interstate and regional freight, will also change the dynamics of the east coast freight market.

In Queensland, where state government subsidies have been all that has prevented decimation of regional rail freight, the Seaway Group announced plans to manage a new intermodal terminal near Toowoomba. Regular rail services to the Port of Brisbane will have an annual capacity of 20,000 TEU and commence in 2020.

Trees is optimistic about the future and says his company sees plenty of scope to win back other traffic for rail using the intermodal model around Australia. “Our new Werris Creek terminal is a good example,” he says. “After just a few months we are already having to expand the track capacity of the terminal and our agricultural clients are looking to us to see what supply chain efficiencies they can gain through greater use of rail once production lifts post drought.”

While regional intermodal traffic on its own will not be enough to turn around rail’s fortunes in Australia, there are promising signs that there is plenty more growth in this niche market.