The opening of a new 414km electrified standard gauge line between Laos and China in December 2021 has the potential to accelerate a shift to rail in countries across Southeast Asia, explains Sandeep Jain, economic affairs officer in the Transport Division at the World Bank. 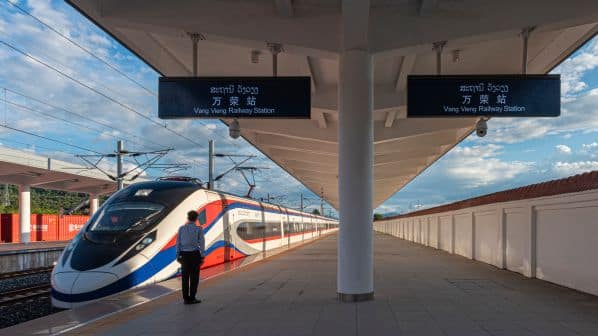 The 414km line between China and Laos opened in December 2021. Photo: Shutterstock/filmlandscape

A consistent focus on road over rail transport in recent decades means countries in Southeast Asia require extra effort to take advantage of emerging opportunities in rail. Yet the opening of the 414km standard-gauge China - Laos railway in December 2021 could spark further development in the region, potentially enabling more countries to move freight and passengers by rail on a new Trans-Asian Railway network.

Further integration of the rail networks of Southeast Asian countries will help to further this shift and transform Laos from a landlocked developing country to a land-linked country. Moreover, there is a huge potential for intermodal transport between countries in Southeast Asia and potential opportunities to ship goods by rail to Europe.

The launch of the Association for Southeast Asian Nations (Asean) freight express train between Malaysia, Thailand, and Laos in October 2022 is a significant step. The service is the result of a strategic collaboration between Malayan Railways (KTMB), the State Railway of Thailand (SRT), and Laos Railways. Journeys on the 2206km route take around 72 hours, and focus on transport of electrical and electronic goods to China.

Harnessing these emerging opportunities and improving the competitiveness of rail transport, however, will require investment to upgrade rail infrastructure and improve interoperability between Southeast Asian networks. This will include closing gaps in the network and building new terminals with facilities for efficient transhipment where there is a break of gauge.

Thailand, located centrally in Southeast Asia, is a prime example of a country that could be poised to benefit from an expanded, cross-border rail network. The country has a 67,000km highway network, compared with 4000km of railways, of which only 7% is double track. But the country has ambitious plans to ramp up railway traffic over the next seven years, including through widening most of its routes to two tracks and increasing the share of freight carried by rail from 1.5% to 5%.

Unlike road, efficient cross-border rail transport needs much closer cooperation among the stakeholders involved. Southeast Asian railways have different technical standards for infrastructure, rolling stock and operation. This can partially be attributed to different levels of rail development, but also to low volumes of cross-border traffic which meant these issues never became a matter for concern.

Apart from setting technical specifications required for agreed levels of interoperability, the railways in Southeast Asia require higher operational interoperability. This includes cooperation between border agencies to ensure that customs formalities at border crossings are streamlined and that regulatory formalities are undertaken in parallel with the operational requirements of railways. Digital interchange of data and information between stakeholders can play a pivotal role here.

Most cross-border traffic is regulated by bilateral agreements that are more than 50 years old. For example, rail traffic between Malaysia and Thailand is regulated by an agreement signed in 1954. Consignment notes used among countries are also different and there is a need to align these with common consignment notes, which would require changes in the legislative frameworks.

The various agreements made available by the Organisation for Cooperation between Railways (OSJD), which includes Agreements on International Goods Traffic by Rail (SMGS), provides for legal interoperability along international rail corridors. However, as of now, Vietnam is the only central Asian member of OSJD, while Laos is soon to join the organisation.

To support the railways in Southeast Asia, the United Nations Economic and Social Commission for Asia and Pacific (ESCAP) is now working with the Asean secretariat as well as with the countries involved to develop a strategic plan to enhance rail interoperability among Asean member states as a lever to enhance rail competitiveness.

The plan aims to ensure that rail investments create catalytic and synergetic impact as well as make transport more sustainable to support efforts to achieve the UN’s Sustainable Development Goals. It will also articulate a common vision and provide coherence to the initiatives for developing rail transport among the countries in Southeast Asia to avoid fragmented and silo-approach in rail development.

ESCAP has many years of experience of promoting international railway transport across the region. This was reaffirmed in the recently adopted Regional Action Programme on Sustainable Transport Development in Asia and the Pacific (2022-2026). An Intergovernmental Agreement on the Trans-Asian Railway network was formalised by ESCAP member states in 2006 and entered into force in 2009, and currently has 21 contracting parties in Asia.

The agreement provides for the establishment of a Working Group that will serve as a key regional platform for harnessing emerging opportunities in cross-border rail transport while discussing the implementation of the agreement.

Establishing an agency modelled on ERA is one of the major initiatives that countries in Southeast Asia can adopt to enhance rail interoperability.

The last meeting of the working group, which took place virtually in May 2021, supported 10 areas of ESCAP’s work to foster cross-border rail transport. These areas intend to further enhance the competitive advantages of rail transport among countries in the Asia-Pacific region including:

Such a strategic plan, while providing political support and coherence for the initiatives, would create synergies through partnerships as well as harness the expertise of global railway organisations.

The experience gained in Europe is particularly relevant for countries in Southeast Asia. Since its inception in 2004, the European Union Agency for Railway (ERA) has been playing a key role in setting common approaches to rail interoperability by contributing to the creation of a single European Railway Area. By monitoring and supporting national safety authorities and accident investigation authorities, ERA ensures a high level of safety on Europe’s railways. ERA is also committed to research, develop, introduce, and monitor technical specifications for interoperability. ERA also undertakes certification and authorisation of rolling stock that is valid across the European network, further supporting rail interoperability.

Establishing an agency modelled on ERA is one of the major initiatives that countries in Southeast Asia can adopt to enhance rail interoperability. This agency would draw on European experience but would also be tailored to the unique requirements of the railways in Southeast Asia.

The proposed agency will have the overarching objective of promoting rail interoperability for enhanced railway competitiveness. This could begin with one or two railway experts per country focusing on a few issues of pressing concern and could then be gradually scaled up depending on the needs of its members as international traffic picks up.

Over the long run, this agency could undertake work as agreed by its members, which could include: laying down technical specifications for interoperability to help create a single Asean rail market; creating a harmonised approach to railway safety on issues related to safety management and certification; strengthening railway research and development; and creating the process for setting mandatory technical specifications to act as references for public procurement.

The proposed agency will need to be agreed and empowered by countries to develop and implement relevant standards for greater rail interoperability.

Opening the Laos - China railway may well turn out to be a watershed event that could provide much needed momentum to boost railway transport across the region and thereby improve transport sustainability in Southeast Asia. However, the task of shifting to rail is by no means easy. But with Sustainable Development Goals (SDGs) high on the agenda, it is time for bold and transformative action. Establishing an Asean Rail Agency could be one of them.