Remainder of 2020 looks bleak for rail

In their latest study of the rail market, Alexander Herbermann and Maria Leenen from German rail market analyst SCI Verkehr explain how the Covid-19 crisis is a turning point for passenger transport in Europe as the prospects for rail competition look bleak. 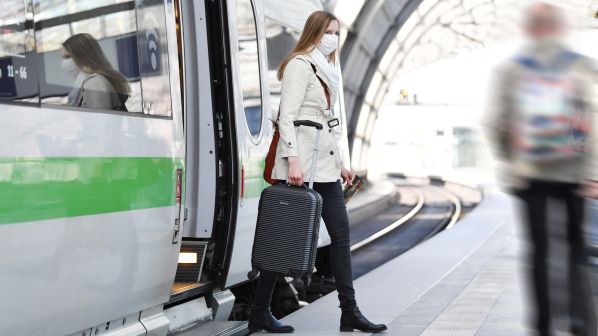 Even in SCI’s most optimistic scenario, passenger numbers would not return to pre-crisis levels before the end of 2021, compared with beyond 2025 in the worst-case scenario. Photo: Deutsche Bahn AG/Oliver Lang

PASSENGER rail transport was one of the first sectors to be hit by the full force of the coronavirus pandemic and the associated lockdowns. Demand plummeted dramatically in March. While Sweden experienced a 40%decline in public transport usage with only minor restrictions, demand in particularly badly affected countries, such as Italy and France, fell by over 90%. With increasing easing of restrictions, passengers have been returning since May, but still at a low level.

In the lockdowns return scenario, SCI assumes a second wave with renewed lockdowns in autumn 2020, with passenger numbers plummeting again - albeit not as sharply as at the beginning of this crisis, since new rules of behaviour, such as wearing face masks, have been practised and lockdowns are more regionally pronounced.

Transport performance for 2020 as a whole is 40% below the level of 2019. A vaccine or medication to combat Covid-19 is expected in all scenarios by mid-2021. However, demand in this probable lockdowns return scenario only increases slowly even after this and does not return to pre-crisis levels in continental Europe as a whole until 2024.

Although most people will return to their old travel behaviour, there will be a shift in the modal split in favour of cars and, for shorter distances, bicycles, which are the preferred mode of transport during the crisis. Demand peaks will be lower for commuter transport, as more employees will work from home for at least a few days. Long-distance passenger demand will be slowed down by the absence of business travellers, as meetings are more often held digitally.

In the disrupted markets scenario, the pandemic takes a similar course, but the economy is hit harder, there are many company insolvencies and unemployment rises by 30-40% in 2020 compared with 2019. During the crisis, countries have become heavily indebted, rail investment is being cut back and infrastructure projects are being cancelled. Services operating under PSO contracts will be reduced as countries and regions also cut operating funds.

In this pessimistic scenario, SCI Verkehr also assumes that far more people will change their travel behaviour in the long-term at the expense of rail. The longer the crisis lasts, and the more people become accustomed to driving or cycling, the more likely this scenario will happen. A weak economy and high unemployment will further slowdown the recovery of mobility. Under these circumstances, rail transport performance will not reach pre-crisis levels by 2025.

Although most people will return to their old travel behaviour, there will be a shift in the modal split in favour of cars and, for shorter distances, bicycles.

In the rapid recovery scenario, SCI Verkehr expects a fast return to pre-crisis traffic levels by the end of 2021. The prerequisite for this is that further waves of infection and shutdowns are prevented, and the pandemic is defeated in 2021. People will therefore quickly return to their old travel habits. With a decline of 50%, however, passenger transport will be heavily affected by the crisis in 2020 even in this optimistic scenario.

For the period up to 2025, SCI Verkehr assumes that the European economy will recover rapidly. Individual countries as well as the European Union (EU) will use the crisis, and subsequent economic stimulus packages, to strengthen the EU’s Green Deal and will intensify rail investment as the environmentally-friendly mode of transport. The struggling airline industry gives up market share in favour of long-distance and international rail transport. By 2025, transport performance will reach the level expected before the crisis.

The Covid-19 crisis hits passenger transport operators hard in all three scenarios. While demand has collapsed dramatically, many operators have reduced their services but not all to the same extent. On the one hand, passenger rail transport ensures the basic supply of mobility in many regions, and on the other hand, the capacity utilisation of trains needs to remain low so that passengers can keep their distance and the spread of the coronavirus can be slowed down. As a result, falling ticket revenues continue to be offset by high costs, putting a strain on company liquidity. However, the consequences of the crisis differ depending on the type of operator.

The largest operators in Europe are the state-owned incumbent railways, which are also market leaders in their domestic markets with high shares even in competitive markets such as Germany. State railways are also active in other European countries via subsidiaries, such as Arriva, owned by German Rail (DB), and Keolis, a subsidiary of French National Railways (SNCF). Although integrated railways such as DB or Italian State Railways (FS) in particular are generally better able to absorb revenue losses in passenger transport, their freight and infrastructure divisions are also reporting losses in these challenging times.

SCI Verkehr expects national governments to support their transport companies, taking into account European subsidy regulations. Germany, for example, plans to increase DB’s equity capital by billions of euros to compensate for 80% of the losses of €11bn-€13.5bn expected in total as a result of the crisis. However, as a consequence of the Covid-19 crisis and government support, state railways could also be forced to review their international activities.

Private open-access operators, such as NTV-Italo, Westbahn, RegioJet or Leo Express, have been the exception in continental Europe and are active in providing commercial long-distance services. Since these operators are almost exclusively dependent on ticket sale revenues, the Covid-19 crisis threatens their existence.

SCI Verkehr expects that private open-access operators will be dependent on government support, especially if demand recovers slowly. For example, in order to maintain services on the important Vienna - Salzburg route, the Austrian government promised financial support in mid-April to both Westbahn and incumbent Austrian Federal Railways (ÖBB). The train services are ordered from ÖBB and Westbahn as a PSO for the next three months under a contract worth €48.3m. In the Czech Republic, on the other hand, it was announced that state-owned Czech Railways (CD) has started talks about an entry into the open-access operator Leo Express.

SCI Verkehr expects the Covid-19 crisis to have a negative impact on the development of railway competition in Europe. Although the national open-access markets will be opened in 2021, many operators will critically review their announced expansion plans. While some plans might be postponed until demand has recovered, others will be cancelled, as the current crisis shows the high risks of the business and it becomes more difficult and expensive to finance companies and rolling stock.

Rail freight transport has been increasingly affected by the coronvairus pandemic since April with operators reporting declines of between 20% and 35%, while the transport of new automobiles has come to a complete standstill.

For the year as a whole, SCI Verkehr forecasts a 20% decline in freight traffic in continental Europe in what the analysts regard as the likely event of a renewed lock-down this autumn. In this situation, recovery to pre-crisis levels is unlikely until 2023 or 2024.

SCI Verkehr’s study, Passenger rail -current developments of the Covid-19 crisis in Europe, is available via the SCI website: www.sci.de/shop.