As it moves forward with the development of autonomous trains, Russian Railways (RZD) is looking at how these trains can be monitored. The head of NIIAS, Pavel Popov, explains how the operator is exploring ways for drivers to manage multiple trains remotely. 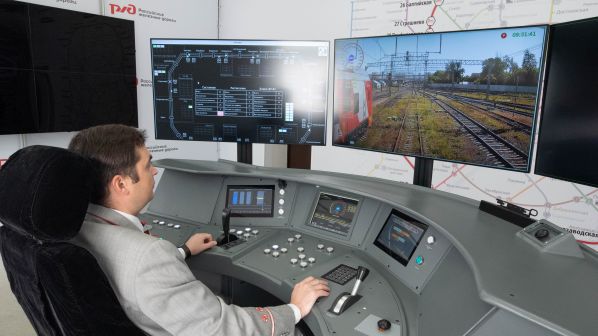 NIIAS has developed a panel that allows a driver-operator to monitor up to 10 trains, while taking control of one if needed.

A number of companies are looking to develop autonomous trains and other self-driving technologies, such as advanced driver assistance systems.
Much of this effort is focused on the development of autonomous railway vehicles. According to IEC standard 62290, a number of aspects across the network need to be taken into account to reach Grade of Automation 4 (GoA4), including:

For example, commuter trains regularly have an intercom so that the passengers can talk to the driver. But who will respond to passengers if the train is crewless? Who will direct passengers via the intercom in the event of a fire or other emergencies? Who will decide to allow the train to procced in the case of a false-positive from the obstacle detection system? Who will take action to remove obstacles identified in the train’s path?

Our solution to these questions is to add a driver-operator, who is responsible for taking control remotely during unusual situations.

This immediately raises the question of why we need an unmanned train, if the driver is simply replaced with a driver-operator? The answer is that the driver-operator can control several trains at the same time, and will only rarely intervene if required.

Based on this approach, Russian Railways (RZD) and its subsidiary NIIAS launched a programme in 2017 to explore remote monitoring and control of shunting locomotives. Our test vehicle is operated at Luzhskaya station, and is monitored from our control centre in Moscow, 700km away.

The principal task at the start of the project was to transmit video from the locomotive to a remote panel in Moscow with minimal latency and sufficient resolution and frames per second. We decided to use LTE public base stations with Mobile Edge Computing supplied by Nokia. This solution allows data to be sent directly to our servers, decreasing latency.

The 3rd Generation Partnership Project (3GPP) LTE network transmits bearer traffic according to Quality of Service (QoS), described by Class Identifiers (QCI). It is crucial to choose and adjust the correct QCI for corresponding data.

Other delays can be introduced by in-camera perception, the coding of a video stream, and the decoding and display of the video in the control centre. During remote control, it is necessary to monitor the latency of a video stream based on time synchronisation. If latency is too slow, this triggers two processes, depending on how severe the delay is: first, the driver-operator receives a warning, and secondly, the remote control is paused, bringing the vehicle to a stop by applying the service brake.
Our analysis and research showed that it is essential to provide the driver-operator with a consistent delay without sudden changes.

We use next command signals, similar to EN 50239, to control:

The control panel also includes a touch screen, which allows the driver-operator to see and adjust all internal parameters of the Train Control & Management System (TCMS), with these controls also transmitted by radio signal.

Additional information is overlaid on the video for the driver-operator, including actual and permitted speed, brake pressure, current route and the movement authority, along with the distance to the end of the route.
In addition to the forward-facing camera, the driver-operator can also view other cameras located around the locomotive.

The driver-operator is mainly responsible for reacting in case of obstacle detection and automatic braking. If an obstacle is real and hinders further movement, the operator must take steps to remove it by alerting the infrastructure manager. If the obstacle is a false positive, the operator can cancel braking via the remote panel and allow the train to continue.

The operator also manages the TCMS parameters, and can remotely control the train when operating outside the designated autonomous driving zone.

The biggest problem faced by remote drivers is the absence of haptic feedback such as vibrations, acceleration and lateral movement during operation. Additional complexity is added via the video delay, and the video makes it more difficult to estimate distances accurately.

It usually takes a driver a few weeks on average to become accustomed to the remote control system and supervise the trains without problems.

RZD took the development of remote control systems a step further with the launch of a more complex project to develop autonomous commuter trains. Here we are also considering using driver-operators to monitor and control the trains. NIIAS has developed a special control panel that allows supervision of up to 10 trains, while directly controlling one train.

Passenger ATO operation is further complicated by the need to supervise boarding and alighting and to communicate with passengers.
A driver-operator must also be responsible for managing:

An important question for us to answer is how many trains can one driver-operator safely supervise at once? Using calculations based on probabilistic assumptions, we think this should be around eight to 12 trains per operator. Undoubtedly, each driver-operator will be able to manage a larger number of trains as the technology develops.

Our current tests prove the viability of remote control. The development of digital technologies, high-speed communication technologies such as 5G, and its widespread introduction lead us to believe that soon most train operation will be autonomous with supervision from the operation control centre.