Researchers working on SNCF’s Autonomous Trains Project are developing a remote driver’s desk, which could support first and last mile and emergency operation on France’s future autonomous mainline network. Kevin Smith reports on progress following the successful completion of phase one in 2019. 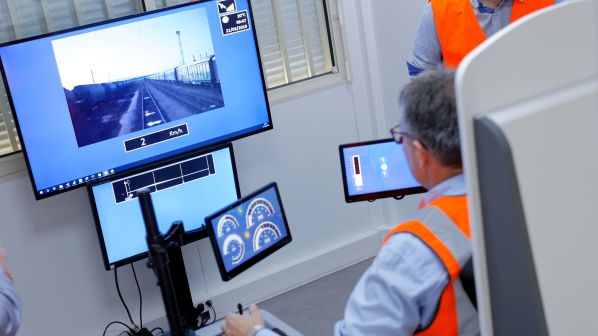 Researchers emphasised the development of a human-centred design for the human-machine interface used by the drivers during the trials.

FRENCH National Railways (SNCF) has set an ambitious target to deploy autonomous trains on the mainline network by 2025. Automation will unlock extra capacity and improve the predictability of services. However, getting there is a major undertaking.

Mainline networks are far more complex than metro systems where automation is now common. As a result, multiple research projects are underway as part of SNCF’s Autonomous Train Project to develop the individual building blocks which together will deliver ATO.

One such initiative is TC-Rail. The project aims to develop and prove a remote driving solution for locomotives that will enable a driver to control and drive a train safely from a remote site. The system will support operation in the event of a failure of the ATO system as well as provide last mile coverage for trains travelling between stations, maintenance centres and yards.

SNCF is developing and coordinating the project in partnership with French Railway Technological Research Institute (Railenium), which is leading the human factors study, safety analysis, 5G telecommunications development, and overseeing testing. Thales, Actia Telecom and France’s National Centre for Space Studies (CNES) are all involved in the telecommunications element.

“The first demonstrator focused on specifying the necessary architecture and only on traction and braking tasks.”

TC-Rail is currently working on a second demonstrator following the success of the first in mid-2019.

Dr Émilie Masson, R&D project coordinator for the Autonomous Train Programme at Railenium, told IRJ that the first demonstrator focused on specifying the necessary architecture and only on traction and braking tasks. The second series of tests, which will commence by the end of this year or in early 2021, will seek to increase the integration of tasks relating to driving, including combining telecommunications technologies into a hybrid system, as well as improving the safety, security and performance of the system.

One of the major challenges of the project is to develop a robust high-throughput communication link between the train and the ground. The link must be able to carry a large amount of data and guarantee low latency and a high quality of service in order to achieve remote driving which respects the required safety protocol. The project partners identified satellite communications and 4G LTE as the preferred telecommunications platforms for the tests. These platforms support the relay of the state of the train, a live video stream, localisation information and in-cab sounds from the locomotive while relaying the driver’s commands and camera selection.

The satcom system used in TC-Rail consists of a bidirectional Ka-band satellite link. The main subsystems are an on-the-move (OTM) antenna, a geostationary satellite, a ground segment hub positioned at CNES and a terrestrial fibre optic link to interconnect the CNES site with the remote driving site.

The OTM antenna, designed and provided by Actia Telecom, is installed on a road vehicle positioned on the freight wagon and is composed of an outdoor unit consisting of a Ka radiant panel, a Low Noise Block-converter (LNB), Antenna-Control-Units (ACU), and an inertial reference system. The indoor unit consists of a modem and local supervision.

This antenna is responsible for all communications to and from the train. The frequency plan comprises a DVB-S2 carrier with Adaptive Coding Modulation (ACM) for the forward link and three DVB-RCS2 TDMA carriers with different modulations for the return link. This kind of configuration adds resilience against meteorological events such as rain, which would reduce signal to noise ratio levels on both ends. In this case, the link would have lower data rates but is still within the ranges of the video system. The terrestrial fibre optic link allows the data to be routed through a private link, so the delay is stable at around geostationary values (600ms of round-trip time (RTT)) and no jitter is added by internet routing. Furthermore, this private link routing adds to the security aspects of the demonstrator.

In addition, a private 4G Long-Term Evolution (LTE) network solution was deployed on a 4km section of RER Line D in southern Paris where the tests took place.

For the driver, and the development of the human-machine interface (HMI) for the remote site, the researchers chose to focus on developing a human-centred design, looking at driving activity and the possibility for remote operation.

Studies of these challenges resulted in 38 recommendations, 22 of which were implemented in the first phase. This includes incorporating a dynamic track profile to address the problem of anticipation. The driver is now equipped with information about the environment such as upcoming gradients, knowledge of future elements such as signals and an awareness of their position on the track.

To provide the remote driver with the necessary information, a camera-based perception system was developed. This is supplemented with a localised feed of elements including dynamic track profile and a system to transfer data retrieved from locomotive components. The specific vision system comprises five systems with two subsystems of two cameras and two subsystems to emit infrared light both located at the front and the rear of the train along with one processing unit. Each subsystem of cameras consists of a colour camera and a Near InfraRed (NIR) camera, which can both trace colour information in signalling and increase contrast at night by combining images taken by each camera.

Of course, any telecommunications and safety critical project must take cybersecurity extremely seriously and TC-Rail is no different. Masson says the system adopts a methodology that is secure by design. Several paper studies of the robustness of the architecture were conducted while the project has adopted IP-Sec to protect global communication between the train and the remote site. However, Masson says there is a limit to what the project will cover with other elements of the Autonomous Train Project set to focus on cybersecurity issues in more depth.

“We did not develop everything to make sure that we are secure because this is simply not possible as it is very difficult and very expensive within the scope of this project,” Masson says. “Our goal is on the technical feasibility. We are considering cybersecurity but we are not implementing everything.”

The tests of the system initially focused on the vision system. Several hours of video of the line was recorded and presented to drivers. However, these images were not deemed suitable to extract all of the required information for acceleration or braking so work began on developing another vision system. At the same time, classical sub-system and integration tests were also carried out to check that the system was able to take control of the locomotive’s actuators.

With this work proving successful, the live demonstrator trials took place in April 2019 with trains operating at up to 50km/h on the 4km section of RER Line D between Villeneuve-Saint-Georges and Juvisy in southern Paris.

While the remote driver performed the acceleration and braking remotely during two live trials, Masson says they were in touch with a driver onboard the train via a telephone link. “The remote driver really took command and remotely drove the train, so it was a good experiment,” she says.

“The objective of the next experiment is to test the hybridisation of the telecommunications technology,”

However, it was not without challenges. Masson reports that while the 4G connection worked well, there were some difficulties with the satellite communications with the catenary blocking the signal and the video cutting out as a result, preventing remote driving using this technology due to safety concerns.

“With the 4G technology it was OK except for the quality of the image and the vision system,” Masson says. “This is something that we would like to enhance. However, it was possible to do this safely and securely as it is.”
The focus is now on improvements and new developments for the next series of live tests, which will take place either by the end of the year - which is SNCF’s preference - or in early 2021.

“The objective of the next experiment is to test the hybridisation of the telecommunications technology,” Masson says. “We want to retry satellite communication and different types of Satcom with a different bandwidth and a different system. We also want to retest the dedicated 4G network and add public 4G. The goal is to combine all of this in order to test operation when we have 4G available but also when it is not available, we want to effectively handover to another technology.

“This is a big change for this second experiment period to retest satcom because we are not so happy with what happened with the first phase.”
Future development work includes consideration of 5G telecom networks, which are set to become the backbone of railway communications under the FRMCS programme.

Railenium is offering a post-doctoral position to work on and optimise a possible 5G telecommunications link. Work will involve utilising some existing standards which are not yet optimised for this particular case to develop various simulations and experiments which consider how they might be applied in the future. However, this work will not be implemented within the scope of the existing project.

Current work is also looking at the possibility of introducing additional driving functions. Masson says this does not cover all elements necessary for complete remote driving but reflects the desire of the participants “to go as far as we can” in the technical development and the human factor studies to develop the work functions for the driver.

Masson adds that the different participants are currently working in parallel to give the project the best possible chance of meeting the end of 2020 deadline. She says this will continue until the point where it is necessary to bring all of the work together - at around the end of the summer - and focus minds on completing the project in 2021. All being well, the project will provide the firm foundations of a key building block for future mainline automation.