Railway industry suppliers are always looking for new ways to develop and test their products before introducing them to market. AŽD Praha has taken this to the next level by buying and operating its own line. Zdenek Chrdle and Vladimír Kampík tell David Burroughs how the company is benefiting from this novel approach. 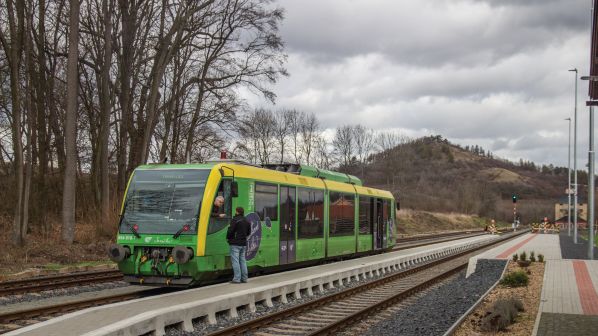 Czech signalling developer and supplier AZD Praha came up with a novel solution: to buy its own railway.
Photo Credit: David Burroughs

The railway industry has always rightly been known for its high safety standards, but meeting such high standards can slow the introduction of new technologies as they go through the stringent testing and development phases required.

This can result in difficulties testing new technologies on operational railways, as operators can be reluctant to allow the introduction of new innovative components. In order to remove this barrier, Czech signalling developer and supplier AZD Praha came up with a novel solution: to buy its own railway.

The opportunity presented itself in 2016, when infrastructure manager SZ (formerly SZDC) was looking to consolidate its network by selling under-used lines. AZD was initially interested in the 22km Dolní Bousov - Kopidlno line, says AZD European affairs director, Mr Vladimír Kampík. However, after preparing the bid documents for the line, the company decided it would also bid for the 38km Cízkovice - Obrnice line in the Ústí region.

Dubbed the “Plum Railway” due to the fruit trees that used to grow alongside its tracks, the line was put out of commission due to its slow speeds and state of disrepair, with the last passenger services running in 2007.

“We have the advantage that the train is operating every day so all the new installations are immediately proven during operation.”

After the bids for both lines were successful, AZD began upgrading them to an operational standard, including enhancing drainage along the entire trackbed of the Plum Railway, replacing rails and sleepers, modifying track geometry and installing ERTMS to increase the maximum speed along the line to 100km/h.

Following this, AZD began operating a weekend tourist service between Lovosice and Most, working with the Ústí nad Labem region. The popularity of this service, along with the improved journey times provided by the upgraded line and the new signalling technology, sparked discussions around the resumption of daily services, which eventually began at the end of 2019.

AZD is now operating 11 daily round trips along the 51km line between Litomerice and Most, which includes the Plum Railway, with another seven daily trains along the shorter Litomerice - Trebívlice section of the line.

Services are operated using three low-floor RegioSprinter units and one backup unit, which were purchased from Germany before being upgraded to meet Czech standards. This included the installation of an onboard vacuum toilet, along with air-conditioning, Wi-Fi, power sockets, and space for pushchairs, bicycles and skis. Each two-car train has capacity for 165 passengers, including 65 seated.

“We use it as a showroom and we are still continuously installing the newest technology, not only from AZD but also from our related companies,” says AZD general manager, Mr Zdenek Chrdle. “We have the advantage that the train is operating every day so all the new installations are immediately proven during operation.”

The line has three stations, at Trebenice, Trebívlice and Libceves, along with five ‘intelligent’ stops. Developed by AZD, these feature a small shelter with a signal light on top that turns off when a button is pressed by the passenger. The driver in turn looks for the light when approaching the station, stopping to pick up the passengers if the light is turned off. The stops also feature e-paper displays similar to the kind used in Kindle e-readers to display timetable information, intelligent lighting that dims when no passengers are present, and connected-fibre CCTV.

Services are controlled from a dispatch centre in Lovosice, using a fully electronic StationSWing ESA-44 interlocking. AZD has installed GSM-R along the entire line, together with ETCS Level 2 along two-thirds of the line. The remaining third will be covered with ETCS Level 1 by the end of the year as a demonstration. While the company has installed ETCS Level 2 along hundreds of kilometres of track, it is yet to build up a similar portfolio for ETCS Level 1, a gap filled with its installation on the Plum Railway.

AZD is also involved in Shift2Rail’s development of Automatic Train Operation (ATO). The line was due to host a test of ATO at Grade of Automation 2 (GoA2) this month, ahead of a presentation of the project at InnoTrans in September. However, this has since been delayed due to the Covid-19 pandemic, with the demonstration now expected to take place ahead of InnoTrans’ revised dates on April 27-30 2021. Nevertheless, the technology is installed and ready on the line, Kampík says, and work is ongoing with a goal of developing GoA3.

The ATO system aligns with the standards developed by the Unisig industrial consortium, which comprises AZD, Alstom, Bombardier, CAF, Hitachi Rail, MerMec, Siemens, and Thales as full members, while CM and Sirti are associate members.

New features were installed along the Cízkovice - Obrnice section of the line, including modern electronic GateSWing PZZ-J level crossings with LED warning lights and new telescopic barrier beams made of composite materials or aluminium.

As part of its level crossing development, AZD is involved in the C-Roads project, a Europe-wide programme to develop Cooperative Intelligent Transport Systems (C-ITS) to improve road safety. The system uses data from road vehicles to allow them to communicate with each other and the surrounding infrastructure.

The C-ITS systems will provide drivers with information on upcoming traffic and road conditions, helping to improve flow and prevent traffic jams and serious accidents. The technology will also be able to communicate with level crossings, alerting the driver that the barriers may be closing or that a train may be approaching.

AZD is also installing and testing a number of new developments not usually seen along a small rural railway, including FieldSWing SNA-100 prototype signals designed for lines with operating speeds of more than 160km/h and alternative point machines.

Maintenance along the line will be streamlined through the use of fibre-optic cables and drones. A global diagnostic system, based at Trebívlice station, will continuously monitor and evaluate key parameters and all technical installations along the line. Using a system supplied by Frauscher, a fibre-optic cable is laid along the line, which uses rail defectoscopy to detect cracks or breaks in the rail by picking up the vibrations produced by the train passing by.

“We welcome all visitors who would like to see the line in operation and see the installations, it is open to all.”

The goal is to create a system whereby the detection of a fault would trigger a drone, which would autonomously fly to the location to observe and photograph the affected rail.

The system has been tested successfully using pilots who fly the drone using GPS localisation. Autonomous flight is not yet possible due to legal restrictions. AZD is seeking a change in legislation to allow it to operate the drone autonomously over roads, but this process has been put on hold during the Covid-19 pandemic.

The system will also monitor level crossings, ETCS, public information systems, station lighting and other elements, along with the technical condition of culverts and bridges after smart sensors are installed.

The coronavirus pandemic has not affected the operation of the line itself, Kampík says, and the line continues to provide the full services prescribed under the contract with the Ústí nad Labem region.

Reopening of the line has helped to increase awareness of AZD’s brand among the general public. The company is also continuing the line’s heritage. The plum trees which gave the line its name have been replanted and their fruit is now used to produce AZD-branded Slivovice brandy. “We welcome all visitors who would like to see the line in operation and see the installations,” Chrdle says. “It is open to all.”