Stadler is a world-leading supplier of cog railway locomotives and rolling stock. Kevin Smith and Michael Boyle report on a project for the iconic Broadmoor Manitou and Pike’s Peak Cog Railway in Colorado. 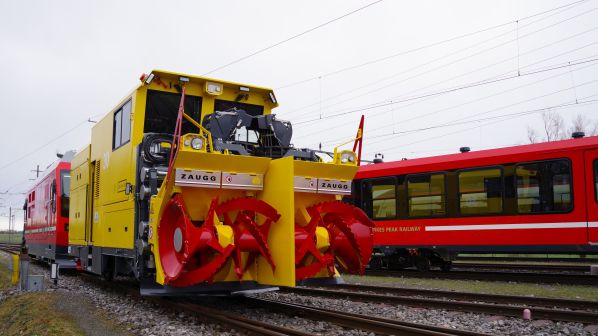 Zaugg supplied a two-axle snow clearing vehicle for the railway, which is coupled with an Hm4/4 rack and pinion locomotive built by Stadler. Photo: Michael Burger

AT more than 4300m at its peak, the 14.3km Broadmoor Manitou and Pike’s Peak Cog Railway is the world’s highest cog railway and the highest railway in North America. It carried its first passenger in 1891 and has continued to amaze tourists ever since, with sweeping views of the Rockies to the west and Colorado Springs and great plains to the east from atop “America’s Mountain.”

However, with the infrastructure and rolling stock becoming a little tired, the railway closed in 2017 due to the rising costs of operation. With its future in doubt, the owners of the railway, The Broadmoor, an exclusive resort hotel, decided after reaching a Tax Incentive Agreement with Manitou Springs, to proceed with an estimated $US 100m refurbishment programme in 2018.

Demolition of the existing infrastructure got underway in March 2019 and has progressed steadily ever since with tracklaying commencing in May 2020. Contractor Stacy and Witbeck was tasked with relaying track and replacing the existing Abt with a Strub rack system. The contractors have installed new twin tracks at the valley and peak stations, and have remodelled the depot facility. The railway is scheduled to welcome back passengers on May 1 and will host a grand reopening to coincide with the railway’s 130th anniversary on June 30.

Passengers using the service will do so onboard three new three-car rack and pinion trains operated using Hm4/4 locomotives. Stadler built the new trains at its plant in Bussnang, Switzerland, and they will complement the existing four SLM Bhm 4/8 diesel trains delivered by Swiss manufacturer SLM in the 1970s and 80s, which have been refurbished for Strub operation under the upgrade programme.

The railway is scheduled to welcome back passengers on May 1 and will host a grand reopening on June 30.

The new trains are powered by six-cylinder diesel engines supplied by Cummins and feature aluminium bodyshells in order to reduce their weight, which is a concern given the railway’s 25% gradients. Trains travel at 25km/h up the mountain but at 17.5km/h coming down. The one-way trip takes approximately 1 hour with passengers afforded a 45-minute stopover at the summit. Each train has 250 seats, including 13 fold-away seats and facilities for reduced mobility in the middle coach. Seats are also positioned at an angle on account of the steep gradient.

The large double-pane windows provide passengers with unobstructed views. However, the low ambient pressures experienced at high altitude led to a lowering of the pressure in the double pane cavity during the commissioning process to maintain the windows’ integrity. Similarly, specialist electronic equipment is used to prevent overheating in the tough operating conditions.

Stadler was selected to build the trains as the last remaining specialist supplier of cog railway vehicles for passenger transport. “Switzerland is a cog railway centre of competence, with a high density of cog rail operators and the internationally recognised cog rail specific standards of the Swiss BAV Transport Ministry,” Mr Stefan Bernsdorf, project manager told IRJ during a visit to its Erlen plant where commissioning of the rolling stock took place.

An innovative feature of the new rolling stock is the use of a specialist two-axle snow clearing vehicle built by Zaugg at its plant in Eggiwil, Switzerland, which can operate at 14km/h when coupled with the Hm4/4 locomotive.

At more than 4000m, Pike’s Peak can experience snowfall year-round with drifts of up to 6-7m commonplace. The snow clearing vehicle is powered by a 15l Cummins diesel engine and requires two operators: the driver and snow clearer. The driver controls the coupled locomotive via a remote control installed in the cab of the snowblower with the snow clearer operating the snow clearing equipment.

Two large hydraulic-driven rotary blades operate as snow-cutting reels, chopping and churning the snow into two autonomous ejection chutes, which propel the snow up to 30m away from the tracks in the desired direction. The vehicle is capable of clearing up to a 6m-wide path with capacity for up to 3800 tonnes of snow per hour. It features an anti-blocking system for large rocks and trees. There is also a height adjustable clearing plough. A unique feature helps the system to avoid snow-contaminated air from being sucked into the cooling unit with only air from inside the unit used.

Upon completion of commissioning in Erlen, the trains were transported to Basle and then via Zeebrugge to Texas, from where they completed their journey to Colorado by road. Testing commenced in early 2021 and the new rolling stock is now on track to restore the Pikes Peak Cog Railway to its former glory.