Luisa Moisio, director of research and development at RSSB, and Professor Clive Roberts, head of the School of Engineering at the University of Birmingham and director of the Birmingham Centre for Railway Research and Education (BCRRE), outline their views on the direction of post-Covid research, and their expectations for the 2022 edition of the World Congress of Railway Research (WCRR) to Kevin Smith. 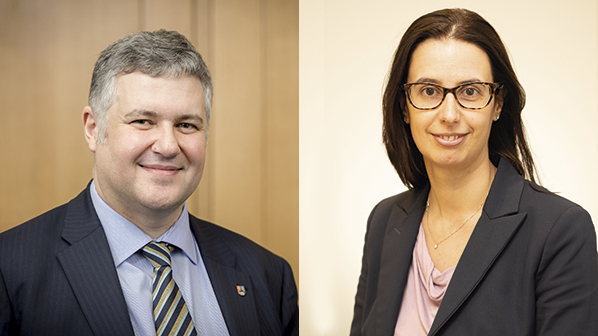 Professor Clive Roberts, head of the School of Engineering at the University of Birmingham and director of the Birmingham Centre for Railway Research and Education (BCRRE) and Luisa Moisio, director of research and development at RSSB.

BRITAIN’s strong pedigree in railway research is synonymous with the former British Rail Research Division. BR Research’s ground-breaking work covered many areas, but it is perhaps best known for vehicle dynamics, most notably the InterCity 125 HST and Advanced Passenger Train.

The slow disintegration of this arm of the national railway in the mid-1980s and its eventual sale after privatisation was a body blow to research and development for both the British and global rail sectors. British researchers continued to play an important role. But with the foundation of the UK Rail Research and Innovation Network (UKRRIN) in 2017, the country’s fractured railway research apparatus has been stitched together and is arguably returning British railway research to its influential position on the global stage.

“The pandemic has arguably changed the railway sector, with new challenges emerging that researchers must tackle.”

UKRRIN’s lead is Professor Clive Roberts, who is also head of the school of engineering at the University of Birmingham and director of the Birmingham Centre for Railway Research and Education (BCRRE). Roberts says there is a “perfect storm” in Britain of background academic capability, international suppliers, and a customer in the railway, and in key areas such as digitalisation, decarbonisation, and asset management, UKRRIN members are now able to build partnerships and collaborations and make notable contributions to improving the railway.

“We’ve always done lots of good academic research, but it’s always taken a long time to get that into the industry,” Roberts says. “There are a number of flagship projects where UKRRIN has accelerated things out of the lab and into the real world and it is beginning to make a real difference.”

Delivering outcomes is consistently underlined in Europe’s Shift2Rail research initiative. Roberts says this emphasises the shift more generally in railway research with Shift2Rail and its successor Europe’s Rail having the scale and capability to tackle the big challenges much faster than was achieved before. In contrast, UKRRIN might tackle challenges from a “point to point” approach where one academic institution works with a single company to take the work forward.

This is a point echoed by Ms Luisa Moisio, director of research and development at the Railway Safety and Standards Board (RSSB), both a UKRRIN and World Congress of Railway Research (WCRR) founding member. “There is a space for local innovation driven by local needs as well as international innovation pursued via big consortia. They are generally the ones with the money and the scale to go after those big radical changes that can transform the railways way of working.”

RSSB and the University of Birmingham, will jointly host the 2022 edition of WCRR on June 6-10 in Birmingham.

A global pandemic and national lockdowns are not conducive with fostering the close collaboration and knowledge sharing necessary for ground-breaking research. Holding the conference in person, with people in attendance for the full five days, was therefore a key objective according to Moisio, who is chairing the WCRR Organising Committee.

Moisio says the pandemic has arguably changed the railway sector, with new challenges emerging that researchers must tackle. She says this is emphasised in the theme of the event, “Reshaping our railway post pandemic: research with an impact” and in the roughly 625 abstract papers submitted for the conference, which will be whittled down by around half for the final programme. The opening plenary session will also tackle this topic.

“The changes that we are going to see around our railway in the next 10 years are mainly around digitalisation, how our railway is powered, and customer experience, specifically how passengers interact with the railway.”

Roberts says he expects research to increasingly focus on driving value for money, especially in areas such as track maintenance and on railway construction where he says there “is an awful lot to do.”

“The changes that we are going to see around our railway in the next 10 years are mainly around digitalisation, how our railway is powered, and customer experience, specifically how passengers interact with the railway,” he says.
Moisio says that in the post-Covid world funding is likely to become more of an issue. It is essential therefore to leverage private finance for research, and UKRRIN is testament to this approach. Collaboration with other industries is another theme likely to emerge in research and will be reflected in some of the WCRR papers.

Despite the difficulties of the last 18 months, Roberts says research has not stood still in the three years since WCRR 2019 in Tokyo, in fact some things have moved quite rapidly. This is apparent in the conference location and enthusiastic response to its call for papers. The University of Birmingham is now Europe’s largest university-based provider of railway research and education and is doing some commendable work to promote railway education in developing areas, notably Africa, the Middle East and East Asia. Birmingham is also home to HS2, and Moisio says work is underway for this vast infrastructure project to play a big role at the event.

“It is clearly a place that we want to bring to the attention of the international community,” she says. “It is also a chance to refocus and re-energise the sector. And that is what we are aiming to do.”