Faced with a fresh set of challenges amid the raging second wave of the coronavirus pandemic, Indian Railways is debating a possible mid-course correction of the full electrification plan launched in September 2019, as Srinand Jha reports. 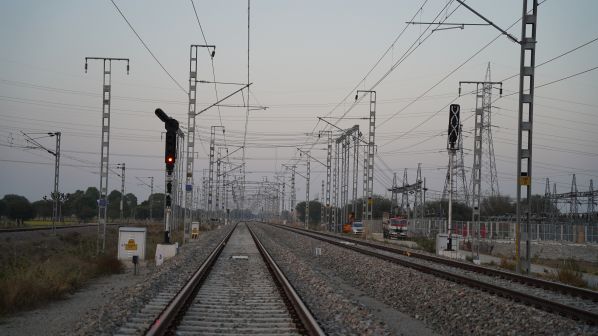 India has electrified 45,881km of its network. The government is aiming to electrify 6015km annually. Photo: Shutterstock/Thala Bhula

Approximately Rs 100bn ($US 1.4bn) has been spent on electrification works and about Rs 70bn on the purchase of electric, signalling and telecommunications components. An additional Rs 250bn has been earmarked for spending until the project’s targeted completion in December 2023. “There has come about a huge investment in capacity development, while a vendor-base has also been established,” says former Railway Board member, Mr Subodh Jain. So, why the re-think at this stage?

Since the Indian government imposed its first national lockdown in March last year, passenger train services have been curtailed with only limited services operating and no indication when the full timetable will be restored. Earlier this year, IR’s Traffic Directorate reported a 17% surplus of locomotives, both diesel and electric. “If an honest count is done, about 950 locomotives (both diesel and electric) worth about Rs 100bn are surplus,” an Indian Railways Ministry official said on condition of anonymity. “At a time when coaches, wagons and locomotives are idling, splurging huge amounts on electrification seems unjustified.”

India’s war against the Covid-19 pandemic has also revived the debate on the need to divert electrification funds to more gainful pursuits, such as tasks to improve the loading gauge, known as the Schedule of Dimensions (SoDs) on IR. SoDs on India’s rail network today remain limited because of certain civil structures like road and foot bridges and overhead catenary, especially in tunnels. IR’s recent and continuing task of carrying liquid oxygen tanks on freight trains has highlighted the need for a bigger loading gauge, as IR has been compelled to use scarce and expensive well wagons for these tanks to enable their passage.

The SoD restrictions have been one of the biggest impediments to IR’s profitability as they have prevented the movement of double stack containers. “Large scale electrification was inevitable, but an optimum mix of electric and diesel was called for and not complete electrification,” says former IR official, Mr Sudhanshu Mani – also known as the designer of the indigenously-built T-18 trains. “Further electrification must be called off at this stage and funds should be diverted to achieve more purposeful aims.”

“Full electrification was an ill-conceived idea to begin with,” says former Railway Board member, Mr R R Jaruhar. “India should have pursued the best business models of major world railways of retaining diesel for haulage of freight trains. Even at this late stage, the policy must be reviewed.”

“Full electrification was an ill-conceived idea to begin with.”

IR’s full electrification plan has always come with a catch. While state-owned production units stopped the manufacture and supply of diesel locomotives to IR three years ago, IR has continued to put into service the more expensive diesel locomotives from the Wabtec (erstwhile GE) plant at Marhoura in the eastern state of Bihar. India is committed through a 2015 Public Private Partnership (PPP) contract to purchase 1000 locomotives over a period of 10 years from the Marhoura facility. According to the agreement, 700 of these will be 3.35MW units and the remaining 300 will be 4.47MW. “We have already handed over more than 300 diesel locomotives to IR including 44 that have been delivered in the period January to April 2021,” says Wabtec India’s spokesman, Mr Sanaj Natrajan.

IR’s other and bigger worry is how best to monetise the diesel locomotives that are progressively being stored. Approximately 1000 diesel units in full working condition are reported to have been grounded so far, while around 4000 diesel locomotives that have not completed their expected life of 35 years are proposed to be taken out of service in the next two years. The cost of refurbishing 4000 locomotives for possible export to South Asian or African countries has been estimated at Rs 80bn at the rate of Rs 20m per unit. IR officials say the refurbished diesel locomotives would fetch Rs 50m apiece on the international market.

But such projections come with a catch: only a handful of countries have the same 1676mm-gauge track as India. The low demand for such locomotives is borne out by the fact that, in the last 20 years, India has only been able to sell around 1000 locomotives to countries such as Tanzania, Vietnam, Sri Lanka, Bangladesh and Pakistan. It is unlikely, therefore, that India will find a bulk buyer for so many diesel units.

“Apparently, IR is apprehensive that the sale of working diesel locomotives at cheap rates will provide material for a major political controversy.”

The proposal to convert the diesel locomotives to electric - as announced by IR in 2016 - has also come unstuck. The first prototype converted locomotive - developed by the state-owned Diesel Locomotive Works at Varanasi - failed to clear the mandatory safety and performance tests by the Lucknow-based Research Design and Standards Organisation (RDSO). Besides, at Rs 180m per locomotive, according to IR’s estimates, the conversion costs are prohibitive.

IR floated tenders in January offering the sale of diesel locomotives in working condition. However, the tenders were suddenly cancelled without any explanation. “Apparently, IR is apprehensive that the sale of working diesel locomotives at cheap rates will provide material for a major political controversy,” a senior rail consultant says. “Therefore, IR is finding it difficult to monetise these assets.”

At a time when IR is struggling to find a response to the Coronavirus-induced challenges, IR’s hugely capital-intensive electrification plan, which is being implemented at the cost of stabling thousands of diesel locomotives, is likely to come under greater public scrutiny in the coming months. Ministry sources say that India’s top auditor, The Comptroller and Auditor General of India, is appraised of the matter.