2018 was another year of milestones for the Riyadh metro project, with infrastructure taking shape, the awarding of operating contracts and the start of test running. With the first sections set to open later this year, Keith Barrow rounds up recent progress on one of the world’s largest urban rail projects. 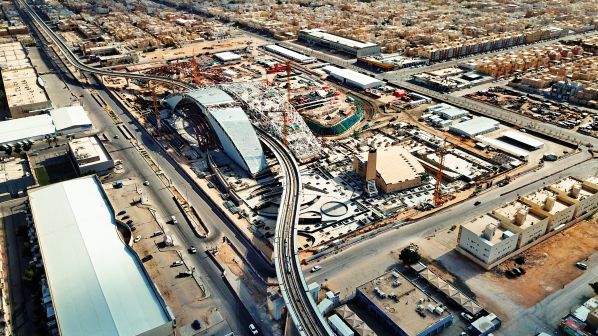 Western Station is one of four ‘iconic’ stations on the Riyadh metro network. The 110,000m2 structure includes a bus station, underground car park, a market, a mosque and a public square.

THE towering concrete columns and gleaming stations rising above the boulevards of Riyadh serve as a daily reminder to motorists on the city’s increasingly-congested roads that the way this city moves is about to be fundamentally transformed.

The opening of the first sections of the 176.7km Riyadh metro network later this year will enable many commuters to leave the car at home and soar above the traffic into the city.

The metro is part of the King Abdulaziz Project for Riyadh Public Transport, which also includes a $US 4bn investment in the creation of a 24-line bus network with a fleet of 842 buses. Together, the new rail and bus networks are expected to generate a tenfold increase in public transport trips in the Saudi capital, transforming mobility in a city whose population is forecast to grow by 2.9 million between 2010 and 2030 to 8.3 million.

In July 2013 Riyadh Development Authority (RDA) awarded three turnkey design-and-build contracts for the construction of a six-line automated metro network to three international consortia (IRJ May 2017 p32). Five-and-a-half years on, the $US 23bn project is entering the home straight. Construction of viaducts and tunnels has been completed and tracklaying was 91%-complete at the end of October with 342km of the 376 track-km network in place. Work is now underway on the installation of 954 escalators and more than 600 elevators as well as air-conditioning and fire suppression systems at the network’s 85 stations.

Trains began moving under their  own power with an inaugural test run at the depot on Line 6 (Purple Line) in April. This was soon followed by the first test run on Line 3 (Orange Line), while dynamic testing commenced on Line 2 (Red Line) in December.

In September, Prince Faisal bin Bandar, governor of Riyadh and chairman of RDA, announced the metro project was 75% complete and confirmed that winning bidders had been chosen for operations and maintenance (O&M) contracts for all six lines.

Capital Metro Company (Camco), a joint venture of RATP Dev and Saudi Public Transport Company (Saptco), has been awarded the contract for the 39km Line 1 (Blue Line) and the 25km Line 2 (Red Line).

The contract for lines 3, 4, 5, and 6 (Orange, Yellow, Green and Purple lines) is worth Riyals 10.9bn ($US 2.9bn) and was awarded to the Flow consortium, which comprises Alstom, Ansaldo STS, and Italian State Railways (FS). Alstom’s share of the contract is worth e€730m and includes maintenance of rolling stock, infrastructure and power supplies for all four lines.

KPIs in the contracts are based on global best practice in urban rail operation and maintenance and the agreements set a minimum Saudization target of 45%, with at least 55% local content for supplies and services relating to system operation. The contractors will introduce new job roles for Saudis in civil, mechanical and electrical engineering as well as vocational posts in customer service, sales, safety and security, and administration.

Both contracts run for 12 years including the mobilisation period.

In October RDA awarded the FCC-led Fast consortium a contract to build a 1.5km extension of Line 4 to serve King Khalid International Airport. The two-station extension will provide a direct link between the airport and King Abdullah Financial District.

On November 15 RDA announced the results of the naming rights auction for eight metro stations The sponsorship deals will generate Riyals 1.05bn over of the 10-year duration of the contracts, and in addition to naming rights, give sponsors advertising, signage and retail space at their chosen stations. Revenues generated by the initiative will be reinvested back into the network, helping to reduce operating costs.

The first sections of the metro are expected to open later this year, with all six lines due to be fully operational by 2021.