Road vs rail: the route to decongestion

Competing proposals to reduce heavy congestion on the route between Cardiff, Newport and Bristol in Britain have been put forward, pitting road against rail and other public transport alternatives. But as David Burroughs explains, the decision over which route to take could be more political than practical. 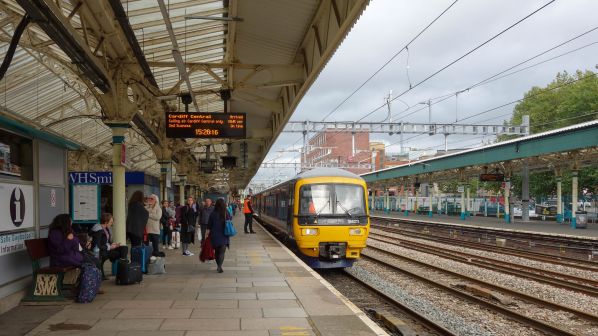 The proposed rail-based solution to improve commuting options involves the construction of three new stations either side of Newport station. Photo: Shutterstock/Michael715

DRIVING the 25km or so between Cardiff and Newport in the southeast of Wales is not recommended during peak times. Traffic on the route regularly slowed to an average speed of around 32km/h during peak periods before the Covid-19 pandemic hit, with traffic levels returning to normally high levels during the summer of 2020 between the first and second waves of the pandemic.

But while driving may be an unsatisfactory option, the public transport alternatives are less than ideal, as they are slower, more expensive and less flexible than travelling by car. Unfortunately, options put forward to solve this conundrum are caught between the British and Welsh governments’ competing visions on not only the transport options in the region, but also the powers that are devolved to the Welsh parliament.

The Welsh government’s favoured position is the development of a network of public transport services based on a rail backbone. However, powers to control the rail network are held by the British government. Conversely, British prime minister, Boris Johnson announced last year that his goal was to build a relief road, a £1.3bn project that was rejected by Welsh first minister, Mr Mark Drakeford, under Wales’ devolved powers over its road network.

Speaking in the Welsh assembly in June 2019, Drakeford said the financial uncertainty at the time meant he could not support the relief road.

“I am not satisfied that the project can be implemented within the foreseeable future, given the prolonged period of financial uncertainty we face,” he told assembly members. Drakeford went on to say that even if the project were financially viable, he still would not support it due to its environmental impact, specifically on low-lying areas forming part of the Severn estuary.

Responding to the strong views both for and against the construction of the relief road, along with a consensus on the need to address the capacity, resilience and environmental issues on the M4 highway around Newport, Drakeford announced the formation of a commission of transport experts. The commission was charged with reviewing the evidence and making recommendations to the Welsh government on alternative solutions to the problems faced on the M4 highway.

Setting out the commission’s goals, Drakeford said it would be guided by an overarching ambition to develop a high-quality, multimodal, integrated and low-carbon transport system, in the context of the major challenges of climate change and biodiversity.

The South East Wales Transport Commission, chaired by Lord Terry Burns, was launched in October 2019, and released its final report outlining a ‘Network of Alternatives’ in November 2020, with a major focus on better utilising available rail capacity on the South Wales Main Line (SWML).

Burns says the network is designed to give people and businesses new, credible transport options that do not require the use of the highway or a car, much of which can be delivered through improvements to the existing rail and road network. Newport has one of the highest car mode shares in Britain, despite nearly 30% of households not owning a car.

The commission has recommended an infrastructure package worth between £600m and £800m to construct the network, including:

To integrate the network, the commission has recommended a network policies package, which:

To encourage people to use the network, the commission recommended a behaviour change package, which emphasises:

Implementing the full range of recommendations from the commission would require between £15m and £35m in annual running costs.

The most important changes proposed for rail relate to the SWML. Between Severn Tunnel Junction and Cardiff East Junction, the four-track line is divided into two main tracks, which have a maximum speed of 145km/h, and two relief tracks, with a maximum speed of 96km/h. These are usually split between freight and passenger services, with the commission finding that the difference in speeds and separation between passenger and freight substantially limits the line’s total capacity.

Technical work undertaken by the commission found that it would be possible to increase passenger service capacity and flexibility on the line by upgrading and reconfiguring the relief tracks to effectively create a four-track electrified passenger line, nearly doubling capacity at peak times. Instead of grouping services by type, trains would be grouped by speed. The commission also recommend upgrading the relief tracks to allow 145km/h operation.

To capitalise on the new capacity provided by segregating the tracks, the commission has recommend building six new stations:

While reconfiguring the SWML and constructing additional new stations provides for a much greater range of rail services to operate, the commission says that it will initially be more efficient for some existing services to stop at the new stations instead of introducing a commuting service that would operate solely between Cardiff and Severn Tunnel Junction.

As with any major rail project, the development of the network of alternatives can only be implemented with the strong support of the Welsh and British governments.

In January, the Welsh government accepted in principle the solutions put forward by the commission. However, local elections for the Welsh parliament scheduled for May 6 mean this support is not guaranteed with the incumbent Labour Party facing a challenge from the Conservative Party, which favours the relief road option.

“For years, families and businesses have been crying out for an M4 Relief Road to tackle excessive congestion but scandalously the Welsh Labour government ignored their pleas,” Welsh shadow minister for the economy and transport, Mr Russell George, told IRJ. “A Welsh Conservative government would prioritise building a better Wales by undertaking the biggest road upgrading programme in a generation, which includes delivering an M4 Relief Road and working with the UK government to invest in and modernise our rail infrastructure. Our focus would be on Wales’ economic recovery, not more powers or new taxes.”

However, Labour says it is “firmly committed” to delivering on the Burns Commission proposals should it return to power.

“Our Welsh Labour government has accepted in principle all of the recommendations and will do all it can to make the exciting Burns vision a reality,” says Welsh minister for economy, transport and North Wales, Mr Ken Skates. “But we need the UK government to play its part. Rail infrastructure is a responsibility of the UK government and historically Wales has not had its fair share of funding that will be needed to support the rail backbone of the Burns vision. Wales has 11% of [track-km] in the UK, but has historically received only between 1-2% of rail enhancement funding.”

“For years, families and businesses have been crying out for an M4 Relief Road.”

As part of his agreement with Drakeford when the commission was launched, Burns would not be drawn on whether the road would provide a better improvement than the network proposed by the commission. But he says he believes the plan could quite easily fit Johnson’s strategy when compared with other projects around Britain, such as the Northern Powerhouse project, as well as the Union Connectivity Review (UCR), which found that devolution has resulted in a lack of attention to connectivity between the four nations comprising the United Kingdom.

“I would like to argue that this is tailor-made to fit in with his plans for connected nations and his plans for infrastructure,” Burns says.

“This is not something that is entirely within the scope of the Welsh government, as it will require a chain of people from both sides and who have shared interests. Network Rail has long been interested in how to improve this bit of railway, I think their ambitions have not so far been to the extent of what we have laid out in this, but they are interested.”

While politicians may go back and forth debating whether the balance of power should sit in London or Cardiff, time shouldn’t be wasted before work begins on the project.

“Clearly, while some things can be done faster than others, it will take some years to the achieve full reconstruction and reconfiguration of the rail network, you’re looking at probably between five and 10 years including building new stations,” Burns says. “But in terms of some of the proposals for active travel… a lot more can be done much more quickly, we think that could be done within five years. Doing anything with railways does take time. The important thing is to get started as quickly as possible.”