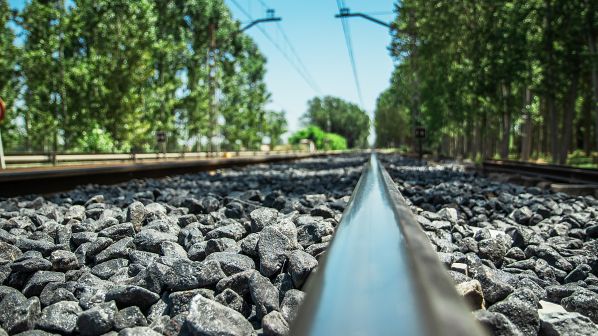 European research project. TESTING of Neoballast is taking place as part of the European Commission’s Fast Track to Innovation programme, with the project allocated €1.59m to support commercialisation. Comsa is the coordinator of the project, and is partnering with Dynamics, Structures and Systems International, Belgium, Talleres Felipe Verdés, Spain, Mapei, Italy, and Sorigué, Spain. Work commenced in 2015 and is due to conclude in November 2019.

The resulting abrasion between ballast particles and the sleeper lead to wear and ultimately a loss of shear strength capacity and ballast layer settlement. The latter attributes to variations in the settlement of the track, which in turn leads to the deviation of the longitudinal profile, lateral alignment and track gauge since the ballast layer’s ability to function effectively declines.

Deviations in track geometry due to ballast degradation is a major challenge for heavy-haul railways. Frequent ballast replenishment is necessary to restore the integrity of the track but at a significant cost to the asset maintainer. Ballast cleaning is one possible solution, but is expensive, so infrastructure managers are often forced to renew the entire track superstructure even before other assets - rails, fastenings and sleepers - have reached the end of their useful life.

With railways seeking to cut maintenance costs and preserve their assets, the search for new innovative ways to minimise the adverse effects of failures associated with ballast aggregate on heavy-haul lines has intensified.

Comsa, Spain, developed Neoballast in collaboration with Mapei, Spanish infrasturcture manager Adif, and the Polytechnic University of Catalonia in 2011 with the goal of potentially doubling the lifespan of conventional ballast and improving noise and vibration behaviour. Tests of the product are now underway as part of the European Union’s Horizon 2020 research initiative.

The Neoballast aggregate consists of conventional ballast stone coated with synthetic elastomers generated from recycled motor vehicle tyres with the aid of a binder. The new ballast is designed to reduce the rate of degradation and settlement of the ballast layer and also to reduce maintenance interventions and costs.

Tyres consist of 90% vulcanised rubber, which has extremely durable, strong, and flexible material properties and can maintain their volume under loading. Once recycled, the fine rubber particles are used to coat the ballast aggregate, with the rubber coating increasing the elasticity of the ballast layer which reduces the rate of degradation.

Tests have shown that coating ballast with rubber will offer the following potential benefits:

Preliminary tests to determine the mechanical performance of Neoballast were conducted by the consortium at the University of Granada, Spain, using a triaxial shear test on a track used by passenger trains. Cyclic dynamic load tests ranging from 5kN to 65kN were conducted, which is equivalent to 20-tonne axleloads at a frequency of 5Hz.

Comsa is currently conducting line tests of Neoballast on a 200m section of the Maçanet - Massanes - Caldes de Malavella 1668mm-gauge electrified line in northeast Spain. An outdoor microphone monitoring system, seismic accelerometers and total pressure cells have been installed on the track to conduct the in-field tests, which commenced in June and will continue for several months.

While tests with Neoballast continue in Spain, work has taken place at Transnet Freight Rail in South Africa to investigate the viability of using the aggregate on heavy-haul lines where the mechanical strength of the ballast layer is vital to the stability of the track.

The tests were based on the performance of the mechanical properties of Neoballast compared with the minimum required specifications for heavy-haul lines in South Africa. For example, a sieve analysis of the ballast used for the Neoballast sample ranged from 37.5mm to 53mm, the same ballast size requirement in South Africa. The quantities were also kept constant while the testing methods for abrasion resistance, weathering and soundness, and water absorption were the same.

The objective of the comparative analysis was to see whether Neoballast is effective at reducing the frequency of ballast maintenance and if the aggregate is suitable for use on Transnet’s lines. The results (Table 1) show that Neoballast has a higher abrasion resistance compared with conventional ballast and has the ability to maintain its interlocking properties for a longer period of time since the abrasion resistance is increased, hence the shear strength capacity of the ballast layer is optimised.

Figure 1 shows the expected increase in the service life of the ballast layer due to this phenomenon. The results indicate that the presence of the rubber coating on the Neoballast acts as a crush barrier, directly reducing the number of fine particles produced which normally cause ballast fouling. A reduction in ballast fouling will result in a reduced ballast settlement rate per load cycle. It will also improve the resistance to weathering compared with conventional ballast. Therefore, application of Neoballast on heavy-haul tracks may yield a significant reduction in cost and frequency of maintenance.

In addition, the conventional ballast used on the coal line absorbs more water than Neoballast. Neoballast is less porous than conventional ballast because of tightly packed amorphous particles from the rubber coating that provides isolation to the ballast aggregate. This is a potential benefit since Neoballast facilitates drainage more efficiently.

The fire-resistant property of Neoballast is a particular concern on electrified lines. This was tested in accordance with European standards, EN ISO-19925-2 and EN ISO-9239-1, with the results indicating that Neoballast is flame retardant and will contribute minimally to a fire breakout.

Disposing Neoballast is a potential environmental concern. It is currently disposed in landfill sites in the same manner as conventional ballast with chemical tests showing that the coating is inert in its reaction with the environment and should be treated as normal waste. However, with an estimated service life of 30 years longer than conventional ballast, the environmental impact is significantly reduced. Investigations of future disposal methods are still underway, including proposals to recoat Neoballast for repeated use. The rubber abrasion could also be collected and used in asphalt.

The results of this study show that using Neoballast as a ballast layer on heavy-haul lines is a potentially preferable alternative to conventional ballast applications. Neoballast is more durable and tougher and would result in a decrease in the degradation of ballast particles. In turn, this would reduce the rate of track geometry deterioration resulting in improved track structure stability and reduce the overall cost of track maintenance.

Neoballast potentially meets all the minimum required specifications for ballast used on South Africa’s heavy-haul lines. However, further field investigations are required to ensure that the mechanical properties and performance obtained in test studies are replicated in practice.

As for future commercialisation of the product, Comsa and Mapei founded a new company, Neoballast, in July. The goal is for industrial production to begin by the end of the year and offer the product to market in 2020.